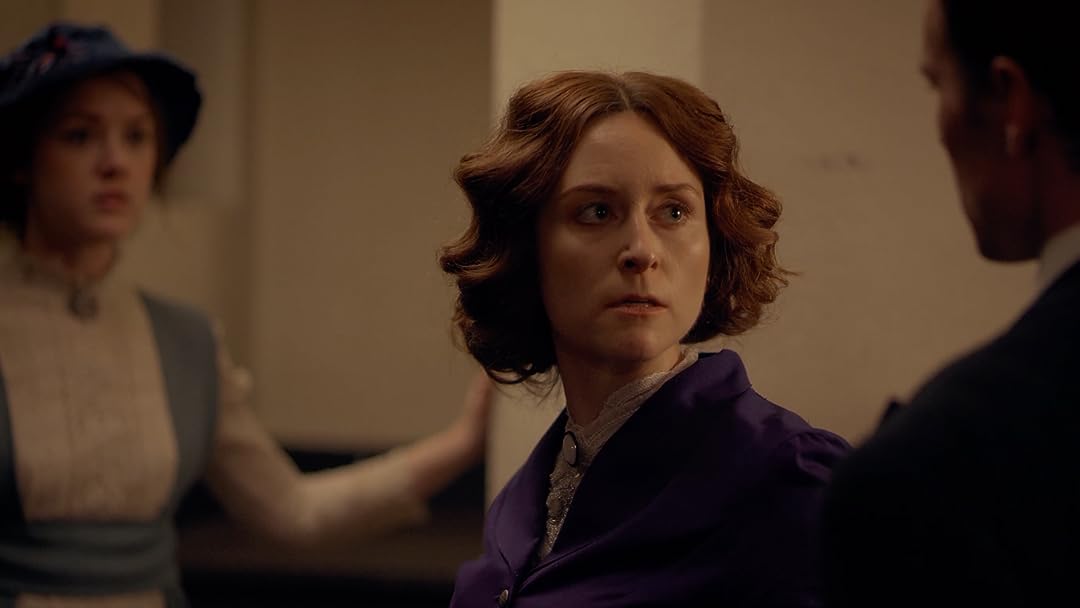 (30)
13min20207+
In the clutches of terminal illness, suffragist Inez Milholland steels herself for the final speech of her tour, rallying the nation to give women the right to vote. As her galvanizing speech reaches a fever pitch, she suddenly collapses. The doctor insists she rush to the hospital, but nothing will stop her or the tide of equality.

S. KallshianReviewed in the United States on November 19, 2020
5.0 out of 5 stars
This film sheds light on somebody we should already know
Verified purchase
This film introduced me to somebody important in the suffrage movement that I was not taught about in school. I loved the acting and the ambiance of the whole film, and it really captured the excitement and intensity (and fear) that I imagine these women were feeling at the time. They couldn't have known that they were so close to achieving their goal of winning the right to vote, but Inez knew it was worth dying for (or living for!)
At what is now the 100th year of this milestone it just feels really good to learn about this amazing woman and take a moment to appreciate the difficult and honorable fight they were in.
One person found this helpful

Andy McKinneyReviewed in the United States on March 6, 2021
4.0 out of 5 stars
fervent, moving
Verified purchase
This short film shows the last bit of the life of a suffregett orator. She is quite ill, falling down even, but continues to inspire her fellows by the passion and logic of her speeches. Before she succumbs to the final trump, her doctor asks "Is it worth dying for?" She withers him with a look as if to say the question of liberty for women answers itself. In reply, she says "It is worth living for."
"Are we not human beings?" She asks. Four years after her death American women from sea to sea got the vote, universally and not in dabs here and there as was the situation prior to the amendment to the Constitution.
"Into Light" is a very professional bit of filmmaking, up to the highest standards in all respects.

Kindle CustomerReviewed in the United States on October 30, 2020
5.0 out of 5 stars
A must see for all
Verified purchase
Were it not for women like Inez Milholland, I would hot have been able to fulfill my dream of becoming a female police officer in the 1970's. Inez gave her life so that we could live ours - a women free to choose a career traditionally held by men. "Into Light" showcases the lengths to which women and men went to fight for our freedoms, including the right to vote. The movie was well made but obviously could be much longer so the whole story could be told.
2 people found this helpful

Ben DukeReviewed in the United States on November 10, 2020
5.0 out of 5 stars
Wonderful and heartfelt short
Verified purchase
I was captivated by this short. The story of this character Inez who paved the way for so much. It shows you how deep the need was for womens voices to be heard. The last line really captured the essence of the piece for me as it was clear there was nothing that would stop her from doing what she had set out to do. I wont reveal it on this review. Wonderfully articulated direction and the acting is superb. Even the extras demonstrated a lot of emotion and I loved how this all came together. I would love love love to see a broader story of this character.
One person found this helpful

Rae HoltzReviewed in the United States on October 30, 2020
5.0 out of 5 stars
Outstanding film on Women's Vote
Verified purchase
This short video, "Into Light" is noteworthy and very admirable in the content. Amy Walker is a wonderful actor, playing Inez Milholland. I was there in the audience, her speech gave me shills. The historical accuracy from the location, costumes, to lighting was very well done. The film itself is amazing. It was a joy for me to be part of the film making.
Rae H
One person found this helpful

Margaret R. CooneyReviewed in the United States on November 21, 2020
5.0 out of 5 stars
Women's Martyr Beautifully Portrayed
Verified purchase
Inez died campaigning for women's rights! Think about that; it really happened. She should be a national hero and we all would feel more powerful and patriotic if we knew more about her. This movie is an exceptional if brief portrait of a remarkable women. I want to see the whole film - it will be an inspiring lesson to young women that not only do men have heroic, real life models but women do, too. And it would inspire men and boys as well, since her story is epic, selfless and universal. She spent her life doing what she believed in and seems to have become a beloved figure to American women. Thank you so much for making this captivating movie and I hope you can continue to tell her story.

ishtar maidenReviewed in the United States on November 29, 2020
5.0 out of 5 stars
A dramatic picture in the History of Women's Fight for the Vote
Verified purchase
Into Light is the Stirring truth showing what moved the Suffrage Martyr Inez Milholland to sacrifice life for the principle of Equality. Milholland is certainly that rare hero, who put Equal Rights above her own life. Amy Walker and the director and crew of INTO LIGHT keep this story from being a melodrama; instead, it is a authentic tribute to the courage of women. Beautifully filmed and scored, this is an important film to understand and celebrate our right to vote. Amy Walker is brilliant and her script is firmly rooted in Milholland's biography. See this film in this Centennial year for the 19th amendment, granting women the right to vote.

Amazon CustomerReviewed in the United States on November 16, 2020
5.0 out of 5 stars
How Can Any Woman Not Vote After This?
Verified purchase
This film is a true glimpse of the fight and struggle women had to go through to give us the right to vote. A right we as women are exercising today. What a beautiful film that tells the story of the brave and resilient Inez Milholland and the incredible performance by Amy Walker who brought Inez's respectable character to life. A film that is a must watch by every woman and man that believes in equal rights.
See all reviews
Back to top
Get to Know Us
Make Money with Us
Amazon Payment Products
Let Us Help You
EnglishChoose a language for shopping. United StatesChoose a country/region for shopping.
© 1996-2022, Amazon.com, Inc. or its affiliates