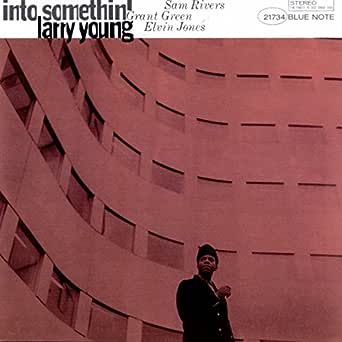 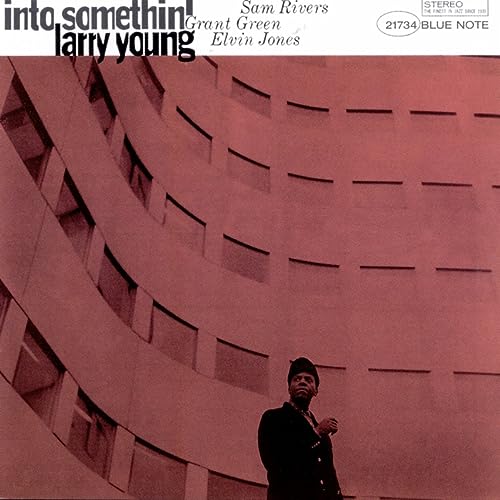 Listen Now
Buy MP3 Album $6.99
Your Amazon Music account is currently associated with a different marketplace. To enjoy Prime Music, go to Your Music Library and transfer your account to Amazon.com (US).

D.R.L.
5.0 out of 5 stars Young-Green-Jones are Into Somethin' Good
Reviewed in the United States on November 15, 2012
~ During the autumn 1964 - spring 1965 period the trio of Grant Green (guitar), Larry Young (organ), and Elvin Jones (drums) recorded four stellar sessions for Blue Note records. This review summarizes the four resulting albums / CDs so that the reader can make an informed buying decision.
~ At the time of these recordings, Grant Green was already an established star and served as `the house guitarist' for Blue Note. Over the years, Green would record with a virtual who's who of the jazz organ (including Brother Jack McDuff, Sam Lazar, Baby Face Willette, Gloria Coleman, Big John Patton, and Jimmy Smith); however, nothing surpasses his guitar-organ-drums sessions with Larry Young and Elvin Jones. At the time of these recordings, Jones was best known as the hard-driving drummer in the John Coltrane band, while Larry Young was earning a reputation as "the John Coltrane of the organ" because of his distinctive modal approach to the Hammond B-3 at a time when Jimmy Smith's blues-based soul-jazz style defined the sound of the organ. Indeed, the Young-Green-Jones recordings represent a significant departure from the earlier soul-jazz recordings that Green made with organist Big John Patton and drummer Ben Dixon. While Green and Young get much of the credit for the harmonic and melodic success of these four albums, the contribution of Elvin Jones is significant and invaluable.
~ Young's 48 minute debut as a leader on Blue Note was the wonderful "Into Something" album recorded 12 November 1964. Tenor sax man Sam Rivers adds his distinctive voice to the Young-Green-Jones trio. The quartet performs four Young originals plus one original by Green. Other than the blues "Backup," the music is fairly complex, grooving in its own fashion and showing that Young was absorbing Coltrane's modal excursions. Stand outs include Young's relaxed groove "Tyrone", Green's Spanish-tinged "Plaza de Toros", Young's gentle "Paris Eyes", and the blues "Backup". Two versions of Young's "Ritha" are included; one with and one without sax.
~ Highly recommended.

Eddie Landsberg
5.0 out of 5 stars Great Larry Young/Grant Green/Elvin Jones Session ! ! !
Reviewed in the United States on May 22, 2000
This session features a young, tame, deep and burning Larry Young. Elvin Jones is THE killer drummer, though I would much rather have loved to hear Ben Dixon on this particular album.
I've mentioned how Billy Gardner and John Patton kinda set the pace for organists like Larry Young. Larry basically took the soulful and blues entrenched progressive organ styles of these mentors, and got into the Coletrane sound, transcending the blues and getting into some pretty heavy soloing. Today, the organists that tend to reflect his playing the most seem to be Mel Rhyne, Bill Heid and Larry Goldings.
Larry Young seemed to be ever searching and experimenting. - - His UNITY album practically single handedly tore open everyone's conception of the B-3... then he got into the fusion thing with LIFETIME. This album represents a much more refined, swinging yet still cutting edge side of him. It is starkly modernistic compared to Groove Street (which has more of a Freddie Roach influence.) Sam Rivers' playing is brilliant in itself and far more than a footnote to this session.
By the time he did this album, Larry Young had really started to develope his own feel, however, if you like this album, I really suggest trying to hunt down those old George Braith/Billy Gardner sessions. Albums like SOUL STREAM and EXTENSIONS really show you how underated Billy was. However, Larry Young was definitely a genius, who had a LOT to say and the ability to realize it. As Jazz got more progressive, he would definitely show that the B-3 was up to the challenge and go well beyond the blues and boogaloo thing, though its all good.
This is way back in 1964, and in many ways still ahead of the times. - - Check out some Big John Patton, as well as Bill Heid and Mel Rhyne after you get this.
Read more
25 people found this helpful
Helpful
Comment Report abuse

N. Dorward
4.0 out of 5 stars Young's first album for Blue Note
Reviewed in the United States on July 1, 2002
This is the 2nd disc by the Grant Green/Larry Young/Elvin Jones trio; whereas the first was credited to Green, this one is credited to Young, marking his debut as a leader on Blue Note. It augments the group with the tenor saxophonist Sam Rivers, who plays well but sounds a bit superfluous to the basic direction of the music: it's perhaps symbolic that on one track, "Ritha", Rivers was present on the alternative version but absent for the released version. Unlike Young's next album, _Unity_, which is primarily a compositional showcase for Woody Shaw, this one concentrates on Young's compositions: "Tyrone" is a relaxed blues waltz, "Ritha" a memorable, lyrical line which ought to be performed more often; "Backup" is a blues, & "Paris Eyes" a simple but likeable melody. "Plaza de Toros" is a Green composition, & the fieriest thing on here.
A very good disc, though not a patch on _Unity_. It is the only disc besides _Unity_ under Young's leadership on Blue Note that ought to be considered essential.
Read more
9 people found this helpful
Helpful
Comment Report abuse

Anders Jonasson
5.0 out of 5 stars Young went his own way
Reviewed in the United States on December 4, 2001
At first you think that you hear Larry Goldings...but when listening carefully..one can hear that the B3 sound is slightly lighter and does not have the same "punch" as Goldings.. but the modal licks sounds familiar.
Larry Young was just a fantastic B3 player that went his own way.. already here in 1964 he played very different from anyone else.Sam Rivers plays beautiful at times and at othertimes his playing is "outside" but it fits well with the music. Rivers is a gifted composer.. as a musician I have played some of his songs myself, that is the only thing I miss here one or two compositions by Rivers. Elvin Jones are the perfect drummer for this kind of music.. and Green does a nice job as always.
All songs are more or less highlights... but I in paricular like the joyful mode on Youngs compositions "Ritha" and Paris Eyes"
As a Green fan....I do not think that Green ever played better than what he did in the company of Larry Young.
Read more
6 people found this helpful
Helpful
Comment Report abuse
See all reviews

Andy K
5.0 out of 5 stars If You Like Jimmy Smith...
Reviewed in the United Kingdom on August 5, 2017
Verified Purchase
Larry Young could always give Jimmy Smith a run for his money, and like Larry's Unity lp, this sounds very cool. The sleeve is one of Blue Note's best, complementing the sound beautifully. If you're not familiar with L.Y., you could do worse than starting here...
Read more
Report abuse
See all reviews