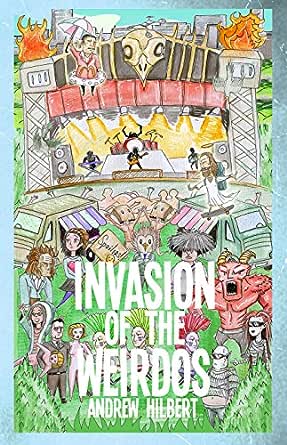 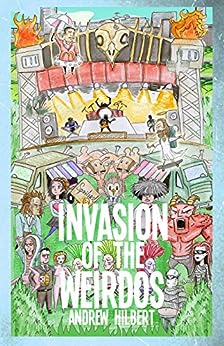 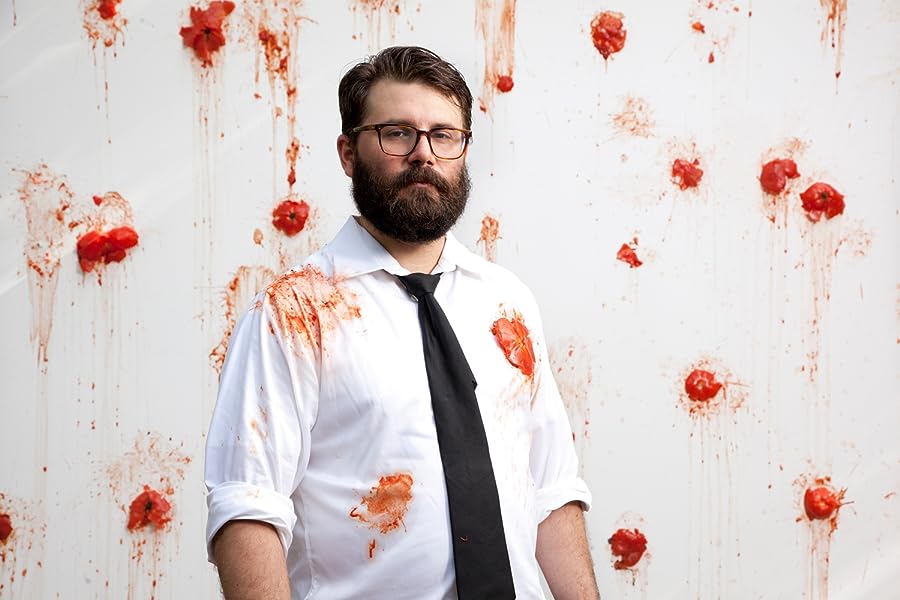 Invasion of the Weirdos Kindle Edition

Fanatic for Books
5.0 out of 5 stars The Future is Stranger Than You Think
Reviewed in the United States on January 30, 2018
Verified Purchase
Funny, slightly frightening, and in the end, incredibly moving. Should be a mini-series.
Read more
Helpful
Comment Report abuse

Adrian Shotbolt
5.0 out of 5 stars Bonkers, but brilliant!
Reviewed in the United States on April 18, 2017
Well, this is certainly one of the most absurd books and I’ve read in quite some time. Andrew Hilbert’s ‘Invasion of the Weirdos’ takes place in his home town of Austin, Texas and reads like a mash-up of TV show ‘My Name is Earl’ and Kevin Smith’s ‘Mallrats’. Austin, Texas is a crazy place. I’ll give you a glimpse into some of the characters inside Hilbert’s book: Tobak Nrothak is the last living Neanderthal (click), who also happens to be highly skilled in robotics! (who would’ve thought?!), and the only person in Texas with a three-dimensional, holographic business card that talks! San Antonio also plays home to the God-brother, Manalo- a guy who thinks the British and Americans were actually lost tribes of Israel! Manalo is a religious podcast host trying to spread the gospel to the masses. We also have a group of nihilistic, anarchistic wannabe art students, an ex-communicated government operative that can’t let go of the past (or his memories of George W. Bush), so he tries to win his way back into government favour by infiltrating the group in the belief that they are terrorists. We have a couple of otherworldly aliens and Ephraim (Darnell from My Name is Earl, I’m sure of it). Now, Ephraim is a man who simply wants to hug kids! And to do this he wants to build a robot that he plans on setting up outside of his favourite McDonald’s!…yes, the consequences of a machine-hugging robot are absurdly funny! ‘ Invasion of the Weirdos’ is definitely out there but Hilbert’s love letter to Austin, Texas and its folk is genuine and damn hilarious. And I’m talking laugh out loud hilarious.

Each chapter is told from a different perspective and it works brilliantly. The chapters are short and sharp, the dialogue is superb, incredibly funny and somehow Hilbert pulls all of these weird and bonkers characters together towards the stories wacky conclusion, where each one has their own part to play. ‘ Invasion of the Weirdos’ is a bizarro gem of a book. It is one that genre fans will devour and if you’re looking for something completely different but outrageously funny then look no further. Last year, Adam Howe cracked me up with ‘Tijuana Donkey Showdown’ and this year it looks like it is the turn of Andrew Hilbert. Fabulous and funny as.

As a side note: the cover art suits the book perfectly, so well done to Luke Spooner.

Robert Ashcroft
5.0 out of 5 stars Free Robot Hugs. Intermensional aliens. Third Eye Maple Syrup.
Reviewed in the United States on October 23, 2018
The author's exuberant style and bizarro antics lay out a landscape of slapstick comedy that shifts between self-deprecating and delightfully self-indulgent. There are some really unique plot lines here, sometimes so eye-poppingly insane that you feel the book must be splintering into a set of loosely connected threads. But then characters collide, themes interweave, and you think, "My god, is this book speaking to me somehow?" You'll say, "It's just supposed to be funny," but then be stuck in traffic, thinking about a neanderthal that makes holographic business cards and pondering the nature of cults.
Read more
One person found this helpful
Helpful
Comment Report abuse

Benoit Lelievre
4.0 out of 5 stars Doesn't take itself seriously, but in a good way
Reviewed in the United States on May 14, 2017
A sprawling satire of Austin and art in the twenty-first century, in general.

That is the best way I could describe the experience of reading INVASION OF THE WEIRDOS. Coming from a hipster capital myself (Montreal), I am very aware of problems that arise when you mix creativity (or lack thereof), politics and corporate culture. There is a profound vacuum in meaning and people who deem themselves artists or "creative types" try to fill it up because it's the only way they'll ever feel like they're contributing to society. And it can either be depressing or the funniest thing.

I was reminded of Richard Linklater's Austin classic SLACKERS when I read INVASION OF THE WEIRDOS because it keeps moving between pockets of people and featuring an increasing number of characters who don't all matter to the story. This book is very light hearted, but it's Hilbert's most accomplished vision yet. He's an author you should get to know.
Read more
Helpful
Comment Report abuse

Michael Adams
4.0 out of 5 stars Funny & Slightly Twisted
Reviewed in the United States on July 24, 2017
This is one strange trip of a book. Several storylines weave through one another, and eventually colliding with a literal bang. Political infiltrators and assassins cross paths with avant-garde artists, government-sponsored hallucinators, men on missions of delusion and misplaced dreams, entities capable of bending space-and-time to their very wills, and the worlds last Neanderthal man. Once you have the rather large and eclectic cast of characters committed to memory, the pace never relents, offering funny and slightly twisted takes on any variety of subjects. Good for a bizarro fans looking for a fun, fast sendup of fast-food consumerist culture.
Read more
One person found this helpful
Helpful
Comment Report abuse

Robert D. Hilliard
5.0 out of 5 stars He's the best. If you like hilarious
Reviewed in the United States on May 2, 2017
If Andrew Hilbert wrote the backs of cereal boxes, I'd read them. He's the best. If you like hilarious, truly strange fiction that leaves you with a sore belly from laughing, grab a copy. There's a complexity with Andrew's writing that I appreciate because he makes it read so easy, when in actuality, it's absolutely not.

If you're looking for a new book to freak out the guy next to you on the plane, grab Invasion of The Weirdos.
Read more
3 people found this helpful
Helpful
Comment Report abuse

Gabino Iglesias
5.0 out of 5 stars Wonderfully weird
Reviewed in the United States on October 27, 2017
Okay, here's the thing about Hilbert: the way he mixes social commentary and critique with scatological humor and pure, unfiltered weirdness is quite special. He writes to get a message across, but does so while knowing that entertainment should be the first thing a book provides. In this case, you get a few narrative weaved into one, and the result is funny, strange, sexy, and unlike anything else out there. I think you should do a little dance and click on that buy button already. You won't regret it.
Read more
Helpful
Comment Report abuse

kelby
5.0 out of 5 stars Invasion
Reviewed in the United States on May 17, 2017
Invasion of the Weirdos was my introduction to Andrew Hilbert and after reading it, I'm definitely going to hit his back catalogue for more. Hilbert has created the Texas equivalent to South Park, in a nutshell. There are so many wild characters in this one and they show up all over the place as the plot weaves in and out between sex doll-loving assassins and so-anarchist-they-bleed-black art groups and oh, so many more. The book seems to satirize the "Keep Austin Weird" slogan and does so in a funny and immensely entertaining way. I definitely recommend it.
Read more
One person found this helpful
Helpful
Comment Report abuse
See all reviews

Thomas Joyce
4.0 out of 5 stars Bizarro at its best!
Reviewed in the United Kingdom on March 23, 2020
Verified Purchase
I've read some of Hilbert's shorter fiction before, which is mainly in the realm of horror, usually with a twist of his unique brand of humour. This is my first time reading something longer from him, and it does not disappoint. It is less horror and more bizarro, but it does contain elements of horror, as well as science fiction. And it absolutely maintains his sense of humour throughout.
Each chapter is told from the point of view of a wildly different character (well, different except for how similarly bizarre they are...) until Hilbert brings them together in a hilarious way. The dialogue is brilliant, as are the insanely funny characters, from a disgraced (and disgraceful) spy to a simple man who only wants to replace happy meal toys with hugs. Not to mention the alien beings obsessed with "winky" and the art collective with dangerous levels of disdain for everything and everyone. And the last of the neanderthals, with the aphrodisiac song and dance...
It's great fun and definitely worth checking out, whether you need a break from your usual read or just want something refreshing.
Read more
Report abuse
See all reviews