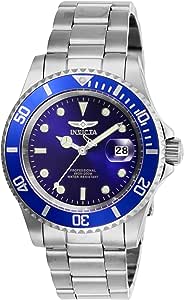 4.6 out of 5 stars
4.6 out of 5
2,829 global ratings
How are ratings calculated?
To calculate the overall star rating and percentage breakdown by star, we don’t use a simple average. Instead, our system considers things like how recent a review is and if the reviewer bought the item on Amazon. It also analyzes reviews to verify trustworthiness.

Neil
5.0 out of 5 stars Cheap Dive watch - Great for the price
Reviewed in the United States on January 28, 2020
Style: 26970Verified Purchase
Firstly, beyond how to how to tell the time from them, i know virtually nothing about watches - so if you want comparisons between automatic, or quartz etc,how it compares to similar watches in the same price range, or anything technical then look elsewhere.

I work as a diving instructor. I don't need the watch for diving- as like most people who dive regularly i use my dive computer rather than a wrist watch. However i do always wear a watch to allow me to ensure that the dive trips/ snorkel trips are on schedule etc. Time management is a part of the job.

The one "must have" criteria i have for a watch is that i don't have to remove it for Scuba Diving - beyond that i'm not too fussy really. I normally wear a cheap Casio as they do the job fine and if it flooded (they never do) it doesn't cost much to replace. My watch strap on my old Casio broke so I decided it was time for a new watch. I haven't worn an analogue watch in years and thought i'd see if i could get an inexpensive one that looked good and was capable of using when diving. Had a bit of a wander round Amazon and settled on this one. - I bought it in December when the price had dropped to $45 - about double the price of my Casio

First Impressions
Looks good, not too big and clunky, and the bracelet looks fine, but was waaaay too big for my wrist - I have narrow wrists admittedly, but unless you have arms like tree trunks then you will almost certainly need to remove a few links - see attached photo. Get a jeweler to do it, or you can find "how to" videos on you tube. There are no jewelers anywhere near me so i did it myself - found some of the pins were relatively easy to remove and others weren't moving for love nor money. I've never tried adjusting a watch bracelet previously, so have nothing to gauge it against, but i don't think the pins are high quality, though it could be incompetence on my part, or a combination of the two.

Having adjusted the strap, the watch itself runs fine. The screw down crown allows easy adjustment. simply unscrew the crown, and then you can pull it out to the first position to adjust the date, then pull it out to the second position to adjust the time. once done, push the crown in two positions and screw the crown back in...... the last step it the really important one for ensuring the crown is watertight - if you don't screw it back in fully then your watch will flood. In a previous review I saw photos of a flooded watch, and you can see from the gap between the crown and the watch body that it hasn't been screwed in - I don't know for sure if he took it into the water like that but it it would have caused it to flood if he had.

Anyway, most importantly for me, mine has remained water tight. I've taken it on numerous dives, to a max depth so far of 80 ft and had no problems.

Basically this watch has ticked all the boxes i need it to on price and functionality, and looks good. I almost marked it down a little for the bracelet pins, but i suppose you do get what you pay for, and overall the value for money is great.

It's the first time I've gotten round to writing a review, and it rambled on a bit, but hopefully it's helpful.

Amazon Customer
5.0 out of 5 stars Very similar to my Rolex Submariner
Reviewed in the United States on December 16, 2019
Style: 26970Verified Purchase
I love my Rolex, but there are just times that I don't want to wear an expensive watch (scuba diving, water sports, on the boat, etc.). I wear the Invicta and don't worry about leaving it in my gym locker or wearing it in the ocean. It's actually quite remarkable that it has the same weight and looks of it's very expensive lookalike. It simply is a good looking watch and I love wearing it.
Read more

Vlad
5.0 out of 5 stars Quartz version of 8926 OB
Reviewed in the United States on October 10, 2019
Style: 26970Verified Purchase
I must say this watch is a bargain.
Solid case and bracelet, nice finishing.
And the bezel insert allignes perfectly (hello Seiko).
Read more

Tom Smith
3.0 out of 5 stars Looks good, BUT... movement seems flaky
Reviewed in the United States on November 19, 2019
Style: 26970Verified Purchase
I really wanted to like this watch, I own the mechanical version (8926ob), which is better quality. I wanted a quartz version for better accuracy. Maybe I just received a watch with a bad movement.
1) Minute hand jumps forward or backward when hacking
2) Timer dial difficult to turn
3) Not as accurate as my Citizen
4) Minute hand wobbles with each tick of the second hand.
Read more
17 people found this helpful
Helpful
Comment Report abuse

Chuck
5.0 out of 5 stars Excellent watch for the price paid.
Reviewed in the United States on February 25, 2019
Style: 26970Verified Purchase
A great looking dive watch that keeps excellent time. The watch band is not as heavy as on Invicta watches I've purchased in the past, but it does look good and serves the purpose. This watch is well worth the money and I am surprised that there aren't more reviews/sold.
Read more
12 people found this helpful
Helpful
Comment Report abuse

Debbie Snow
1.0 out of 5 stars Watch flooded the first time I wore it. In the pool
Reviewed in the United States on December 13, 2019
Style: 26975Verified Purchase
I needed a watch with a second hand for my Scuba instructor exam. I thought this would be perfect. Tested the day of the exam and this is what it came out of the water looking like. I ended up having to buy a new watch because I didn’t have time to send this back and get a new one. I live in MT exam was in FL. This is the second dive watch I bought from them. The first one the stem broke before I had a chance to get in the water. They used to be quality watches but apparently that changed
Read more

mike
5.0 out of 5 stars Good quality at an excellent price.
Reviewed in the United Kingdom on June 19, 2019
Style: 26973Verified Purchase
I have delayed writing this review until I had the chance to do some diving with the watch, as this was the purpose in buying it. I should say, first of all that I dive professionally, and was a little concerned as to this watch. However I was totally wrong. Underwater the display is very easy to read, and the bezel rotates with a suitable amount of pressure. I wear latex cuffs, and the watch easily locked over these, but if you have neoprene cuffs, you might want to think about replacing the metal strap with a more easily adjustable rubber one. The watch, so far, is totally watertight and keeps accurate time. I wear my watch all the time, but don't want a great big chunky divers watch, and this is a very nice stylish compromise. All told, and excellent buy that I would not be afraid of recommending to anyone, particularly at this price that I paid from Amazon.
Read more
One person found this helpful
Report abuse

Farook Ahmad
5.0 out of 5 stars Nice watch not as solid or weight as other invicta
Reviewed in the United Kingdom on February 23, 2020
Style: 26974Verified Purchase
A lovely watch, however it's not as solid or has the weight of my other Invicta watches, time keeping it good no issues there, but whatever the case a nice watch for everyday wear
Read more
Report abuse

Jonisuncle
5.0 out of 5 stars Great at the price
Reviewed in the United Kingdom on November 5, 2019
Style: 26973Verified Purchase
Looks good and if you didn’t know, it could be a very expensive watch. A bit too much like a fake Rolex for my real comfort, but others may be very happy with that.
Read more
Report abuse
See all reviews