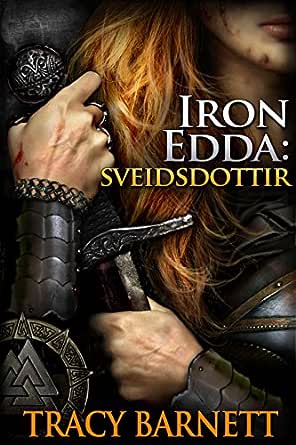 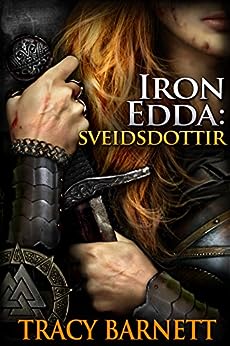 TheDarkFiddler
4.0 out of 5 stars Great World, Story Just Falls Short
Reviewed in the United States on November 8, 2018
Verified Purchase
Overall this is a wonderful story, placed in a world with some great things going on. However, the pacing is definitely a bit off (very slow in the early parts and flying by in the final chapter), and it leaves you wanting more of the world at large. As the personal journey of a woman and the people that influence her, though, it definitely lands; Sigrid's journey is intriguing, and you definitely feel for her struggles.
Read more
Helpful
Comment Report abuse

Matt Roberts
5.0 out of 5 stars Enjoyed it thoroughly!
Reviewed in the United States on August 12, 2015
Verified Purchase
An amazing story with rich characters. Sveisdottir provides a finely painted backdrop for Tracy's Iron Edda: War of Metal and Bone RPG. I know that the RPG came first, but I ended up not playing it until after reading Sveidsdottir. Now that I've experienced both, I can say that they feel like perfect companions. If you've played War of Metal and Bone, this book is an amazing opportunity to get deep into the setting that Tracy created for the game.

All in all, Sveidsdottir is a great read and a great start for an author that is only going to keep bringing it.

Dawn Vogel
4.0 out of 5 stars Norse Steampunk Fantasy
Reviewed in the United States on April 5, 2018
While I love both Norse mythology and steampunk fantasy, this book was not entirely what I hoped it would be.

The place where Sigrid, her family, friends, and some enemies live is threatened by attacks of dwarves who control metal constructs. A former member of their community returns and shows them that he can control the bones of a long-dead giant, and invites others to learn to do the same. Sigrid leaps at this opportunity, despite the fact that it means leaving behind her family, friends, and brand-new wife.

Iron Edda: Sveidsdottir purports to be a journey of self-discovery for Sigrid, but the plot makes it feel like it’s more about Sigrid being extremely powerful to begin with, particularly when she learns to control the spirit of the Valkyrie that she possesses. When she then combines that with the power that bonding with the bones of a long-dead giant gives her, she becomes even more of a formidable force, but at that point, the book focuses more on her being powerful than her truly learning anything about herself.

This novel follows not only Sigrid, but also three other point-of-view characters. Unfortunately, the chapters based on other characters’ points-of-view are uneven, and don’t really seem to add much to the story. The early chapters featuring Sabina give a good outsider’s perspective on what is happening, allowing the author to explain some of the features of the culture and the world without it feeling too forced. But the other point-of-view characters don’t really lend much to the telling of the story.

Though written at a young adult reading level, the story is more about adults. However, it doesn’t contain explicit sexual content or particularly graphic violence, so it still seems appropriate for YA readers. Beyond my own criticisms, fans of Norse steampunk fantasy will still find things to enjoy in this book.

(Excerpted from a review originally posted at Mad Scientist Journal.)

H. Cummings
4.0 out of 5 stars Interesting Norse-inspired fantasy
Reviewed in the United States on May 1, 2015
I bought this not knowing quite what to expect. I back the Iron Edda Kickstarter, so I knew there would be bound bones of giants, but that's about it.

Sveidsdottir primarily follows a young-woman born with the power of a Valkyrie who then gains the power of having the bones and spirit of a centuries-dead giant bound to her of course, with great power comes great responsibility and it is this lesson our protagonist must learn as she sets out to prevent Ragnarok.

The descriptions are evocative and the action moves along at a good clip. The characters are interesting and well-developed with ambitions, dreams, and flaws we can relate to. It's a good, quick read set in an interesting fantasy world that is at once new and original yet not unfamiliar.

My only issue with Sveidsdottir is something I think is a personal hang up. It's written in a shifting viewpoint 1st person present tense. The only other time I've tried to read a shifting viewpoint first person, I found it extremely difficult because it would take me several sentences to figure out which character's eyes I was looking through. Tracy Barnett helpfully labels each chapter with the name of the viewpoint character, so that helped. It's a narrative style I'm not used to and I'm not sure I particularly like, but some quick research shows it seems to be a fairly common, modern style for this type of fiction. Like I said, it's a personal hang up, and if it doesn't bother you, then you'll zip right through this story.

Sveidsdottir is an excellent freshman effort from Tracy Barnett and I look forward to seeing where the story goes from here.
Read more
3 people found this helpful
Helpful
Comment Report abuse

B. P. MacFadden
4.0 out of 5 stars I loved it. It’s a very diverse set of characters
Reviewed in the United States on September 1, 2015
Just finished a read through of Iron Edda: Sveidsdottir by Tracy Barnett of Exploding Rogue Studios, and as would be expected of me reading a novel about a part-valkyrie, I loved it. It’s a very diverse set of characters, with changing points of view that never feel like they interrupt the flow of the story and instead work together to enhance the plot. Without giving away any spoilers, Sigrid is a very deep character who undergoes a complete metamorphosis throughout the book, both as a person and as a source of power within the world. Traditional Norse mythology is tweaked just enough to make it fresh but still respect the origins, and boy will you enjoy Fenrir.
Read more
Helpful
Comment Report abuse

Brian
4.0 out of 5 stars A Terrefic New Take on Norse Fantasy
Reviewed in the United States on June 8, 2015
Iron Edda: Sveidsdottir is an excellent first novel. The story is well paced, with each segment having weight, instead of always pointing towards the important future action that so many fantasy novels do. This is not traditional Norse fantasy in the slightest but if you go into it with an open mind you will have a ton of fun.
Read more
Helpful
Comment Report abuse

Josh Albritton
5.0 out of 5 stars Fantastic tale of magic, sacrifice and heroism!
Reviewed in the United States on June 16, 2016
I backed the Kickstarter based on how wonderful the world is that Tracy created in the related role-playing game. I was delighted in how amazing the story I received is.

Tracy created a variety of powerful and fully realized characters who struggle to protect their home and families. They do what they think hey must, sacrificing and dealing with the consequences.