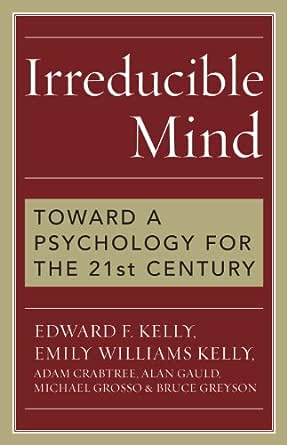 Irreducible Mind: Toward a Psychology for the 21st Century Kindle Edition

Flip to back Flip to front
Audible Sample Playing... Paused   You are listening to a sample of the Audible narration for this Kindle book.
Learn more
ISBN-13: 978-0742547926
ISBN-10: 0742547922
Why is ISBN important?
ISBN
This bar-code number lets you verify that you're getting exactly the right version or edition of a book. The 13-digit and 10-digit formats both work.

pp. 153 of Proof of Heaven: A Neurosurgeon's Journey into the Afterlife, Simon & Schuster, 2012

For those still stuck in the trap of scientific skepticism, I recommend the book Irreducible Mind: Toward a Psychology for the 21st Century, published in 2007. The evidence for out-of-body consciousness is well presented in this rigorous scientific analysis. Irreducible Mind is a landmark opus from a highly reputable group, the Division of Perceptual Studies, based at the University of Virginia. The authors provide an exhaustive review of the relevant data, and the conclusion is inescapable: these phenomena are real, and we must try to understand their nature if we want to comprehend the reality of our existence.

-- Eben Alexander III, MD, Neurosurgeon and author of Proof of Heaven and The Map of Heaven

The authors have not only plausibly argued that the empirical and conceptual horizon of science, particularly the science of the human mind, is both capable and in dire need of expansion, but―and I use this strong term deliberately―they have proven it. -- Andreas Sommer, junior research fellow in history and philosophy of science, Churchill College, University of Cambridge, Journal Of Mind and Behavior

[A] comprehensive review of empirical evidence that questions the assumption that 'properties of minds will ultimately be fully explained by those of brains.'. . . Kelly et al. deserve to be praised for their courage and scholarship in dealing with such a controversial topic. -- Alexander Moreira-Almeida Harold Koenig, Duke University, Journal Of Nervous and Mental Disease

Thoroughly scientific, systematically reasoned and courageous. . . as exciting and enjoyable as it is provocative and profound! -- David J. Hufford, Professor Emeritus of Humanities and Psychiatry, Penn State College of Medicine

Irreducible Mind is an enormous and daring enterprise. Its scholarship is impressive. . . and made me think long and hard about many issues. -- Etzel Cardeña, Professor of Psychology, Lund University, PsycCRITIQUES

[A] must-read for anyone working in consciousness studies, psychology and the history of science. -- Jonathan Edelman, Oxford University

[A] monumental work. . . . Only a very resistant observer will remain unpersuaded that a proportion, as least, of all this carefully evaluated data presents a significant challenge to conventional views. -- Paul Marshall, PhD, BSc, RGN, RMN, Journal of Consciousness Studies

[A] sustained, sophisticated, and empirically based critique of contemporary cognitive psychology and mainstream neuroscience. . . the implications for the study of mind, consciousness, and religion border on the unspeakable. -- Jeffrey J. Kripal, Rice University, Religious Studies Review

[B]rilliant, heroic and astonishing . . . a scientifically rigorous and philosophically informed critique of various contemporary orthodoxies in mainstream psychology, especially the idea that the human mind (including consciousness and our sense of free will and personal agency) is nothing more than a material entity and can be fully explained in terms of brain processes. -- Richard A. Shweder, Harold Higgins Swift Distinguished Service Professor, Department of Comparative Human Development, University of Chicago

Irreducible Mind [is] yet another book on the mind-body problem. However, this book is different, very different, from all the rest... In the future history of the science of mind, Irreducible Mind may well prove a book of landmark significance, one that helped spark a revolution in the scientific investigation of the nature of consciousness... In the arena of neuroscience of mind, it is the most exciting reading to have crossed my path in years. -- David E. Presti, Professor of Neurobiology, University of California-Berkeley, Professor of Neurobiology, University of California-Berkeley --This text refers to the paperback edition.