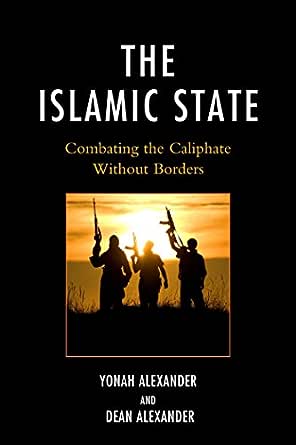 The Islamic State: Combating The Caliphate Without Borders Kindle Edition

Flip to back Flip to front
Audible Sample Playing... Paused   You are listening to a sample of the Audible narration for this Kindle book.
Learn more
ISBN-13: 978-1498525138
ISBN-10: 149852513X
Why is ISBN important?
ISBN
This bar-code number lets you verify that you're getting exactly the right version or edition of a book. The 13-digit and 10-digit formats both work.


Dean Alexander is professor and director of the Homeland Security Research Program at Western Illinois University. --This text refers to the paperback edition.

Yonah Alexander and Dean Alexander’s book The Islamic State: Combating the caliphate without borders adds an interesting addition to the growing canon on the Islamic State (IS). It sets out to ‘address the current gap in realistic assessment regarding the IS threat, the risk it poses, and its broader implications at national, regional, and global levels’ and it does so by meticulously tracing the group’s tactics and strategy. In doing so, Alexander and Alexander rely heavily on data extracted from statements by government, military, and law-enforcement officials as well as newspaper sources. They compile an impressive and thorough amount of data to evaluate the current threat by the IS.... The Islamic State provides an invaluable resource for further research, thoroughly mapping both attacks by the IS as well as counteractions taken by the international community., Behavioral Sciences of Terrorism and Political Aggression

[T]he book can be likened to a handbook in that it provides a comprehensive reference tool of matters relating to IS and the authors have successfully simplified and contextualized complex concepts throughout their analytical overview. The vast reference lists that follow each chapter are testament to the breadth of research and knowledge that has been integrated into this piece of work, which is evident in its reading.The Islamic State: Combating the Caliphate without Borders is a valuable resource that serves to educate readers who are unfamiliar with aspects of IS or, alternatively, consolidates and builds upon the existing knowledge base of the target audience. Its contents can be useful to a wide range of people, including scholars, policymakers, law enforcement and those that have a general interest in the subject matter
, Journal of Asian Security and International Affairs

The Islamic State: Combating the Caliphate Without Borders provides critical background information and analysis about the hybrid terror quasi-state's multifaceted activities and effects in the region and beyond. , Western Illinois University News

The Islamic State is a thorough and authoritative account of the rise of the terrorist army
that specialists and the general public alike will find very useful. -- Peter Bergen, author of Manhunt, The Longest War and Holy War Inc.

This book is a work of profound insight and importance in guiding policymakers and the public as they search for an effective solution. The volume is highly recommended for experts, policymakers, students, and the general public alike. -- Robert F. Turner, Center for National Security Law, University of Virginia Law School

The book is both of enormous practical value to law enforcement and an excellent theoretical introduction to the IS for those who want to learn more about this murderous movement. -- Patrick W. Murphy, former U.S. State Department official

The book is an incredibly intriguing profile and analysis of ISIS. It is also a great reference that offers new insights on foreign fighters and recommendations on combating ISIS. -- Mehmet Nesip Ogun, Vice Rector, American University of Cyprus

This timely, highly analytical, and well-written book is a must read for those seeking a better understanding of the Islamic State phenomenon and its implications worldwide. -- Terry M. Mors, School of Law Enforcement and Justice Administration, Western Illinois University --This text refers to the paperback edition.

Amazon Customer
5.0 out of 5 stars Must Read Book
Reviewed in the United States on November 14, 2015
Verified Purchase
This book succeeds in delivering from birth to current status of IS terrorist organization. It is such a sad disbelief that a terrorist group could control and express such catastrophic behaviors. It is a comprehensive review of thoughts and opinions expressed by world leaders that are very well described by the authors. It is a must read book for International Community to have a deep understanding of this threat. Taking this opportunity, I would like to congratulate Prof. Yonah and Prof. Dean for their great contribution to security studies.
Read more
One person found this helpful
Helpful
Report abuse

Michael A. Benedek
5.0 out of 5 stars Excellent, well-written book by terrorism experts
Reviewed in the United States on January 8, 2016
Verified Purchase
This must-read on ISIS is authored by terrorism experts
and addresses the key issues on this important and complex subject. The
authors fill in many of the current gaps regarding the IS
threat, the risks IS poses, and the broader implications at the
national, regional, and global levels.
Read more
Helpful
Report abuse