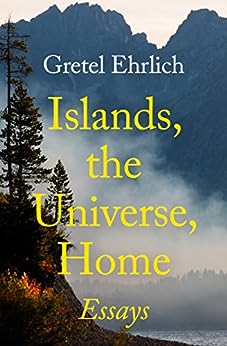 by Gretel Ehrlich (Author) Format: Kindle Edition
See all formats and editions
Sorry, there was a problem loading this page. Try again.
Ten essays on nature, ritual, and philosophy “that are so point-blank vital you nearly need to put the book down to settle yourself” (San Francisco Chronicle).

Gretel Ehrlich’s world is one of solitude and wonder, pain and beauty, and these elements give life to her stunning prose. Ever since her acclaimed debut, The Solace of Open Spaces, she has illuminated the particular qualities of nature and the self with graceful precision.

In Islands, the Universe, Home, Ehrlich expands her explorations, traveling to the remote reaches of the earth and deep into her soul. She tells of a voyage of discovery in northern Japan, where she finds her “bridge to heaven.” She captures a “light moving down a mountain slope.” She sees a ruined city in the face of a fire-scarred mountain. Above all, she recalls what a painter once told her about art when she was twelve years old, as she sat for her portrait: “You have to mix death into everything. Then you have to mix life into that.”

In this unforgettable collection, Ehrlich mixes life and death, real and sacred, to offer a stunning vision of our world that is both achingly familiar and miraculously strange. According to National Book Award–winning author Andrea Barrett, these essays are “as spare and beautiful as the landscape from which they’ve grown. . . . Each one is a pilgrimage into the secrets of the heart.”

“Gorgeously original prose . . . a sensibility drawn to the mystical yet grounded in science.” —Newsday

“A volume of ten deep, wandering essays that at times are so point-blank vital you nearly need to put down the book to settle yourself.” —San Francisco Chronicle

“Her essays, delicately combining interior and exterior exploration, are as spare and beautiful as the landscape from which they’ve grown. . . . Each one is a pilgrimage into the secrets of the heart.” —Andrea Barrett, National Book Award–winning author of Ship Fever

“Ehrlich eschews logic and finds order in paradox. . . . Accounts of a heifer in trouble, training a horse, a wounded eagle, and always, the land and the weather in an infinity of permutations—subjects Ehrlich’s eloquence and passion elevate to poetry.” —Chicago Tribune

“Her observation is never less than diamond-sharp. . . . Her scrutiny is as exact as any naturalist’s; transcendence occurs without veils and mists, and there is often a delicate sense of social comedy.” —The Boston Globe

“A powerful, idiosyncratic collection of naturalistic essays . . . Ehrlich’s prose . . . yields provocative images. . . . Her sharp eye cast unblinking both within and without.” —Publishers Weekly

“Ehrlich combines a naturalist’s eye with a philosopher’s meditations. . . . A lyrical, loving appreciation of landscape and life.” —Kirkus Reviews

“A practical listener . . . [Ehrlich] repeatedly finds common sense in the wisdom of physicists and astronomers. . . . She has a talent for using a prosaic task, a farm chore for instance, as a way of reaching toward something more.” —The Christian Science Monitor

“In one sentence Ehrlich can evoke the brushstrokes of an ancient but timeless canvas.” —TheVirginian-Pilot

“Her Islands offer a blessed cool-down to the hassled city dweller, a green space to be quiet in.” —New Woman

“She writes with the same lyrical ease (as The Solace of Open Spaces), a seamless style that engages readers with that rare combination of intelligence, perception and grace.” —Telegram & Gazette (Worcester)

“Her thoughtful, poetic language is a pleasure to read.” —Library Journal

Gretel Ehrlich is an award-winning writer and naturalist. Born and raised in California, she was educated at Bennington College and UCLA Film School. She is the author of thirteen books, including the essay collection The Solace of Open Spaces (1985), the novel Heart Mountain (1988), and the memoirs A Match to the Heart: One Woman’s Story of Being Struck by Lightning (1994) and This Cold Heaven: Seven Seasons in Greenland (2001), as well as The Future of Ice: A Journey into Cold (2004), and, most recently, Facing the Wave: A Journey in the Wake of a Tsunami (2014). Her prose pieces have appeared in Harper’s, the Atlantic, the New York Times Magazine, and National Geographic, among many other publications. Ehrlich lives in Montana and Hawaii.

Ehrlich's well-received work, The Solace of Open Spaces ( LJ 11/1/85), is a collection of descriptive essays about Wyoming sheepherders, cowboys, Native Americans, and desolate spaces. Her new work begins and ends in Wyoming, but goes beyond, to the Channel Islands off the California coast and to mountain Shinto temples in Japan, where the author made a pilgrimage. Her essays, however, are not tied to place, and thus these leaps enlarge, rather than jar, her writing; she uses place as a point of departure for her images and explorations of architecture, anthropology, a golden eagle, the Yellowstone fire, physics, time, astronomy, and much more. Ehrlich has also published poetry and short stories, including the recent Drinking Dry Clouds: Stories from Wyoming ( LJ 6/15/91). Her thoughtful, poetic language is a pleasure to read. Recommended for general literature collections. Previewed in Prepub Alert, LJ 6/1/91.
-Mary Margaret Benson, Linfield Coll. Lib., McMinnville, Ore.
Copyright 1991 Reed Business Information, Inc. --This text refers to an alternate kindle_edition edition.

The power and mystery of untamed nature in the Wyoming wilderness is the focus of an evocative but sometimes abstruse new collection of essays by Ehrlich (Heart Mountain, 1988; The Solace of Open Spaces, 1985). A transplanted Californian, Ehrlich chronicles life on her Wyoming ranch--training horses, doctoring calves, and irrigating fields--as she seeks emotional lessons in the daily unfolding of nature's wisdom. Exploring such themes as home and isolation, birth and death, and order and chaos, she returns repeatedly to the concept of paradox. Spring brings not only rebirth but death as a sudden thaw floods fields, killing new calves. Summer means fecundity but also destructive fires, which are themselves paradoxical--the black ash left in their wake is the richest of fertilizers; the fires are not the end of a life cycle but perhaps the beginning. ``How fragile death is, how easily it opens back into life,'' writes the author. At her best, in observations like these, Ehrlich combines a naturalist's eye with a philosopher's meditations--an ability that soars in a description of her trip to visit sacred sites in Japan. Occasionally, however, she abandons the rigors of structure and analysis for murkier musings--for example, in a desultory tour of her sprawling acres: ``I search for the possible in the impossible. Nothing. Then I try for the opposite, but the yellow leaves in trees--shaped like mouths--just laugh.'' Still, a lyrical, loving appreciation of landscape and life. -- Copyright ©1991, Kirkus Associates, LP. All rights reserved. --This text refers to an alternate kindle_edition edition.
Read more

M. Love
5.0 out of 5 stars Deep Thought
Reviewed in the United States on July 27, 2017
Verified Purchase
This book was well-written and absorbing. Reading though the chapters I found myself in many different locations. The author's description was oftentimes in her thoughts rather than in real time. I found the prose of what she was observing, feeling, tasting, etc., enlightening. This book kept my attention the entire read. I would recommend this book to anyone who enjoys prose with deep contemplation. Highly recommend this read.
Read more
4 people found this helpful
Helpful
Report abuse

Darrel Drumm
5.0 out of 5 stars Mostly about rural life in Wyoming
Reviewed in the United States on December 17, 2019
Verified Purchase
I enjoyed this book of essays by the author. Her descriptions of Wyoming weather and rural life including working with cattle, were interesting and made it where I could visualize her area of the world. I have one question---did she ever find her dog?
Read more
Helpful
Report abuse

John
5.0 out of 5 stars Truly Poetic
Reviewed in the United States on March 30, 2021
Verified Purchase
The writing in this book is so poetic and charming. She has a gift with language, and makes you want to go explore the great open spaces and reconnect with nature.
Read more
Helpful
Report abuse

Smogranch
5.0 out of 5 stars All her books are good.
Reviewed in the United States on May 17, 2011
Verified Purchase
I've been a documentary photographer for many years, and one of my goals has been to work with Gretel Erhlich. I was first introduced to her work by a friend who suggested I read, "The Solace of Open Spaces." I grew up, partially, on the open range of Wyoming, and her book was the ONLY book I'd read that captured the 1970's ranching life I knew so well. After reading "The Solace of Open Spaces" I quickly burned through every book she penned and now I find myself checking constantly for new books. She's that good. Gretel has had a unique life experience, so her writing and personal narrative are unique, not sure how else to put it. Any book of hers you pick up is a good place to start.
Read more
13 people found this helpful
Helpful
Report abuse
See all reviews

The Great Outdoors
5.0 out of 5 stars The art of storytelling
Reviewed in the United Kingdom on April 9, 2017
Verified Purchase
After reading 'This Cold Heaven' I began a mission to devour Ehrlich's work as she has the most incredibly compelling prose and a lucid yet direct storytelling style which has engaged me more than any other book for years. This was just as good!
Read more
Report abuse
See all reviews