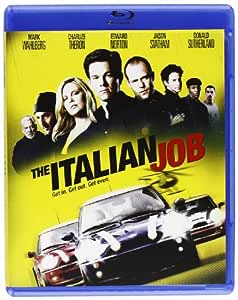 Secure transaction
Your transaction is secure
We work hard to protect your security and privacy. Our payment security system encrypts your information during transmission. We don’t share your credit card details with third-party sellers, and we don’t sell your information to others. Learn more
Details
Ships from
Amazon.com
Sold by
Amazon.com
The Italian Job [Blu-ray] has been added to your Cart

After being double-crossed by a partner, a gang of life-long criminals hatch a brilliant plan to get their gold back and to even the score with the double-crosser. They plan to rob a armored car by creating a massive traffic jam in Los Angeles.

4.7 out of 5 stars
4.7 out of 5
5,749 global ratings
How are ratings calculated?
To calculate the overall star rating and percentage breakdown by star, we don’t use a simple average. Instead, our system considers things like how recent a review is and if the reviewer bought the item on Amazon. It also analyzes reviews to verify trustworthiness.

joel wing
TOP 500 REVIEWER
4.0 out of 5 stars Elaborate heists action & real characters in the cast lead to highly entertaining movie
Reviewed in the United States on December 13, 2020
Verified Purchase
This is only VERY loosely based upon the 1960s original the Italian Job. It has a heist and it uses mini-Cooper cars otherwise this is a completely new movie. It revolves around schemes and revenge. It’s a very smart crime story.

The movie centers on a group of thieves led by Mark Wahlberg. One of the gang betrays them however and Wahlberg vows to get payback.

The robberies are very well done. To explain them would be a spoiler but they are right up there with the best as they are highly sophisticated and elaborate. It’s also where all the action comes from such as a high speed chase between a helicopter and the min-Coopers.

There’s also a large ensemble cast and they make each one of Wahlberg’s gang a character. Seth Green as Lyle for example claims he invented Napster, has a motorcycle he can barely ride because it’s too big for him, and wants a stereo system that will blow the clothes off of women.

All together it makes for a great heist film.
C
Read more
One person found this helpful
Helpful
Report abuse

Mushroomie
5.0 out of 5 stars Freaking Awesome Movie!!!
Reviewed in the United States on October 29, 2017
Verified Purchase
What a Awesome Movie!!! Heard good and bad reviews but I was captivated with the movie the whole time! Loved the rendition of Money by Pink Floyd with the movies own lyrics. A Must see and the Actors all I Love in other films so all around a Awesome Movie!! Thanks Amazon for having it on your Prime List! To bad it leaves prime the end of this month. A must see!
Read more
6 people found this helpful
Helpful
Report abuse

K. Wyatt
4.0 out of 5 stars The Italian Job - A very good heist/caper movie!
Reviewed in the United States on December 22, 2003
Verified Purchase
"The Italian Job" is a good, fun and intelligent "heist" type movie predicated on the revenge factor. I found this movie to be quite entertaining from the opening scene all the way to the closing scene which is a bit unusual for these types of movies.
Mark Wahlberg has certainly come into his own as a superstar and he quite well proves it with his performance in this movie. The ever beautiful and alluring Charlize Theron stars and performs quite admirably in this movie. The supporting cast of Edward Norton, Seth Green, Jason Statham, Mos Def, Franky G and a brief but poignant performance by Donald Sutherland all of which deserve high praise for their collective performances which combined, all bring this movie to a new height.
Director, F. Gary Gray also deserves praise for bringing this great heist/caper movie to fruition and putting together such a wonderful cast. The score for this film perfectly enhances the overall feel of the movie.
The Premise:
Charlie Croker (Mark Wahlberg) has planned the perfect heist and carried it out perfectly with his crew as they go to Italy to steal millions of dollars worth of gold bricks. The one thing he didn't plan for was being double crossed by a member of his crew, Steve (Edward Norton). As part of his plan in double crossing Charlie and the rest of the crew, Steve kills Charlie's mentor and Stella's (Charlize Theron) father, John Bridger (Donald Sutherland), but fails to kill Charlie and the rest of the crew as he thought he did.
What follows from there is a very intelligently written and played out heist/caper movie as Charlie finds Steve once again and enlists the aid of Stella in regaining the gold that they'd stolen.
I highly recommend this movie as it is one of the better and most enjoyable movies of its type. {ssintrepid}
Special Features:
-Pedal to the Metal: The Making of "The Italian Job"
-Putting the Words on the Page for "The Italian Job"
-"The Italian Job" - Driving School
-The Mighty Minis of "The Italian Job"
-High Octane: Stunts From "The Italian Job"
-6 Deleted Scenes
-Theatrical Trailer
Read more
7 people found this helpful
Helpful
Report abuse

Julia Ann Dodson, LCSW
1.0 out of 5 stars Skip the Multi-Format disc
Reviewed in the United States on July 27, 2020
Verified Purchase
I have bought 2 copies of the Multi-Format disc of The Italian Job and both had periodic distracting snow. One was much worse than the first but both were distracting. I'm going to try again but with the Blu-ray. LOVE the movie which is why I'm trying so hard to get a decent copy!
Read more
Helpful
Report abuse

shane
5.0 out of 5 stars A true tale of revenge
Reviewed in the United States on November 24, 2019
Verified Purchase
I love this movie and it has a cover that is embossed greatly truly tale of revenge from young to old meaning Donald Sutherland to Mark Walburgh and Edward Norton they mix well also Charlize Theron they made a truly Awesome movie
Read more
One person found this helpful
Helpful
Report abuse

Glory
4.0 out of 5 stars Very good example of heist-action movie genre - OK for family movie night
Reviewed in the United States on August 5, 2018
Verified Purchase
A very good example of the modern heist-action movie genre. Very little blood. Suitable for a PG-13 family audience. Cleverly scripted with twists and turns that will surprise you up to the end. Characters are interesting but not fully developed. Leaves you wanting to know more about them.
Read more
2 people found this helpful
Helpful
Report abuse

Amazon.com
Though it bears little resemblance to the original 1969 thriller starring Michael Caine, the 2003 remake of The Italian Job stands on its own as a caper comedy that's well above average. The title's a misnomer--this time it's actually a Los Angeles job--but the action's just as exciting as it propels a breezy tale of honor and dishonor among competing thieves. Inheriting Caine's role as ace heist-planner Charlie Croker, Mark Wahlberg plays straight-man to a well-cast team of accomplices, including Mos Def, Jason Statham, and scene-stealer Seth Green in a variation of the role originally played by Noel Coward. As the daughter of Croker's ill-fated mentor (Donald Sutherland), Charlize Theron is recruited to double-cross a double-crosser (Edward Norton in oily villain mode), and once again, speedily versatile Mini Coopers play a pivotal role in director F. Gary Gray's exhilarating car-chase climax. It's perhaps the greatest product placement in movie history, and just as fun the second time around. --Jeff Shannon
Read more
One person found this helpful
Helpful
Report abuse

Mrs. Hatter
4.0 out of 5 stars Not A Remake - Just the Same Title!
Reviewed in the United Kingdom on December 9, 2018
Verified Purchase
I'm not really sure why they bothered to try and fit this into being a remake - asides from a few references here and there the story is different enough to a new film in it's own right just by changing some names etc and it would have avoided people comparing this to the original. If it must be compared, then sure the original is better. But it's a different film, and as a stand alone film it has enough action, humour and well puffed-out characters to keep you engaged through their capers to the end.
Read more
4 people found this helpful
Report abuse

AMDOG
5.0 out of 5 stars Great rebirth of the earlier version
Reviewed in the United Kingdom on June 22, 2019
Verified Purchase
Bought this because I loved the first film in 1969, which I also have. For me this was the Americans trying to recreate a British movie, however still a great film with some of the best actors.
Read more
2 people found this helpful
Report abuse

Flossie
5.0 out of 5 stars Good entertainment
Reviewed in the United Kingdom on February 1, 2014
Verified Purchase
Having seen the first famous version I was wondering what this would be like. However it would really be wrong to compare them as the storyline is different although they are some references made to the first film (gold and mini coopers!) It has a great leading cast and Mark Wharlberg gives a nice slightly understated performance alongside Charlize Theron. It starts off in Venice so straightaway I loved it! Later it moves to USA where more clever planning takes place. Lots of action with great car chases and amazing driving techniques. The minis still look cool.

DaveT
2.0 out of 5 stars Great movie but poor transfer to blu-ray (2003)
Reviewed in the United Kingdom on November 30, 2012
Verified Purchase
I love this movie but the image quality of the bluray is the worst I've seen i.e very noisy and full of artefacts. It is only watchable if you choose a low-contrast mode, which washes out the colours. You might as well stick with the DVD until they bring out a remastered version. Very disappointing but perhaps dating back to 2003 explains the poor quality of the transfer to bluray by Paramount. Sound quality (Dolby 5.1) and SD extras are good though. Perhaps surprisingly the quality of the original Italian Job blu-ray is much better... (I enjoy both movies.)
Read more
2 people found this helpful
Report abuse
See all reviews