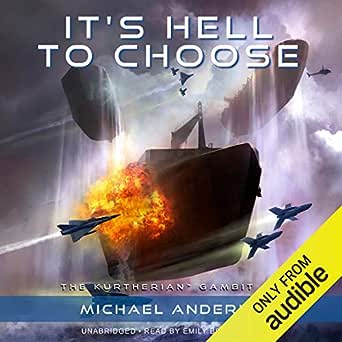 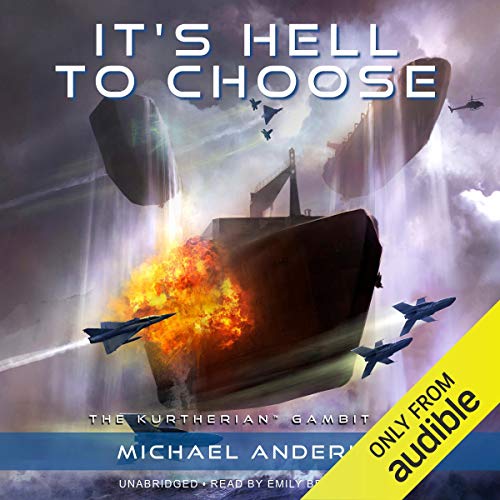 It's Hell to Choose: The Kurtherian Gambit, Book 9

4.7 out of 5 stars
4.7 out of 5
475 global ratings
How are ratings calculated?
To calculate the overall star rating and percentage breakdown by star, we don’t use a simple average. Instead, our system considers things like how recent a review is and if the reviewer bought the item on Amazon. It also analyzes reviews to verify trustworthiness.

Kindle Customer
5.0 out of 5 stars I'm inlove with Bethsny Ann
Reviewed in the United States on May 27, 2016
Verified Purchase
Actually I think I'm in love with the author ,Michael he keeps cranking them out almost fast enough for his readers like me. Honestly I don't know how he does it but gods willing he'll keep them rolling out. I don't think I have a favorite scene let's face it I read this one so fast my eyes have whiplash and for the record I have written a review(if gushing praise and no specifics can be called a review) for every book. Before this series I had written maybe 5 reviews in 50 years as an avid reader. Don't stop don't slow down keep the river rolling at flood stage please. For anyone who hasn't read these books yet. Grab death becomes her strap in and blast off for the ride of your life
Read more
5 people found this helpful
Helpful
Comment Report abuse

H. Bala
TOP 100 REVIEWER
5.0 out of 5 stars "What the hell is a bear doing in a firefight?"
Reviewed in the United States on February 16, 2017
Verified Purchase
After the lull that was WE WILL BUILD, IT'S HELL TO CHOOSE has got me picturing Michael Anderle at the typewriter by candlelight, cracking his knuckles, demonically cackling, "Oh, you thought the last one was slow? Well, take this, son, and this and this!" IT'S HELL TO CHOOSE is the second book in Anderle's Phase 2 of his Kurtherian Gambit series, and the ninth book overall. And, in this one, ish got real, son.

In WE WILL BUILD, Bethany Anne at last allowed the world at large a glimpse of the advanced tech at her dispposal. In IT'S HELL TO CHOOSE, we get the ugly repercussions to that. Because, lest we forget, while we humans can be appreciative and beamy of others' bounty, there's an ample percentage of us that are scummy enough to covet and then act upon our base envy and greed.

In diving into this author's storytelling, you may require a flow chart. He tends to skip around from plot to plot to plot, like some sort of savage. By now, his dramatis personae have expanded to ridiculous proportions. Me, I don't have a photographic memory. So, hey, Mr. Anderle, Mr. "I've a cornucopia of characters, just you wait," it wouldn't hurt to insert a glossary of characters and maybe also include in which book they first show up. If you'd already done this in future books, then that's egg on my face.

The action sequences are at their most sweeping yet as TQB Enterprises go up against their most formidable adversaries so far. Or hold up, I take that back, not the most formidable, but rather the most sizable in numbers. Hostilities have graduated from covert skirmishes to epic battles as the world watched.

There's a crap ton of fantastic characters in this series from BA herself to Michael to John Grimes and Peter and so on. Having said that, I don't feel that Anderle's character work has been all that in previous efforts in terms of depth and development. All along, he's propped up a passel of monotonal figures, and, yes, that goes for our lead heroine as well, much as I dote on her. (Except I'm really digging new character Boris.) Book 9 gratifies in that it presents a series of strong and even gut-wrenching emotional beats. In his afterword, Anderle references Snoopy's crying as he typed away. That's how much writing Book 9 got to the guy. Got to me, too.

It's not often I can quote one of Bethany Anne's creative curses, and then I remembered "scurvy looking demented llama sniffer" wasn't courtesy of her.

Kindle Customer
5.0 out of 5 stars OMG - I love this series
Reviewed in the United States on August 30, 2017
Verified Purchase
OMG - I love this series!!! Fast paced and fun with a great story line and real, down to earth characters. I absofuckinglutely love the over the top, inventive cursing. I keep waking my husband up because I'm laughing so hard while reading in bed! Growing up in the military, us kids used to collect curse words. The 1st thing we asked any new kid in the neighborhood was " what languages can you cuss in?" My brother grew up to be a linguist in the A.F. and can now cuss in 13 - 14 languages fluently. I'm still jealous.

back to the review - I found the 1st book for free on Kindle on Sunday, finished it in just a couple hours (I read very fast) and immediately bought the next 10 books. It's Weds morning and I'm starting on book 8 so I came back to get the rest of the series before I get stuck somewhere with no internet connection and I'm out of books to read :) Keep up the good work Michael - this series is on my "keep to read again" list and you're my newest favorite author (& I copy/pasted this review to all the books I've read so far) thanks for the wild ride - Karen
Read more
Helpful
Comment Report abuse

Phoenix
TOP 500 REVIEWERVINE VOICE
5.0 out of 5 stars One of The Very Few Authors I Have Ever Given 5 Stars To - And With Good Reason
Reviewed in the United States on April 12, 2017
Verified Purchase
It takes quite an author to get me to read nine books into a series. It takes an even better author to bring me to tears. Michael Anderle has had me shed a tear or two in past books, but nothing like the tears I shed near the end of this one.

Michael has created a magnificent world to escape to. His books are so detailed I feel as if I am truly there in the moment when reading. Perhaps this is because I can relate to Bethany Anne. Perhaps it is because of the fierce loyalty in his stories. Loyalty is so rare nowadays and to see it as a focal point in a series is refreshing.

I have fallen in love with the characters and can't wait to find out what happens next. The fact that the author seems to truly care about his readers is a huge plus, but it's not what makes or breaks a book for me. It's the storyline. The reading through the night because you just can't put the book down. You have to turn the page. It's coming to know and have a relationship with the characters as you read, and characters have to be well developed for that to occur.

I would be proud to have any of my daughters grow up to be like Bethany Anne in terms of her values, which is why I am also letting my teenage girls read the series despite the cussing and minor sexual content. What an amazing character.

Kudos, Mr. Anderle, on creating an amazing read (series actually) and being one of the fewer than 10 authors who have gotten a 5 star review from me.
Read more
Helpful
Comment Report abuse

Rebecca Hartman
5.0 out of 5 stars A very good read. Addictive.
Reviewed in the United States on October 15, 2019
Verified Purchase
First, the warning about the language is accurate. Normally, that would have put me off these books but the book samples were well-written enough for me to take a chance on the first book. After reading it, I got the rest of the 21-book set and I've really enjoyed it. I've also read the 10-book related Nomad set. The author does a good job of keeping a coherent story line throughout the multi-book sets and does a good job bringing in additional characters as needed to fill in the world he has created.
Read more
Helpful
Comment Report abuse
See all reviews

M. J. R. ORTON
5.0 out of 5 stars Time to play with the toys BMW built!
Reviewed in the United Kingdom on September 18, 2017
Verified Purchase
This book marks a really significant shift from the Horror theme to the Sci-Fi theme, but there is still lots of action.
Jean Dukes gets to play with her toys.
John Rodriquez brings his second set of engines on line. They were supplied by Team BMW and required considerable refitting to the ship's structure.
But be warned, the bad guys have emptied their toy box too and we know from the title of the next book that BA is going to be very unhappy with some people.

If like me you really don't like the plot twist at the end, go read up the list of other books set further down the timeline. Frankly I only made it to the end of the book because I'd recently done that.

Remember this series is running under the "Action" set of universe rules and under those rules when facing certain death you must achieve two things. First: be seen to "die" with style, the more heroic style the better, but also with just a slight hint of mystery or ambiguity. Second: someone not too far below you on the "cast list" must use words of the form "nobody could possibly have survived that!"

There is also one tangled scene which derailed me. In the scene near the beginning with the lawyers, one team are thrown out for lying. Yet I didn't notice their substitute say anything about the actual top lawyers being on the East Coast, just that they were "called away". He was not telling the whole truth, if he knew it, but he did not actually tell the lie BA accused him of. This was such a jolt to my train of thought that I mentally knocked a star off for it. However, the various stunts done with ships and shipping crates are worth six stars anyway so it nets out at five.
Read more
Report abuse

Me Richard E. Jervis
5.0 out of 5 stars These books just get better
Reviewed in the United Kingdom on May 28, 2016
Verified Purchase
All I can say is when is the next book out ???? Great series a great deal of fun from an author who is trying to entertain rather than show off, not high brow, not a great literary work, but a great story well told that will leave you wanting more! To the author thank you, now stop reading this and get on with the next book !
Read more
One person found this helpful
Report abuse

Rita Whinfield
5.0 out of 5 stars Very delayed review
Reviewed in the United Kingdom on August 28, 2019
Verified Purchase
I can't believe I didn't review this book yet. Don't want to spoil anyone's enjoyment, but this book is one massive emotional rollercoaster ride. You will, laugh, get angry, cheer and most definitely cry. Enjoy, it's awesome.
Read more
Report abuse

carol holden
5.0 out of 5 stars cant wait for next book
Reviewed in the United Kingdom on November 30, 2018
Verified Purchase
omg michael is dead im devastated. cant wait to start the next book
Read more
Report abuse
See all reviews