It's In His Kiss and millions of other books are available for Amazon Kindle. Learn more 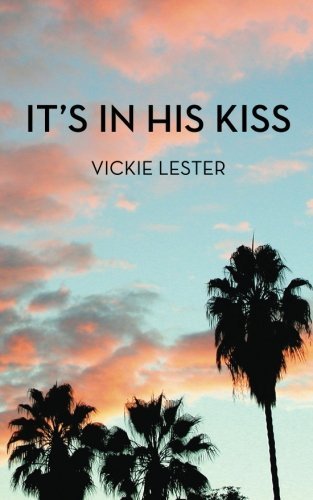 by Vickie Lester (Author)
4.7 out of 5 stars 31 ratings
See all formats and editions
Sorry, there was a problem loading this page. Try again.

It's In His Kiss is funny and smart and offers an insider's knowledge of Hollywood turned into a gripping mystery, with an ending I never saw coming... The City of Angels was named for beings most often seen by children, visionaries, and the insane. The best novels out of LA are woven with a noir tone - all that sun and all those palm trees have to cast a shadow. Anne Brown and Phillip Marlowe are very different characters, and yet I imagine the spirit of Raymond Chandler is pleased. As a fan of both authors, I know I was!

A Modern Hollywood Whodunnit: you find yourself wondering how closely some of these folks might be modelled on current A-list stars. Yet she tempers this analysis with warmth and fondness for those who view filmmaking as a craft...

She's sprinkled lots of classic Hollywood references that are like chocolate treats to old movie bloggers. Not only that, her descriptions of L.A. had us doing some online scrounging for airfare deals. The best part of all? Lester has planted an ending you will not expect. Surprise is 100% guaranteed.

Vickie Lester (lets assume that's a pen name, but hopefully acquired in a less brusque manner than Janet Gaynor's Esther Blodgett did in the classic 1937 A Star Is Born) has a way with words. That much is clear from page one...

...a yummy kind of So-Cal/Hollywood/Dishy Neo-Noir...

Her book reads like "The Jet Set" episode of Mad Men, when Don finds himself immersed in the desert, in a world of modern glass, pools and morals, peopled by lovely, languid denizens whose talents lie in false conversation and relationships.  Yes, the book is about Hollywood.

I am the author of “It’s in His Kiss”. Let’s start with a little background on how I came to write my first novel, I used to write screenplays. Horrid, arty, little things, that were praised for their characterization and literary tone, and were optioned again and again, but never made into movies. Perhaps, because they were neither commercial or cinematic? That’s a pretty good guess, if I don’t say so myself. My people came from Moscow and a London slum called Whitechapel. When the British portion of the family arrived in New York they headed out to Seattle by train, way before the plane was invented. Finding only rain, and more rain, mud, and wooden planks for sidewalks (a segment of which appeared to be an orange crate from sunny California) they immediately booked tickets south… Or, so the story goes. And thus, my father’s grandparents came to LA. Thanks for stopping by, and thanks for keeping an eye on Hollywood.
Start reading It's In His Kiss on your Kindle in under a minute.

Michael C. Smith
VINE VOICE
5.0 out of 5 stars DIRTY LITTLE SINS
Reviewed in the United States on July 29, 2015
Verified Purchase
In the movies murder is clean and easy. They never show the scum and the blood. But when it happens in tensile town it’s about a cheap and dirty as it gets. There are many sins in Hollywood, dirty little sins.

In her first novel Vickie Lester spins an L.A. Noir with more curves than Lana Turner ever had. Packed with more danger than Mulholland Drive in a blinding rainstorm, “It’s In His Kiss” is a killer of a read that peels way the glamour and myth and reveals Hollywood’s dirty little sins.

Fast paced, well written and jam packed with a cast of unforgettable Hollywood characters that are so real you can almost guess who they just might be in real life. It is a case of murder and deception that transforms the reel into real.

I took my time reading this one because it was simply so delicious. I loved the spunk and courage in the main character Anne Brown, who was born into this world of make believe and finds that love, sex and lies make a dangerous cocktail, a cocktail too many including her father and uncle know too well. Her journey to solve a very personal murder is a story of self discovery as well as a who done it. That added an unexpected layer of complexity to the story that I very much enjoyed.

Each chapter is named with a song title that ties in delightfully with the tale. That was a real treat. Great characterizations replete with juicy back stories help to propel Anne and us thought the mystery. The ending of “It’s In His Kiss” is brilliant and so surprising. Let’s just say, all my dreams came true in the end. Enough said about that. Just read it.

I am looking forward to more from Vickie Lester, a new voice from the dream factory that is Hollywood. But in the meantime I can get my Hollywood history fix from her great blog Beguiling Hollywood at WordPress.
Here’s looking at you Kid!

Luanne Castle
5.0 out of 5 stars The suspense, ambiance, and carefully drawn characterizations kept me enthralled!
Reviewed in the United States on April 22, 2015
Verified Purchase
This contemporary murder mystery is set in present-day Palm Springs and Los Angeles. I know the time period because the characters own cell phones, but the ambiance, shenanigans, and secrets come from a long-time Hollywood tradition that features real life mysteries such as the Black Dahlia murder, George Reeves (Superman), Bob Crane (Hogan’s Heroes), and maybe even Natalie Wood and Marilyn Monroe.

I was hooked very early on–in part because of the compelling story and in part because after a whirlwind romance (hook-up? you decide–I don’t want to give anything away) the reader is slammed with a shock. Lester keeps shaking the reader up as one Hollywood secret after another is divulged. She’s a master at creating believable southern California characters (main character Anne’s father Bob stepped off the page and into my kitchen), but even better at her precise and breathtaking descriptions of the city. She knows the roads, the landmarks, and how it all fits (and doesn’t fit) together better than anybody I’ve read in a long time.

Lester’s witty approach fits the subject and the culture well. I appreciated the occasional nod to pop culture. For instance, she calls a scary pseudo-religion “Clientology.” These touches give the book the feeling of a roman à clef which heightens the illusion of reality. And when it came time to reveal the mystery, I was shocked, but thrilled to discover a satisfying conclusion.

I haven't enjoyed a novel this much in a long time.
Read more
One person found this helpful
Helpful
Report abuse

Mary E. Edington
5.0 out of 5 stars If you can't get to Hollywood, Beverly Hills or ...
Reviewed in the United States on July 27, 2014
Verified Purchase
If you can't get to Hollywood, Beverly Hills or Palm Springs get It's in His Kiss! I have read mysteries for over 50 years and this is right up there with a cast of characters intertwined in old studio ways keeping the public unaware of the true lives of the stars. If you've been to any of these three areas you know that Vickie Lester has seen it from the inside out. The story unfolds in a true hard-boiled fashion but goes on to give the reader a glimpse into the lives of each of the characters and how they react to the hand they've been dealt. All in all, you fall for each of them and secretly hope they will be vindicated in the end. Playing a role in the story is the major church group that many of us know underpins many famous Hollywood elites and keeps them in submission. Intrigued yet then go get this in newest releases and I hope this is just the first of many for Vickie Lester!
Read more
4 people found this helpful
Helpful
Report abuse

H. Anderson
5.0 out of 5 stars A Stylish, Witty Mystery With a Twist at the End
Reviewed in the United States on October 26, 2015
Verified Purchase
Vickie Lester has an unmistakable style--witty and knowing--that makes her writing fun to read, and It's In His Kiss exemplifies it. The novel begins in Palm Springs as a love story but quickly becomes a murder mystery. To solve the case, the protagonist Anne Brown, a writer, must return to Los Angeles, the city she abandoned years earlier for New York; noir adventures ensue. Like Raymond Chandler, Lester knows both the physical and psychological milieux of her characters, and her insider status gives the novel extra depth. For me there was the bonus of reading about the neighborhood where I happen to live, but it's not necessary to know anything about Hollywood (either the place or the industry) to enjoy the novel. The ending should surprise and delight everyone.
Read more
Helpful
Report abuse

Carrie
4.0 out of 5 stars A fun glimpse into the world of Hollywood
Reviewed in the United States on June 6, 2014
Verified Purchase
A writer heads from New York to LA when she gets an offer to have her book made into a movie. While there, she gets caught up in a murder investigation where everything is not as it seems. Secrets are revealed, and the more Anne discovers, the more her own life is at risk. Some fun twists and turns. An enjoyable quick read.
Read more
6 people found this helpful
Helpful
Report abuse

Classic
5.0 out of 5 stars An enjoyable read!
Reviewed in the United States on June 4, 2014
Verified Purchase
I found this mystery engaging -its quirky cast of Hollywood characters well flushed-out and humorously depicted as they confide, in turn, to our unassuming heroine Anne Brown, a novelist who has flown from Manhattan to explore the unexpected possibility of an option renewal on her book. As an L.A. resident and former NY transplant like Anne, it was fun to hear her writer’s eye on the geography she navigates, from Palm Springs to the splayed out avenues and windy canyons of Los Angeles, to the capricious conceits of Hollywood culture: its nepotism, scavengers, loose morals and of course its share of glamour and romance thrown in the mix! I enjoyed where the twists and turns ultimately led me and highly recommend.
Read more
4 people found this helpful
Helpful
Report abuse
See all reviews
Back to top
Get to Know Us
Make Money with Us
Amazon Payment Products
Let Us Help You
EnglishChoose a language for shopping. United StatesChoose a country/region for shopping.
© 1996-2021, Amazon.com, Inc. or its affiliates