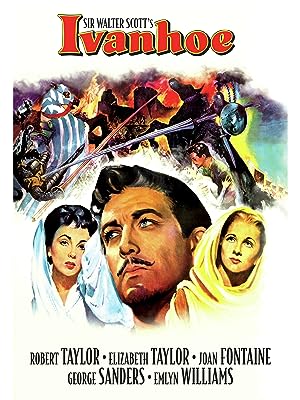 (642)6.81 h 46 min1952X-RayNR
Set in tumultuous 12th century England, Saxon knights do battle against the Norman invaders in an effort to free their kidnapped king. Starring Elizabeth Taylor, and Joan Fontaine.

Stephen HoffmanReviewed in the United States on October 16, 2016
5.0 out of 5 starsTo the battlements!
Verified purchase
As everyone knows, I am a sucker for old-school costume epics, and I'm surprised that it took me this long to find this gem. Based on the book by Sir Walter Scott (one of my personal favorites; go read it) the story focuses on Sir Wilfred of Ivanhoe (Robert Taylor) an 11th century English knight recently returned from the Crusades. An ardent supporter of Richard the Lion-heart (and disowned by his Anglo-saxon father because of it) he soon uncovers a plot to usurp the throne by a cadre of traitorous knights and led by a perpetually scowling Prince John, a.k.a. the Phony King of England (George Sanders). Complicating things more is the love triangle that ensues when, after saving her father's life (thereby becoming Ivanhoe's friend and patron) the beautiful herbalist Rebecca of York (Elizabeth Taylor) falls in love with him. Alas, the feeling is unrequited, as Ivanhoe's heart belongs only to his childhood sweetheart (and his father's ward) Princess Rowena (Joan Fontaine). The catch is that Papa Ivanhoe wants to use her to create a new Saxon royal bloodline (she's a descendant of Alfred the Great) and thusly, he wants to keep the lovebirds apart.

Without a doubt, this has to be one of the best "costume dramas" I've seen in many years. As one of the first movies to be made in widescreen, the production values are off the charts and the acting is phenomenal, particularly from Robert Taylor. Despite the fact that jousting did not yet exist in the 11th century, the jousting scenes are the highlight of the film along with a castle siege by an insurgent army led by Robin Hood himself will certainly keep you on the edge of your seat. Why this has never been given a Blu-ray realase (or a theatrical re-release) I may never know.

DLHSmithReviewed in the United States on April 26, 2010
4.0 out of 5 starsA great show - not terribly faithful to book
Verified purchase
If you are looking for a great spectacle - you'll like this. I've liked this movie since I was in high school. I first watched it because my grandmother named one of my aunts 'Rowena' and I wanted to find out who or what my aunt was named for.

Later, I read the book. This movie is not terribly faithful to the book except for the main plot. For simplicity's sake, they combined characters and attributed to Ivanhoe actions and scenes he didn't actually do in the book. But this is Hollywood of the 1950s. This is Robert Taylor at one of his best films, along with Elizabeth Taylor, George Sanders and Joan Fontaine, I still love this movie, always mentally pointing out to myself what I like best about it while I watch it. It's a great introduction to the story of Ivanhoe if you're not familiar with it. My husband wasn't, and I got him to watch it last week, pointing out to him that it was a introduction to the main story. If you want to see more "book" accuracy, check out the 1982 version. I love that one too!

There are several, what I'd call "glamour" shots of Robert Taylor in the film. Where you see that shot and you think "Wow!" And the guy was 41 years old when he did the movie. The first is in the Great Hall scene. Ivanhoe is in disguise as a Pilgrim just returned from the Holy Land. He sits at the very back of the room with a robe and hood on. The family dog barks, giving him away to his father, at the front of the hall. They cut to Ivanhoe, and he looks up hopefully, with a smile, to his father. Wow. He looks terrific.

Another hood shot is right before he throws down the gauntlet in order to save Rebecca (Elizabeth Taylor) from being burned at the stake. They show a hooded figure next to a pillar. He looks up, and as he does - there's that handsome face again. The other shots have to do with him in his knight's 'mail' part of the armor, but just shows his face. King Richard looks splendidly that way too in the last shot of so of the film.

I loved George Sanders. Hopelessly in love with Rebecca, and voraciously against Ivanhoe, you know something's gotta give here. Joan Fontaine as Rowena was too old for the part. Even with a long fall on, she doesn't look like she would be under 18, as the Lady Rowena was supposed to be. But I liked her anyway, just because.

Then, there's the beautiful, 19-year old Elizabeth Taylor, hopelessly in love with Ivanhoe, and yet, because she's a Jew and he's a Christian, at that time in history there was no way those two would ever get together.

But I would be remiss if I didn't mention Emlyn Williams as Wamba. He is the funniest guy! This jester was the comic relief to the film - much needed because it was a serious time in history, and the main plot is very serious - so there had to be something of comic relief. And Wamba's character was actually also a compilation of two characters from the book. He was terrific!

All in all, I still like the film, and I'll pull it out now and again when I want a great story - or I miss seeing Robert Taylor, Elizabeth Taylor, Joan Fontaine or George Sanders...or Emlyn Williams.

EinsatzReviewed in the United States on May 1, 2014
4.0 out of 5 stars"My heart broke long ago but it serves me still."
Verified purchase
Who knows about the historical accuracy of this film (I watched it automatically doubting its authenticity). It's a rousing tale that starts slowly then builds to a seize of a castle and a potential execution by fire. King Richard is missing for most of the story. Evil Prince John is played with a perpetual sneer by Guy Rolfe. Robin Hood (Harold Warrender) is out and about but not much is made of his attendance. Elizabeth Taylor and some jewels feature prominently in the scheme of things. Joan Fontaine isn't allowed to do more than look pretty. George Sanders (as Sir Brian De Bois-Guilbert) manages to stand out more as a villain than Robert Taylor does as the hero Sir Wilfred of Ivanhoe. There's jousting, a little mace and ax action, a disapproving daddy (Finlay Currie as Cedric), and a brief trial of witchcraft! I found it pretty exciting. Even if half the props looked to be made from papier mache.
4 people found this helpful
Report abuse

RRReviewed in the United States on August 5, 2020
5.0 out of 5 starsGood Family Movie
Verified purchase
An old story of honor and justice. The DVD was shipped from South Korea and took months to arrive, but contacting the seller assured me that it was on the way. It is in the original English but offers other Korean as well. The video and sound quality are excellent. It’s fun to watch Elizabeth Taylor as a much younger actress and Robert Taylor is perfect for the role of Ivanhoe.
2 people found this helpful
Report abuse

Henry J.Reviewed in the United States on September 1, 2020
5.0 out of 5 starsA great tale of knights and their ladies in old England.
Verified purchase
Great movie. Liz Taylor at age 19. Action scenes don't measure up to the gore typical in today's films but there were no CGI effects when this was made. The
jousting sequences were excellent given the limitations in special fx. Still it's just a really great story and holds up well almost 70 years after it was made.
Report abuse

SilverGhostReviewed in the United States on July 8, 2020
5.0 out of 5 starsGreat movie and acting
Verified purchase
A 1952 version with excellent film quality, colors and acting from Elizabeth Taylor, Robert Taylor, Joan Fontaine and George Sanders. This is one of my favorite movies and part of my collection. The story of a Knight seeking to free King Richard and put him back on the throne. A very good quality adventure film for the entire family!
Report abuse

sedonamanReviewed in the United States on July 12, 2007
5.0 out of 5 starsStill moving
Verified purchase
.
This is another one of those movies that proves your emotion can be evoked without any f-bombs, or any swearing at all.

The climax comes when, for political reasons, the Jewess Rebecca is accused of witchcraft. Sir Brian de Bois-Guilbert, the antagonist and supporter of the evil Prince John, had been making advances to her throughout the story, to no avail, because she was in love with Sir Wilfred of Ivanhoe.

To save her from burning at the stake, Ivanhoe challenges the verdict by an offer to combat the prince's champion. To play one off the other, the prince chooses Guilbert to fight Ivanhoe against Rebecca's cause, the idea being if Guilbert wins, Rebecca burns - not exactly what Guilbert had in mind.

Guilbert, however, has a proposal for her:

Guilbert: "Rebecca. I can yield now and Ivanhoe will win by default, and you will go free. I will have to live out my life in disgrace; all this I would do if you will be mine."

Rebecca: "We are all in God's hands now, Sir Knight."

Guilbert: (Angrily) "Then prepare to die - both of you!"

A tense combat follows in which Ivanhoe is almost defeated, but Guilbert is mortally wounded in a quick turn-around of events. As he lies dying, Rebecca goes to him out of sorrow, and he says to her, "Rebecca, fate had me instead of Ivanhoe love you. God be with you always." And he dies.

But then again, that's just me.
2 people found this helpful
Report abuse

Jim RobertsReviewed in the United States on June 27, 2014
4.0 out of 5 starsGood Stuff!
Verified purchase
How can you go wrong with the likes of Robert Taylor, Elizabeth Taylor, Joan Fontaine, George Sanders and a bigger than life supporting cast all in the same motion picture? These memorable characters leave the viewer with strong images of yesteryear, when knights roamed the countryside and jousted in tournament style. The story of Sir Wilfred of Ivanhoe captured my imagination as a boy and this movie served to recall those days and the images formed in mind as a youngster. The plot is rather simple, yet well acted. The action is intense at times and entertaining. The musical score is great and adds a certain flair to the overall spectacle. I recommend watching this film, especially if you enjoy those days of chivalry, when armor-clad knights went at it with axe and mace.
Report abuse
See all reviews
Back to top
Get to Know Us
Make Money with Us
Amazon Payment Products
Let Us Help You
EnglishChoose a language for shopping. United StatesChoose a country/region for shopping.
© 1996-2021, Amazon.com, Inc. or its affiliates