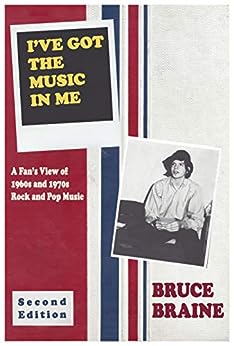 I've Got the Music in Me: Second Edition: A Fan’s View of 1960s and 1970s Rock and Pop Music Kindle Edition

pescokid
5.0 out of 5 stars A great walk down memory lane
Reviewed in the United States on July 26, 2021
Verified Purchase
If you love music from the 1960’s and 70’s, this is the book for you. It is a mostly chronological look at the music from this era, followed by “best lists” on a variety of interesting subjects. I was pleasantly surprised to be nodding in agreement with a lot of Bruce’s insights. Sure, my top 10 in 1978 would have included “Le Freak”, but hey, everyone has different musical tastes, and Bruce’s lists, while often different from mine, are still very good ones. Strongly recommended book. It’ll take you on a wonderful trip down memory lane.
Read more
Helpful
Report abuse

R Patterson
5.0 out of 5 stars Very entertaining read
Reviewed in the United States on July 15, 2021
Verified Purchase
Very interesting book!! The information is very well written and thought provoking. Used the book as a source for a couple’s Trivia night. Everyone had a great time and were quite stumped by some of the questions
Would highly recommend reading this well informed book.

King Clover
5.0 out of 5 stars Worthwhile personal take
Reviewed in the United States on January 11, 2021
There's a lot of these "personal" music books coming out the last few years in which we're told that this isn't meant to be a definitive view of whatever period Is being covered, but rather a personal take. I've read several of them but they're usually not very good. I'm not sure if it's because they have different taste than me and I just don't agree with them, or just that they're lousy. This is the first one I've actually liked and actually wanted to finish reading. Again, I'm not exactly sure why this one is better than the rest, but I just know that it is. He manages to keep an eye-level view on the music he covers, with none of the hyperbole and exaggeration and phony enthusiasm that you usually get in these books. I liked this book a great deal and I even started to reread it.
Read more
Helpful
Report abuse
See all reviews
Back to top
Get to Know Us
Make Money with Us
Amazon Payment Products
Let Us Help You
EnglishChoose a language for shopping. United StatesChoose a country/region for shopping.
© 1996-2021, Amazon.com, Inc. or its affiliates