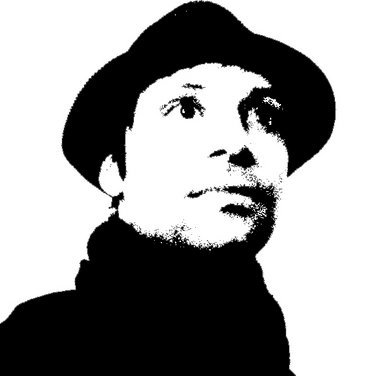 J. M. Blum was born in ’77, in a forest grove of the Pacific Northwest. Comic books and Commodores informed his childhood, along with tales of wonder from books, radio, tele, movies, and even stories spoken over rotary telephones. But games around tables co-creating meaningful stories has always been a great passion.

Blum attended Virtual High in Vancouver, BC in the ‘90s. He wrote some unpublished poetry about it. Then he hung out at an ashram and went traveling before attending the Center for Digital Imaging and Sound in the noughties to take up video game programming; which he eschewed for academic and industrial computer and data science/engineering. He wrote a PhD thesis, published papers in journals and conference proceedings, and wrote a great deal of technical content and programs. But he missed fiction.

So the prodigal son has come home with the publication of his first novel, The Forbidden Dæmon. Blum’s present home is in Belgium after living more than a decade in the UK. He’s a proud dad of three, and a happy husband too. With love for the writing process, he expects to continue producing The Entwined Spirits Saga along with many more works for years to come. You can follow along the journey by signing up to his newsletter and following his fantastical thoughts on Twitter. 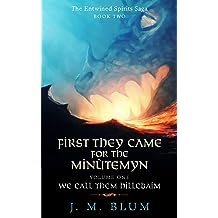 First They Came for the Minùtemyn Volume I: We Call Them Hillebaîm (The Entwined Spirits Saga Book 2) Aug 14, 2020
by J. M. Blum
( 2 )
$3.99
A story for those with the strength to fight back against those who would take all our freedoms away.

First They Came for the Minùtemyn, Part I: We Call Them Hillebaîm, graphically describes mage commando Gavríæl Kheruvím’s metaphysical and visionary journey ranging with minùtemyn guerillas behind enemy lines. Hidden from the enemy in secret caves, the narrator paints in third person limited form a magixial portrayal of the challenges of community, ideology, bravery, tragedy, and love.

This anti-fascist fantasy adventure is told from a variety of perspectives following Gavríæl and his comrades in arms. In epic style, it renders scenes of action and battle, tenderness, and humour. As the heros face sacrifice in the face of death, Gavríæl meets and falls in love with the youthful incarnation of Lîlît the dæmyn. Choices with grave consequences have to be made for the good of all.

This book is not only a tale filled with dragons and mythical creatures, but it is also a tribute to the power of prose. Feel your heart soar reading this story of hidden fae rebellion, raids and retribution, amidst a fascist slave war.

Discover the Rest of the The Entwined Spirits Saga 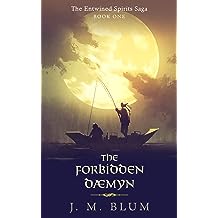 This is the tale of Lîlît Gamaliel, an elderly dæmyn forbidden from adventuring with the ærendmyn she loves until she can prove that fate has not abandoned her. To regain that companionship and her own pride, she engages in agonising struggles against fierce monsters deeper in the chaotic void than anyone has ever dared go.

J. M. Blum's enthralling debut, The Forbidden Dæmyn, is the first book in the Entwined Spirits Saga. This is a never give up book featuring the strongest female lead character known to fantasy. It is a mighty warrior's attempt at redemption in a battle with a forbidden obsession, but will it be the pride before her fall?

This fantasy series uses rich and powerful imagery. It describes the eternal struggle of love and mortality between the Trueborn ærendmyn, Gavríæl Kheruvîm, and sultry arch-demon, Lîlît Gamaliel. Each book is set in the magical fantasy world of Sefirot. These are standalone modern literary myths embedded in an overarching epic of unconscious desire, repression, and transcendence. Filled with mythical creatures, they draw from rich traditions of sacred writings, spirituality, Kabbalah, Angelology, and Demonology. Fans of fantasy, fantasy gaming, gamelit, myths, folklore, and legends will love this series for years to come.

Coming soon... The next book in the saga, First They Came for the Minùtemyn.
Read more