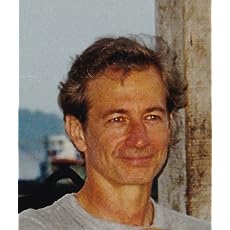 Joseph JK is a novelist and nonfiction author, who writes about individuals pushed to extremes often in exotic locales and high-stakes circumstances.
At age ten his parents sent him on a cross-country train trip wide-eyed and alone, and he's been exploring the world one way or another ever since. He built a subatomic cloud chamber in his bedroom as a child, then went on to earn a degree in physics, become a technology writer and a magazine and newspaper contributor.
He has been author or editor of dozens of scripts, training programs and guidebooks published in three languages. He set up international partnerships while working at an Internet startup company and was a speaker at Internet World Tokyo. He has taught at universities in the US and Japan.
An inveterate traveler and expatriate to countries in East Asia, Latin America, Europe and Australasia, he has ventured north of the Arctic Circle and into the southern cone of South America as well as other remote locales, capital cities and war zones. Along the way he's interviewed detectives about hundreds of homicide investigations, escaped an armed attack and kidnapping and survived a hurricane rescue at sea with smugglers (see the memoir, Three Survivors, and JosephJK.com).
His books, drawing on the people, places and situations he's encountered, witnessed and investigated, often include strong elements of suspense and intrigue.
Joseph JK's work has been compared to that of Eric Ambler, John Le Carré, Joseph Conrad, Barry Eisler and Graham Greene.
Read more 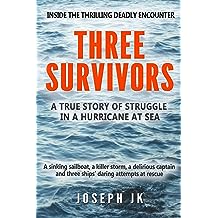 In this true story of wild seas, deceitful companions struggle for their lives in a Caribbean hurricane, with a Navy battleship, Coast Guard cutter and Norwegian freighter making daring attempts to rescue them.
Enter the blue water where growing Hurricane Danny is on a collision course with a crippled sailboat. Three people are making their way from the coast into the deepest waters of an empty sea. The flirtatious owner and her gregarious boyfriend captain have invited the landlubber author aboard for their voyage back to the States in exchange for his help as a deck hand.
When Joseph JK stepped aboard the Fair Wind one hot August day in the Mexican Caribbean, he had no way of knowing he was embarking on the adventure of a lifetime. Only as the beauty and spectacular forces of exotic tropical waters and marine life manifests around them far out at sea, does he discover that the 50-year-old sailboat is far from shipshape and that his companions are not what they seem.
Before their journey ends, the boat’s captain will become delirious, its survival gear lost to the waves, its owner in despair and all driven to the prospect of death in the center of a raging hurricane.
In its cruel fickleness the same vast sea, which has provided them the company of dolphins, feasts of lobster and mahi-mahi and penetrating clear starlit skies, will relentlessly attack them until their small boat begins to sink.
An adventure as thrilling and gripping as The Perfect Storm, but one told in firsthand detail by a participant, Three Survivors details the brutality and beauty of nature, the inherent deceit and cooperation of humans and the strengths arising from the universal will to survive.
With four maps and excerpt from official US Navy log

Praise for Three Survivors
“Tense, suspenseful.”
“Totally infuriating!!!”
“Touching and real.”
“I feel like I’m there with the noises and pitching and anxiety.”
“Wow, great ending! Magical.” 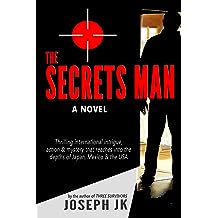 The Secrets Man: A deadly thriller of intrigue deep inside Japan, Mexico & the USA Mar 15, 2019
by Joseph JK
$2.99
Intrigue, action and mystery unfold in this thrilling globe-trotting story of conspiracy and pursuit reaching into the far corners of Japan, the US and Mexico.
For disgraced and blacklisted journalist Hack, life in the shadows is about to end. Colleagues from his past want to use his skills in a far-reaching undercover investigation that’s about to take a turn for the worse.
When unseen forces uncover their investigation, one reporter is killed and Hack becomes the target of a series of ruthless trackers. What follows is an international hunt punctuated by deception, betrayal and danger at every turn.
Crooked cops, Homeland Security, Mexican cartels and yakuza all pursue a man who has already spent seven years hiding from his past.
On the run across the US and Mexico, Hack—a man now deaf and on crutches—must make his way through a labyrinth of Good Samaritans, addled expats and seasoned killers. When he finds himself in Japan after a ravaging tsunami, a Buddhist priest sends him on the trail of a missing American girl.
As Hack teams up with a spirited and attractive interpreter-fixer, the two of them become embroiled in a trail of ever-changing clues, even as Hack himself is being tracked down. A journey across the devastation zone, a fierce typhoon, brutal kidnappings, escapes and ultimately showdowns will determine the fates of both the missing American and Hack.
The Secrets Man takes readers into an exotic world where a wrong move means death and secrets lie hidden within secrets.
Read more
Other Formats: Paperback