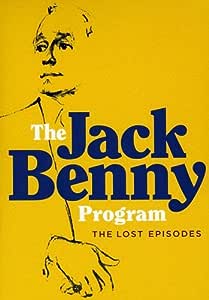 Jack Benny (Actor), Frederick De Cordova (Director) Rated:
NR
Format: DVD
4.7 out of 5 stars 135 ratings
See More
Get 3 for the price of 2. Shop items
Available at a lower price from other sellers that may not offer free Prime shipping.

The Jack Benny Program and its legendary star are counted among the most dazzling jewels in the crown of American comedy. From its beginnings as an immensely popular radio program to its heyday on television, the daily trials and tribulations of the beloved comedian kept millions of fans laughing for over 30 years. Here at last are 18 long-lost episodes, unseen since their original broadcast, that have been lovingly restored by the UCLA Film & Television Archive. Jack, Don, Mary, Eddie Rochester Anderson and a constellation of guest stars are all here in this first-of-its-kind DVD collection of The Jack Benny Program.

4.7 out of 5 stars
4.7 out of 5
135 global ratings
How are ratings calculated?
To calculate the overall star rating and percentage breakdown by star, we don’t use a simple average. Instead, our system considers things like how recent a review is and if the reviewer bought the item on Amazon. It also analyzes reviews to verify trustworthiness.
Top reviews

Kimberly M Monihan
5.0 out of 5 stars The Jack Benny Trailblazer on gathering all available episodes with a minimum of duplication (The Lost Episodes)
Reviewed in the United States on April 17, 2014
Verified Purchase
As a fan of Jack Benny, I have long sought to expand my episode collection, a deceptively complicated endeavor. Often, the same episodes will be released repeatedly on different disks. Sometimes a disk will turn up with all new material, sometimes with one or two episodes you can't get anywhere else. On other occasions, discs composed entirely of episodes you can get elsewhere for a better deal will appear. These disks frequently have no available episode guide, so telling these apart can often be hazardous. Even more confusing are customer reviews meant for one collection that have somehow ended up under another. I, the Jack Benny Trailblazer, through an extended period of careful research, mostly through purchasing the disk on a hunch and seeing what I got, am here to simplify matters. Below are live links to each Jack Benny collection which I find most advisable to purchase found here on Amazon (although you may want an episode guide, I recommend the one on Wikipedia.org):

At the time a hotly anticipated release, Shout! Factory carefully selected a number of episodes never before released on DVD along with several interesting appearances by Jack in newsreel footage and other "extra curricular" features. Among the episodes included, one of particular note is the exceptionally elusive Murder of Clayton Worthington in which Jack solves a murder with all of the suspects being played by Dick Van Dyke. For some reason, this episode never appears on any episode guide and has no entry on IMdB, meaning the only evidence of its existence is this box set. Other special episodes include George Burns, Ronald Coleman, and the much sought after Harry Truman episode. Here is found a singular collection of Jack Benny material and may there be future releases in Shout's future.

You will find reviews like this one for each of the collections listed above. May it be a useful tool to navigating the murky waters of Jack Benny DVD's. Also, be sure to watch for Jack Benny on Antenna TV.

Waialae Will
5.0 out of 5 stars This series is full of surprises
Reviewed in the United States on August 3, 2013
Verified Purchase
When I ordered this set I was expecting more of Jack Benny, Rochester, Don Wilson, Dennis Day and Mel Blanc. Well, I found those things and more. In the first episode, Jack is to play his violin at Carnegie Hall. Feeling nervous, he asks Spike Jones for advice. Well, I have heard of Spike Jones and the City Slickers, but I never expected him to show up on a Jack Benny Program. If that is not enough, there is George Burns appearing as the Devil (years before being in Oh,God), who offers Jack a chance to be the best violin player ever. So Jack goes on stage (while the Devil waits in the wings). Jack plays beautifully before the orchestra before the Devil springs his trap by changing the conductor into Spike Jones. Spike invites Freddie Morgan and Mousie Garner on stage to play their violins. Soon the orchestra is upset by their crazy antics, not keeping time with music, then fighting over who is at fault, which results in Mousie breaking his violin. He grabs Freddie's violin and then Freddie grabs a banjo, then the whole piece starts to sound country. Soon everyone in the audience is laughing at the orchestra. (At the end, Jack mentions that he really did play at Carnegie Hall and raised $50,000 to help preserve the place.)
Read more
7 people found this helpful
Helpful
Comment Report abuse

J. Prindle
4.0 out of 5 stars love j.b.!
Reviewed in the United States on August 20, 2013
Verified Purchase
i'll start by saying jack benny is the best comedian ever to me. however this video, as all videos of the great one, scrupulously avoids his best shows, which were more often than not the ones at his home. I think maybe those who choose the content of these dvd's think the most important thing in the selection of shows is the guest stars. to me however the guest stas are not really so important as benny and his regulars and the interplay between them (rockchester, dennis day, mary livingstone, and don Wilson, etc.). I wish simply that they'd come out with the entire series. I certainly would buy them whatever the cost! please! the entire series. not the hour long specials (which focused more on guest stars) just the half hour series, please! please and please again! that would be five stars! thank you!
Read more
11 people found this helpful
Helpful
Comment Report abuse

wolfster
5.0 out of 5 stars OUTSTANDING!
Reviewed in the United States on February 8, 2020
Verified Purchase
The quality is as good as possible considering the original source material was Benny's kinescopes. The episodes are delightful! Highest recommendation to any Benny fan. I found the episode with President Harry S. Truman at his library to be especially interesting as it was never released in syndication. Benny can walk onto a stage and not say a word and I fall on the floor laughing...
Read more
Helpful
Comment Report abuse

Abel Magwich
5.0 out of 5 stars Lots of unseen Jack Benny here!
Reviewed in the United States on August 9, 2013
Verified Purchase
Although I had seen a couple of these episodes somewhere, most of this material has never been shown on television since its original airing. The Gary Cooper episode is classic, with the Coop exhibiting his 'singing' talents by warbling the Everly Brothers' 'Bird Dog'. In another classic bit, Jack's sponsors actually play back all of Benny's straight lines, illustrating to Benny just how unfunny he is. Only Benny could get away with this schtick.
Bonus features are nice, too, with snippets from Jack's many television specials. Now what CBS really needs to do is restore the entire 'Jack Benny Program' series. Benny was truly an original comedian, as funny on television as he had been for decades on radio. His ensemble cast, including Mel Blanc and Frank Nelson are well represented here, too.
Read more
9 people found this helpful
Helpful
Comment Report abuse

Gary R. Gordon
5.0 out of 5 stars Priceless history, lots of stars
Reviewed in the United States on July 25, 2013
Verified Purchase
I'll be brief. It's the material, not the video quality that makes this set essential. It's not perfect video because most of it never was, but there aren't the usual scratches, splices and missing music and credits typical of those public domain sets. This is a great set, packaged in order of airing, include most of the original commercials and the live TV banter. I especially liked the episode with President Truman and all of the political and pop culture references of the day. Stars pop up everywhere even when they aren't billed. Plenty of George Burns, Rochester, Dennis Day, Robert Wagner, Natalie Wood. Great Stuff. Don't hesitate because of the videophiles who poo poo the video.
Read more
4 people found this helpful
Helpful
Comment Report abuse
See all reviews

Kerry R.J. Tattersall
5.0 out of 5 stars Benny is always good
Reviewed in the United Kingdom on May 17, 2014
Verified Purchase
As a great fan of Jack Benny since my early teens, I was delighted to get this set of three discs with so-called "lost episodes". Certainly most of them have been completely new to me. The quality is good, if you remember the quality of American b/w TV that era.
Benny is as always great and so are his regulars (like Dennis Day and Rochester) as well as his guest stars, who manage to break him up on several occasions (an easy task with Benny's acute sense of the ridiculous). This is a must for all Jack Benny fans.
Read more
One person found this helpful
Report abuse

Michael Pointon
5.0 out of 5 stars A long-awaited rare gem
Reviewed in the United Kingdom on October 14, 2013
Verified Purchase
Excellent! This is a release to be commended and I hope it leads to more such reissues of classics-SOON!
The International Jack Benny Fan Club should be proud.
Michael Pointon
Read more
Report abuse

E. A. S.
5.0 out of 5 stars Forever 39
Reviewed in Canada on March 18, 2014
Verified Purchase
Jack Benny is great and I enjoy his wit. Watching these DVDs you can understand why he was on radio and tv for so long. Thank you Shout Factory
Read more
2 people found this helpful
Report abuse

Page 1 of 1 Start overPage 1 of 1
This shopping feature will continue to load items when the Enter key is pressed. In order to navigate out of this carousel please use your heading shortcut key to navigate to the next or previous heading.
Back
Next
Pages with related products. See and discover other items: lost tv show, the jack benny program