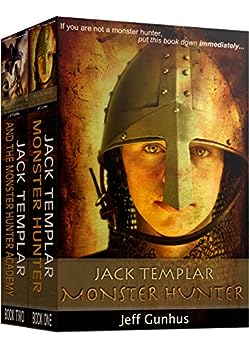 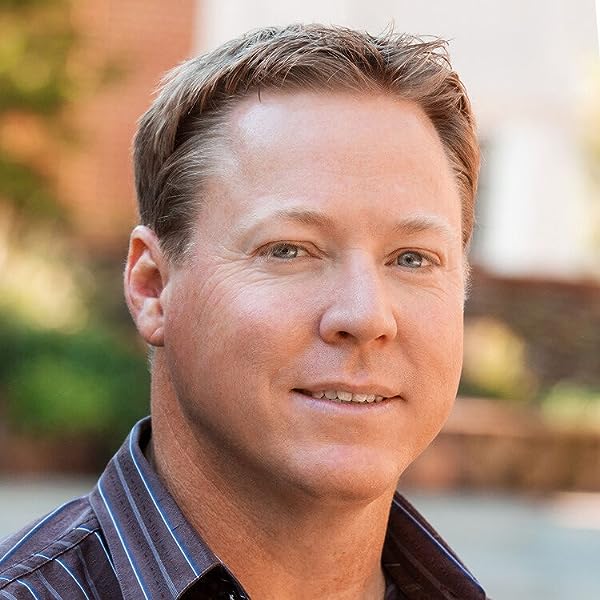 by Jeff Gunhus (Author) Format: Kindle Edition
See all formats and editions
Sorry, there was a problem loading this page. Try again.
Note: This Special Edition Box Set contains Books 1 & 2 and an extended excerpt of book 3.

JACK TEMPLAR MONSTER HUNTER: The day before his fourteenth birthday, Jack's life as a regular kid surviving Sunnyvale Middle School changes forever when he discovers he comes from a long line of monster hunters. Not only that, but if the monsters of the world could kill any single human, he would be on the top of their list. With the help of his friends Will and T-Rex, Jack must join forces with a mysterious monster hunter named Eva and escape Sunnyvale before Ren Lucre himself, the Lord of the Creach, finds him. Jack Templar might be a monster hunter...but he's also the hunted.

JACK TEMPLAR AND THE MONSTER HUNTER ACADEMY: Jack, Will, T-Rex and Eva embark on an incredible journey across the Atlantic to join the Monster Hunter Academy. Pursued by the Creach at every turn, the gang battles their way to a secret mountain hideout where young monster hunters are trained for a lifetime fighting monsters. Master Aquinas, the ancient teacher who leads the Academy, assures Jack that she will answer the questions he has about his parents and about the prophecy that surrounds him, but only if he first trains to become a full hunter. Jack does train, but it's not too long before Ren Lucre finds their hideout and Jack is put to the test. Their only hope of survival is for Jack to complete a quest in the Caves of Trial and recover the Templar Ring. At stake is not just Jack's life, but the lives of his friends and the hundreds of young hunters at the Academy...and quite possibly the world.

JACK TEMPLAR AND THE LORD OF THE VAMPIRES: Jack Templar and his friends seek the first Jerusalem Stone, traveling to Morocco and under the streets of Paris to find and confront the Lord of the Vampires. But the old vampire has a few secrets of her own and Jack's world with never be the same. EXTENDED EXCERPT
Read more
Previous page
Next page

JACK TEMPLAR MONSTER HUNTER (BOOK 1)
Nonstop action meets surprises galore as Jack's true nature and abilities assert themselves against overwhelming odds." - Publishers Weekly
"Gunhus brings young readers a monster-filled romp to read at their own risk. In the first few pages, Jack, the storyteller and main character, warns readers not to read about these real-world monsters that would seem to only exist in fiction. The tone is set--sarcastic, tongue-in-cheek and likable; rooting for Jack is easy...Gunhus masterfully introduces fully realized characters with whom readers can connect almost instantly. The pacing is quick but not rushed, and events seamlessly progress, complete with action, cliff-hangers and surprise reveals. " - Kirkus Reviews
"The action starts right from the first chapter and doesn't let up until the book ends. This is the first book in a series, and I look forward to reading the rest of them." -The DMS
"Jeff Gunhus has made a terrific fast paced fantasy. I even wanted to bolt my doors and lock my windows! Five stars for the best book of the year." -Elizabeth A. Bolt
"Everything in this book was something a reader could love - action, adventure, mythical creatures, mystery and even a touch of romance. Not bad for fourteen-year-old Jack Templar. There were so many messages to take from this book - messages of love, self-sacrifice, faith and and having the belief that you can be so much more than you are if you just believed. The words poured from the page and I just couldn't help lapping them up." -Sandy @ Magical Manuscripts
"This was fun read with non-stop adventure. Reminiscent of Percy Jackson and Harry Potter...very good pace, lots of fun and a solid start. Already anticipating the next story!" -M. Profant
JACK TEMPLAR AND THE MONSTER HUNTER ACADEMY (BOOK 2)
"Jeff Gunhus has crafted another winner in the sequel to Jack Templar: Monster Hunter. Jack Templar and the Monster Hunter Academy brings back our young hero, Jack Templar in another captivating story filled with plot twists and turns." - Mother Daughter Books Reviews
"I love these Jack Templar books. They're like a grittier, darker Percy Jackson." - Amanda Northrup
"I could not stop reading! Full of action and adventure. I can't wait till the next book! Do your duty, come what may!" - Calvin Kaul
"I enjoyed this book even more than the first book...this was a read that I couldn't put down the moment I picked the book up." - Brandon
"I enjoyed reading this book even more than the first one...A couple of places I actually teared up during a rousing and emotional episode. I am looking forward to the next installment, that's for sure!" - L. Jenkins
"I have never felt the need to rate a book before. This book is spellbinding. As I turned the last page at 3:30am I knew I had to tell someone I could not put it down! Please hurry and finish the rest of the series." - Charlotte Edwards

Welcome to the world of Jack Templar Monster Hunter. I hope you enjoy this special 2-book edition and that you see the journey through with all six of books in the series. The series is a wild romp around the world (and the underworld) and I've done my best to make it as entertaining as possible for readers of all ages.

I wrote this series as a way to get my Jack, an eleven-year-old reluctant reader when this all started, interested in reading. He was smart as a whip, but just didn't enjoy reading. We decided to form the Early Morning Book Club and read an hour together before school. I figured a story with him as the main character (and his younger brother, Will, as his sidekick) would help keep his interest. The fact that he was fighting monsters with swords was even better. Soon brother Will joined the club and it wasn't long before they were reading faster than I could write. The whole thing worked great. Jack and Will turned out to be voracious readers and a new series was born.

While I was happy to discover middle school students loved the books, I was surprised and excited to have so many adult readers become fans. In retrospect, it makes sense as the Harry Potter phenomenon showed adults that reading in this genre can be fun and rewarding no matter your age. And, just as the Harry Potter series grew darker over time, so to did the Jack Templar books as the stakes got higher and some characters were called on to sacrifice for the greater good. I like the idea of this two-book set because it shows the beginning of that transformation. If parts of book one feel a little "young" for you, I hope you'll soldier on. Things get real in a hurry in book two.

Since writing Jack Templar Monster Hunter, it's been a finalist for the Foreword Reviews Book of the Year Award, a Parent's Choice recommended book, highlighted on hundreds of websites and translated into two other languages. I have also published five novels for adults in both horror and crime genres, all of them Amazon category bestsellers and some of them reaching into the top 100 of all books on Amazon.

However, it's Jack who has my heart. I hope that once you meet him, you'll feel the same way.

Jeff Gunhus is the USA TODAY bestselling author of thriller and horror novels for adults and the middle grade/YA series, The Templar Chronicles. The first book, Jack Templar Monster Hunter, was written in an effort to get his reluctant reader eleven-year-old son excited about reading. It worked and a new series was born. His books for adults have reached the Top 30 on Amazon, have been recognized as Foreword Reviews Book of the Year Finalists, Kirkus Top 100 Indie Books and reached the USA TODAY bestseller list.

After his experience with his son, he is passionate about helping parents reach young reluctant readers and is active in child literacy issues. As a father of five, he leads an active life in Maryland with his wife Nicole by trying to constantly keep up with their kids. In rare moments of quiet, he can be found in the back of Old Fox Books in Annapolis working on his next novel or on JeffGunhus.com.

4.0 out of 5 stars
4 out of 5
6 global ratings
How customer reviews and ratings work

Kindle Customer
4.0 out of 5 stars Four Stars
Reviewed in the United States 🇺🇸 on June 5, 2016
Enjoyed this book. I am on the 3rd book now.
Read more
Helpful
Report abuse

Boz Dijango
5.0 out of 5 stars I'm impressed
Reviewed in the United States 🇺🇸 on January 28, 2019
Verified Purchase
I didn't expect to be, but I am. The first book is just an intro, by the end of the second book, if you aren't hooked, well, there's something wrong with your taste in fantasy books. This is targeted as YA in the first part of the first book, but becomes an all-ager quickly. I can highly recommend these two books.
Read more
Helpful
Report abuse

booklover
5.0 out of 5 stars Fantastic series!
Reviewed in the United States 🇺🇸 on March 12, 2016
Verified Purchase
Jeff Gunhus is a master storyteller. The Jack Templar series is every bit as good as I'd hoped. Jeff Gunhus weaves truth and fiction in a way that makes it all believable...makes you believe there could be monsters out there. I'm looking forward to the next in the series. "Do your duty...come what may!"
Read more
Helpful
Report abuse

D Caldwell
5.0 out of 5 stars This book can make you kid love reading
Reviewed in the United States 🇺🇸 on July 23, 2016
Verified Purchase
my 12 year old son hates summer reading. i read the first few pages out loud and he was hooked. he stayed up and snuck the Kindle into his room to read all night. NEVER did such a thing before
Read more
One person found this helpful
Helpful
Report abuse