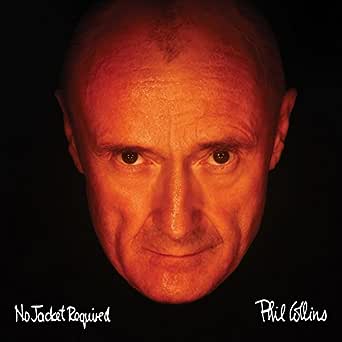 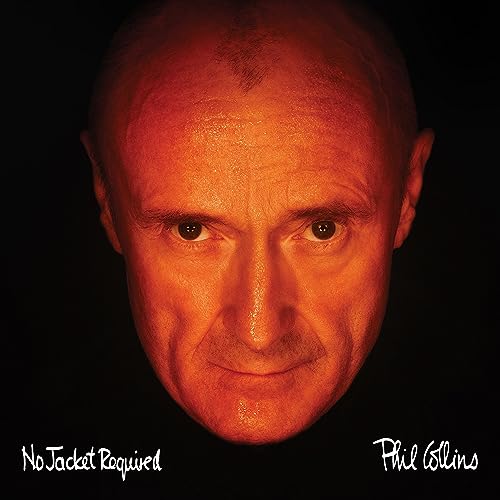 Listen Now
Buy MP3 Album $13.49
Your Amazon Music account is currently associated with a different marketplace. To enjoy Prime Music, go to Your Music Library and transfer your account to Amazon.com (US).

4.7 out of 5 stars
4.7 out of 5
822 global ratings
How are ratings calculated?
To calculate the overall star rating and percentage breakdown by star, we don’t use a simple average. Instead, our system considers things like how recent a review is and if the reviewer bought the item on Amazon. It also analyzes reviews to verify trustworthiness.

Zach C.
5.0 out of 5 stars Deluxe Edition Review
Reviewed in the United States on April 17, 2016
Verified Purchase
I'm a die hard fan of Phil & have been since the early 80's. He always does quality work & everyone of his albums have something to offer. But this 3rd album is, without a doubt, one of the best of the 80's if not all time & there was no bigger artist than Collins back in 1985. He even won a Grammy for Album of the Year & four of the singles were top ten hits on the Billboard Hot 100. "Sussudio" & "One More Night" also reached #1 and were all over the radio. But this album is more than just a few hits. Although there is alot of synth (it was the 80's after all), the rest of the album is very solid & contains lots of high energy songs with great synth, percussion and guitar. There are also a few nice ballads. One of my fav deep cuts - "Long Long Way To Go, which isn't romantic in nature but is actually a political song, has a haunting & melancholy feel to it. It also features Asian styled keyboards & Sting on b/g vocals. Awesome track & would've made a great single. Sting would also sing b/g along with another pal & former bandmate of Phil's - Peter Gabriel on the popular & likable hit "Take me Home".

Ok, as far as this deluxe edition goes...

The original 1985 disc already sounded really good so there was only so much they could do to improve the sound. But the remastering is definitely noticable in a good way if you listen to music on an iPod or in the car. Doesn't sound compressed to my ears or like there is anything missing. Just somewhat louder & fuller overall with more bass & good fidelity. Also, a music site analyzed all the tracks on Phil's reissues & were quoted as saying "The dynamics remain nearly unchanged". I agree with that statement.

Most of the bonus material on the 2nd disc are live tracks of the album's songs. There's no info about them in the liner notes but they sound like they were taken from his concert videos which are a combination of performances from his 1985 NJR tour in Dallas, 1990 "But Seriously" tour in Berlin & his Farewell tour in 2004. I was fortunate enuff to attend concerts during the last two. "Sussudio" also sounds just like his performance from the Knebworth concert in England back in 1990, which I always felt was one of his most exciting & best performances. Some other highlights are live versions of "Only You Know And I Know" which has an extended re-mix sound to it but sounds very faithful to the original (I really dug it) & "Long Long Way To Go" which has kind of an Unplugged sound to it. Phil & his band do these versions alot of justice & Phil's voice also sounded great.

The rest of the bonus material are demo's for "Only You Know And I Know", "One More Night" & "Take Me Home". They sound very similar to the originals but slightly rougher and you could tell that Phil hadn't finished the lyrics yet cuz he only sang the choruses with actual words. For the rest, he just kinda makes sounds that sound like words but aren't. Almost sounds like he's singing in a foreign language which is very interesting.

Anyway, this is a welcome re-issue & even though there is not alot of rare stuff on this release, I still feel it's worth buying if you want better sound quality or to hear excellent live versions of this album's songs.
Read more
38 people found this helpful
Helpful
Report abuse

MARK A MAINARDI
5.0 out of 5 stars Phil Collins WAS the 80s...End of story
Reviewed in the United States on August 30, 2017
Verified Purchase
Love him or hate him one thing can be sure... Phil Collins was the 80s. Phil Collins was the 80s and "No Jacket Required" was a culmination of everything that was good about that eras pop-music. Everybody and I mean everybody, has at least one or two favorite Phil Collins songs. His music was something that Fathers and Sons were listening to as well as die-hard vintage Rock Fans (please see Genesis) and THIS album is full of the energy and a dynamic spirit, that was completely designed by a man who had earned that right (and Artistry level) after years and years of hard work. Phil Collins was everywhere and he was doing everything right at the right time. Sometimes even in two different time zones, on the same day. His songs were hits, his videos were hits, his band (both of them) were great and selling out shows worldwide for a decade!...I don't know about England and I don't know about the controversies and honestly I don't care. (Americans can be a little more forgiving that way) Even after reading his book, I can tell you that Phil Collins no matter who people think he IS or even who HE thinks he is: is still a man that makes and made great music and the 80s were better for him because of that. PERIOD. End of story. Everything he touched and pretty much everybody that he worked with, turned to platinum, silver or gold. Sometimes even his songs were better than the movies that they were associated with. And sometimes he was actually IN the movie himself. Phil Collins gets a bad rap because he may have been "Overexposed" but that's only because we wanted more of him and we kept buying his records and listening to his music and there is absolutely nothing wrong with that. Call him a "sell-out" or "smarmy" but you can not deny that this man worked his ass off in the 80s and EVERYONE was the better for it. (Phillip Bailey, Robert Plant, Adam Ant, Stephan Bishop, Eric Clapton, Miami Vice and Genesis) Genesis FINALLY received their FIRST Number One Album/Song due to Phil taking over for Peter Gabriel. Most bands NEVER survive a lead singer change...But they did and that was all due to Collin's ability to write for the masses and "No Jacket Required" is the apex of this ability! ....This album is an incredible representation of every single artist at their best and should NOT be looked over.
Read more
7 people found this helpful
Helpful
Report abuse

Tom
4.0 out of 5 stars Great Remaster!
Reviewed in the United States on July 29, 2017
Verified Purchase
I was a bit suspicious of this remaster based on the previous Genesis remasters sounding good and bad. Much debate has been raging on those remasters ever since! However, being a huge fan of this album I decided to give it a go and see if I noticed a difference.

The Music: After listening to the original release a zillion times I'm very familiar with all of the nuances. My first impression was the music sounding brighter ... a bit more treble. While this is very typical of "remasters" it didn't sound over done. Next was the overall stereo sound. There's more space in the mix to hear all the music more clearly.

The Extras: While it's nice to have the live versions of most of the songs and the demos ... it doesn't really add much. I would have preferred a remastered concert recording perhaps from his live Dallas show. Any rarities like "I Like the Way" and the remix of "We Said Hello Goodbye." Also the extended remixes.

Overall: If you're an audiophile then this is a must purchase. It definitely sounds "better" than the original. Although I would say the original sounds thicker. Both versions are outstanding. I salivate at the thought of a 5.1 surround sound release on blu-ray. Also a complete set-list concert release of his Dallas show on blu-ray would be tremendous!
Read more
One person found this helpful
Helpful
Report abuse
See all reviews

David Matthews
5.0 out of 5 stars Brilliant Album but Age doesn't Improve the Cover!
Reviewed in the United Kingdom on October 24, 2020
Verified Purchase
I love this album, always have; it was my favourite album that Collins ever released. Over time, my musical tastes have changed and I haven't listened to Phil as much as I used to. When I saw another remaster, my first thought was that he was trying to top up his pension fund.

It was going to take something really special to get me to part with my hard earned money again for something I already had (multiple times). Well album arrived; placed the lovely thick heavy weight Orange vinyl on the turntable and sat back and was transported to the Mid 80's. Unlike many other remasters which are just loud, this album has been done with care. The sound was crisp and clear and actually better than the original (or CD version to be honest).

Top quality sound, great coloured orange vinyl, carefully remastered; worth every penny. The album cover was never his best, but age and alcohol have not improved his appearance and perhaps it might have been kinder to reproduce the original album cover.
Read more
Report abuse

Mr M H Davis
5.0 out of 5 stars Phil’s best album on vinyl sounds amazing
Reviewed in the United Kingdom on January 14, 2020
Verified Purchase
I’ve been listening to this album for years but never had it on vinyl before, so seeing it reissued on 180g I decided it was time.
This is for me Phil’s best album and on this remaster it sounds amazing.
I won’t go track for track because you all know the music, just buy it, vinyl is the way to listen to great album.
Read more
2 people found this helpful
Report abuse

Lewis Perry
5.0 out of 5 stars Going out in style Humour. Collins Best Solo Album.
Reviewed in the United Kingdom on August 15, 2017
Verified Purchase
By Far Phil Collins Best Solo Album, I would highly recommend this for any Collins Fan. the New cover is awesome showing that Phil Doesn't care about taking the mic out of himself. Going out in style humour. I have all Phil Albums on every platform Digital download, CD, and Vinyl. I would highly recommend you get the remasters on vinyl the sound quality as it always has been with vinyl is awesome and so clear.
Read more
2 people found this helpful
Report abuse

Mr. D. J. Tombs
5.0 out of 5 stars Orange Vinyl Version - The Wow factor! 100%
Reviewed in the United Kingdom on October 9, 2020
Verified Purchase
So so happy to have this orange coloured vinyl version of this brilliant album.

It is a thing of pure beauty!

All Fans of our Phil simply must have it!

S. Green
4.0 out of 5 stars No Jacket Rq vinyl
Reviewed in the United Kingdom on November 22, 2020
Verified Purchase
Firstly its a good album, but not as good as the first two, you can hear its recorded in the digital age where PC used drum machines..
Colour of the vinyl is great.
Read more
Report abuse
See all reviews