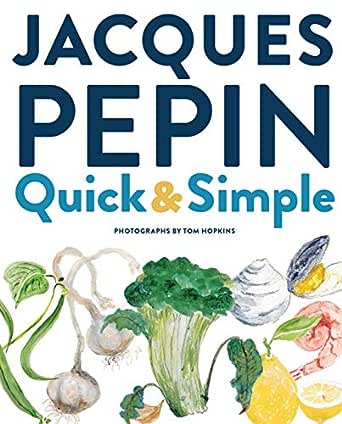 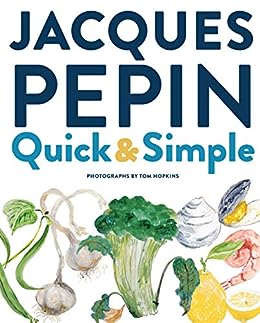 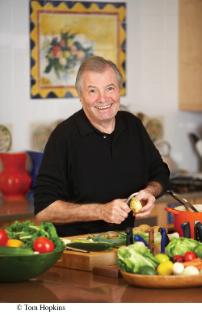 This tasty dessert can be made with fresh berries or IQF (Individually Quick Frozen) berries. I always have a few packages of frozen unsweetened berries in my freezer. Serve the gratin warm, with crème fraîche or sour cream.

Preheat the oven to 375 degrees. Place the berries in a 5-cup gratin dish.

Place the pastry pieces in a bowl. Add the melted butter and brown sugar and mix well. Sprinkle on top of the berries.

Bake for about 25 minutes, until the gratin is nicely browned on top. Serve warm, with crème fraîche.

Keep a supply of IQF (Individually Quick Frozen) berries in your freezer for use in fruit desserts.

"Inexperienced home cooks and those in a hurry to put dinner on the table will appreciate this friendly, accessible collection."
—Publishers Weekly

“A comprehensive collection of everyday recipes that will encourage anyone who is short on time, but still interested in cooking fabulous food at home.”
—Library Journal, starred review

"You might just learn a few breezy techniques for weeknight French-style dining with this new one from Pépin."
—Epicurious --This text refers to the hardcover edition.

The winner of sixteen James Beard Awards and author of twenty-nine cookbooks, including A Grandfather’s Lessons, Jacques Pépin Heart & Soul in the Kitchen, and Essential Pépin, JACQUES PÉPIN has starred in twelve acclaimed PBS cooking series. He was awarded France’s highest distinction, the Legion of Honor.

4.7 out of 5 stars
4.7 out of 5
194 global ratings
How are ratings calculated?
To calculate the overall star rating and percentage breakdown by star, we don’t use a simple average. Instead, our system considers things like how recent a review is and if the reviewer bought the item on Amazon. It also analyzes reviews to verify trustworthiness.

A. S. Hale
5.0 out of 5 stars A re-write of an earlier title, but still worth it!
Reviewed in the United States on October 9, 2020
Verified Purchase
I am a long time follower of Jacques Pepin--a pre-internet fan. This book is a remake of an earlier book by Jacques, "The Short Cut Cook" from 1990. The new book is about a hundred pages longer, and does have some new recipes, and much better presentation and "feel". I am glad I bought it. If you are wondering what's inside, or if you should replace your old copy, here is what you might find useful to know:

The Good:
(1) The Physical Book is Better. Specifically, the paper is better quality--coated and perfectly cut, not a deckled long edge like the hardback I have of the previous title. The coated paper (what they use to print colored inks) should not yellow as quickly as the older version has.
(2) The format of the book is better. Specifically, each recipe begins on a new page, the ingredients have been placed on the outside edge of each page and identified in a different color--a deeper blue ink, not a hard-to-read-when-the-flour-is-flying pale color (THANK you Editors!). These things make using the book in the kitchen a little easier. The old title did identify the recipe in different typeface (italic), but often you had to flip back and forth between ingredients and instructions when the recipe started mid=way in a page and continued on the the next page. That is far less frequent in the new book.
(3) There are photographs and colored artwork--not every page, not every recipe, but some folks feel they "need" the photos for inspiration and they are there. The old book was entirely black ink, and only had few tiny bits of art drawings.
(4) The grouping of recipes is more selective (more chapters). I compared three chapters in the new book to the old, (the chapters are broken up differently in the new book and some recopies have been reclassified (e.g. cheese tart went from the appetizer chapter to a bread chapter, etcetera).
(5) Each chapter lists the recipes. The old title only had the index.
(6) There are new recipes. In my chapter compare of the fish & seafood, I found a dozen new recipes and 2 recipes that were dropped from the new edition. I checked 2 other chapters, (appetizers and soups) and found just 3 new recipes, and 2 drops (example: a consume soup was dropped, though a different consume based soup was among those added).

The "Bad" (honestly, in this case, I would say unfortunate, not actually bad):
(1) Some recipes dropped (like a broiled snapper and a Herring Lyonnaise). Looking at what dropped vs what added, this may reflect changes in availability/sustainability, and/or simple changes in taste (new fish available, a different red snapper treatment was added).
(2) Chapter introductions were dropped--but each recipe still maintained it's own introduction.

The Different--neither good nor bad, just a change:
(1) Much of the text is unaltered, save in some very subtle ways-- a phrase moved, sentences arranged into different paragraphs. The most significant case i found, a clam recipe cleaning the beards is now done in the first instruction, whereas before it was done after boiling. Other changes are VERY minor.
(2) Some recipes have changed ingredients: Example: The cheese tart originally used allspice and tabasco--the new suggests either a salsa (recipe provided) or a bottled siracha sauce. Not bad, just different.
(3) The new book is substantially longer: 283(last numbered page) vs 376(last printed page)--this does NOT reflect a huge number of new entries (but there are several), but rather other factors: Each recipe starting on a new page; The introduction of photographs (lots of them full page); Full page artworks of Jacques; and now each chapter lists the recipes contained therein.
Read more
79 people found this helpful
Helpful
Comment Report abuse

Coco
5.0 out of 5 stars Just Lovely, Simple, Meals
Reviewed in the United States on October 6, 2020
Verified Purchase
The cover of my copy was a bit dirty and the corners a bit the worse for the trip. But that bothers me very little because although I have only thumbed through about half of book a few things are quite evident.
1. Jaques pépin is a National treasure
2. I opened this book like it was Xmas morning
3. As an experienced home cook this book is like a love letter to by everyday. Elevating semi homemade to quick slices of foodie heaven
4. I’m very excited to get my bookplate
5. If you grew up on Jaques and Julia just get this book.
Read more

Siberianpeachpie
1.0 out of 5 stars Warped Book - Cannot Give As Gift *Updated
Reviewed in the United States on October 6, 2020
Verified Purchase
I can't believe the lack of quality of this book. It is a gift and I can't give something like this. It never closes. It is warped internally, the back cover seems flat until you open it and it sort of crackles when it opens. You can open it to any part of the book and the pages stand apart from the rest.

I'm very disappointed, as this book is for the same person I bought a book for last year and found duplicate pages, printing ink smears, etc and had to return it.

I know we have gone digital, but some of us also truly enjoy and love real books in your hand, the beauty and workmanship and the smell of a real book. It's sad.

This one looked like a cheap knock off, but it's not. It is a publishing house I respect. What is going on?

Update: Replacement was sent and is ~40% better. It’s disappointing as is so important to me. Seems to be a manufacturer’s problem. Thank you Amazon for always trying to make things right.

Note to Chef: Thank you! I have your new book, also sending one to my son. We are going to discover new, wonderful quick and scrumptious meals together (remotely) with you as our guest and teacher! Thank you so much for all you do, and who you are! You have impacted three generations in our family so far, as my mother loved your cooking, too. And more to follow! You are a beloved part of the family, Chef, and most appreciated. 💙
Read more

CMS
5.0 out of 5 stars Great for beginners.
Reviewed in the United States on October 6, 2020
Verified Purchase
I received this cookbook today and not disappointed. Great dishes with few ingredients in many of them. I’m looking forward to cooking all of them. I watch Jacques on his Facebook page cooking these simple meals. I look forward to it everyday and as an intermediate cook, I learn so much. This is a great book for beginner cooks.
Read more

Sean
5.0 out of 5 stars Absolutely the BEST Jacques PEPIN cookbook!
Reviewed in the United States on October 12, 2020
Verified Purchase
My favorite Jacques Pepin cookbook. Ingredients that you normally have on hand, with simple instructions and preparations with OUTSTANDING RESULTS. The potato omelet fantastic! The Potato and Leek soup was so easy and DELICIOUS! And finally, the artwork is unbelievable! GREAT... GREAT... GREAT...
Read more
13 people found this helpful
Helpful
Comment Report abuse

Natasha Hazelwood
5.0 out of 5 stars Such fun!
Reviewed in the United States on October 11, 2020
Verified Purchase
The simplicity of this book is fantastic--no pretentious, fussy recipes, here! Each recipe has a quick little narrative that you'll find yourself reading in Jacques' signature accent, and the instructions are clear and concise...
such fun!
Read more
9 people found this helpful
Helpful
Comment Report abuse

bunnysaver
2.0 out of 5 stars Definitely not his best work
Reviewed in the United States on October 14, 2020
Verified Purchase
Pretty derivative of previous books. Most of the recipes made me ask "why cook/serve that?!" Many of his "must have" canned products surprised me. Oysters? Mussels? Herring? Buttom mushrooms?! Nah. And the food photos look very "bright," like those from 1970s cooking magazines. Surprised and sorely disapponted. Am returning it, and the copy I bought for a friend who needs to get meals on the table in a hurry. If you need to cook things quickly, try one or both of his "Fast Food" books, instead.
Read more
6 people found this helpful
Helpful
Comment Report abuse