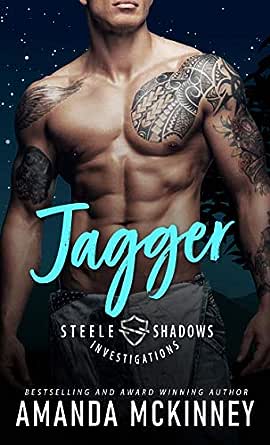 You've subscribed to Steele Shadows Investigations! We will preorder your items within 24 hours of when they become available. When new books are released, we'll charge your default payment method for the lowest price available during the pre-order period.
Update your device or payment method, cancel individual pre-orders or your subscription at
Your Memberships & Subscriptions
There was an error. We were unable to process your subscription due to an error. Please refresh and try again. 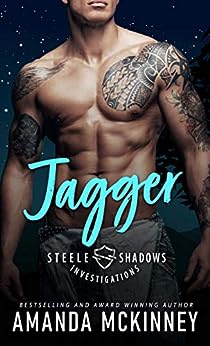 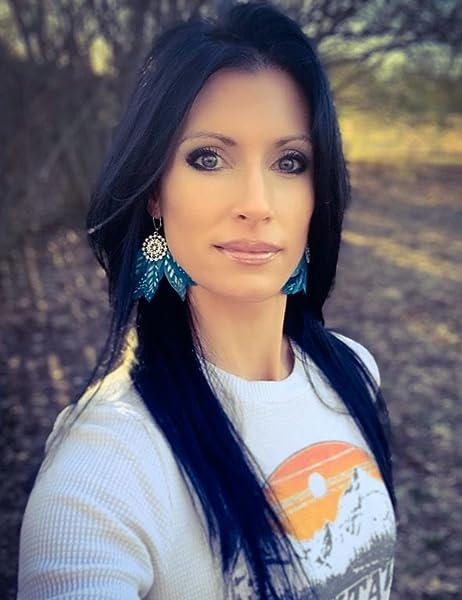 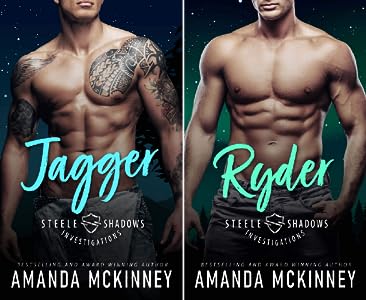 "My mind is BLOWN." -Book Blogger, Books and Beauty by Cassie

"My mouth literally hung open when I finished this book. You do not want to miss this one." - ★★★★★ NetGalley Review


Praise for the Berry Springs Series:

"One of my favorite novels of 2018." -Confessions of an Avid Reader, The Fog

"The Woods is a sexy, small-town murder mystery that's guaranteed to resonate with fans of Nora Roberts and Karin Slaughter." -Best Thrillers

"Danger, mystery, and sizzling-hot romance right down to the last page." - ★★★★★ Amazon Review, The Creek

"Amanda McKinney wrote a dark, ominous thrilling tale spiked with a dash of romance and mystery that captivated me from start to finish..." -The Coffeeholic Bookworm, The Lake

"The Storm is a beautifully written whodunnit, packed with suspense, danger, and hot romance. Kept me guessing who the murderer was. I couldn't put it down!" - ★★★★★ Amazon Review

4.6 out of 5 stars
4.6 out of 5
162 global ratings
How are ratings calculated?
To calculate the overall star rating and percentage breakdown by star, we don’t use a simple average. Instead, our system considers things like how recent a review is and if the reviewer bought the item on Amazon. It also analyzes reviews to verify trustworthiness.

mauireader
5.0 out of 5 stars Riveting Mystery Romance
Reviewed in the United States on June 20, 2020
Verified Purchase
I do not know where to begin, this was such an awesome read. I loved it, one of my favorites so far and it will definitely be read again and again. There was some real life issues that Jagger was dealing with, it was slowly dispensed to the reader as the story went along and then at the end the pieces all fell together nicely. Jagger had plenty of baggage he did not even know he had.
There was a lot of great content throughout, hilarious dialogue, secrets, a spooky tree with dolls and some cool K9s. There was so much to this story I did not where it was going to go.
And Sunny Harper, there were layers and layers of Sunny Harper. She is a glass half full girl. So much more to her story, she had a core of strength standing on her own two feet, she decided to not be a victim and to take control of being a new woman going forward.
Awesome insight to the characters, they both had shattered trust issues and how they both evolved throughout the book was very well done. And let’s not forget it was a wonderful romance as well, their build up was realistic and sizzling. Excellent book and highly recommend. A full length stand alone story with a HEA.
Read more
One person found this helpful
Helpful
Comment Report abuse

EG
4.0 out of 5 stars Not What I Expected
Reviewed in the United States on June 25, 2020
Verified Purchase
It took me quite a while to get into the plot of JAGGER. To me it didn't start like the other Security books which grabbed you from the beginning. But I kept reading and am glad that I did. Turned out to be intriguing and hard to put down. I did enjoy it, just not as much as some of her other books, most of which I gave 5 stars. One thing that did bother me was that Jagger's personality was not at all as presented in his appearances in the Cabin and Security series. In those he was still a forceful personality and loyal, but in his own book he seemed to gruff and self centered. Guess the love of a good woman changed that.
Read more
2 people found this helpful
Helpful
Comment Report abuse

Sue Kay Davis
5.0 out of 5 stars A Older Cop, A Murder, and A Beautiful Younger Who Who Keeps Being Attacked OVER 18 READING
Reviewed in the United States on September 13, 2020
Verified Purchase
Jagg a nonsense cop has is hands full. A murder in the street, a beautiful woman (Sunny) standing over him who says she had been attacked and a third person had been there who did the shooting. Is she telling the truth? Sunny is something of a mystery to him that he wants to solve. A woman who was attacked six years before by her ex boyfriend and nearly killed. Her millionaire father who she has a strange relationship with. She runs security dog training business with her team of dogs. Haha is drawn to her from the moment he first see her it just takes him awhile to realize it. She doesn't trust men and he doesn't trust women. This book is a thrilling, funny murder mystery with a love story thrown in just for the fun of it. And you will read 333 pages before any sex takes place and you won't need it to keep you enjoying your book. I can't wait for the next one coming out about Jagg's brother.
Read more
One person found this helpful
Helpful
Comment Report abuse

Patty61
5.0 out of 5 stars Wow
Reviewed in the United States on July 2, 2020
Verified Purchase
Jagger is a hot steamy book that at first acts the chraters are talking to you. So you know all the secrets but with all the twists and turns your crying, your laughing, your cringing and sighing with relief. I highly recommend this series. Can't wait to read Ryders story.
Read more
2 people found this helpful
Helpful
Comment Report abuse

EBM
5.0 out of 5 stars What a great read!
Reviewed in the United States on June 25, 2020
Verified Purchase
I loved this book! From the beginning it was a detailed description that let you see Jagger from inside his head. I enjoy the way that we get to know him in this book and still get a glimpse back at others. I love how Amanda McKinney has a family of characters and in each book in the series it gives you a look inside the main characters to see who they are. She develops a character in each book while you get updates on the characters from previous books. Suspense books with a romance intermixed are my favorite and this definitely delivered. Looking forward to the next one!
Read more
One person found this helpful
Helpful
Comment Report abuse

SIMATSU
5.0 out of 5 stars Falling Hard
Reviewed in the United States on September 26, 2020
Verified Purchase
Another solid read. Jagger is a man on the edge. Former navy SEAL and current hard nosed detective. Sunny is a woman with secrets. There are too many coincidences happening around her. Once again Amanda McKinney takes her readers on a wild ride of discovery. Action is served up as Jagger explodes on anyone who dares to get in his way. But as the saying goes the harder the bigger they are it’s the harder they fall and when Jagger falls for Sunny it sure is hard.
Read more
Helpful
Comment Report abuse

Katie
2.0 out of 5 stars Lots of witchcraft references
Reviewed in the United States on October 1, 2020
Verified Purchase
I'm giving this two stars because the writing itself was good. I just didnt care for the story or Jagger. He hates dogs, negative personality, and comes across as dirty (as in doesnt shower, wear clean clothes, etc). Not much to like about him.
Also, I was not expecting the book to revolve around witchcraft and to be so detailed about it. Not a book for me.
Read more
Helpful
Comment Report abuse

Robin
5.0 out of 5 stars Great read! Darker and grittier and keeps you engaged!
Reviewed in the United States on June 18, 2020
Verified Purchase
Amanda McKinney always writes a good story. Jagger is no exception. It’s a bit darker and grittier than her usual. I mean a man who hates dogs??? But the story really got interesting after the first few chapters. The suspense was good as was the romance. It was nice to get to know Jagger after briefly meeting him in the other stories. I can’t wait to read other future books in the series.
Read more
One person found this helpful
Helpful
Comment Report abuse
See all reviews

Kindle Customer
5.0 out of 5 stars Jagg
Reviewed in the United Kingdom on June 27, 2020
Verified Purchase
Excellent book well worth the wait, loved it very much. Intrigue all the way. Loved the dialogue from Jagg very entertaining, made me laugh out loud at times . I recommend to everyone to get into this series its excellent, going to order the next one now, I am a fan of Amanda McKinney and enjoy all her books . Thanks
Read more
Report abuse

Hanbarn
2.0 out of 5 stars Okay read
Reviewed in the United Kingdom on September 16, 2020
Verified Purchase
Just an okay read. Swithered with the three stars but eventually settled for two as it felt disconnected at times and characters who appeared weren’t always explained. Loved the intelligent but morose detective but others left me feeling bleh. Not an author I’ll look for.
Read more
Report abuse

Artylady
5.0 out of 5 stars Loved this book...couldn't put it down
Reviewed in the United Kingdom on October 7, 2020
Verified Purchase
Amandas books are fast paced, and as ction packed for a thriller/romance. l love the fact it was mainly based around the hero.
Read more
Report abuse

LucyLou
5.0 out of 5 stars Amazing read!
Reviewed in the United Kingdom on September 14, 2020
Verified Purchase
Oh god I adored jagg, he was something else. Loved this story from start to finish was gutted when it had to end but loved this.
Read more
Report abuse

jillian Fox
5.0 out of 5 stars Rattling good read
Reviewed in the United Kingdom on June 18, 2020
Verified Purchase
Thoroughly enjoyed the book. Have read previous books. Just wished there was follow up to the girls from the previous books.
Read more
Report abuse
See all reviews