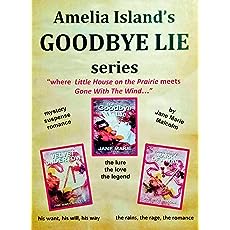 VICTORIAN SOUTHERN FICTION: Oh, the LURE, the LOVE, the LEGEND... of The Goodbye Lie historical mystery-romance series, set on Victorian Amelia Island, Florida, in the late 1800s, "...where Little House on the Prairie meets Gone With The Wind..."

Author Jane Marie Malcolm, known to her fans as Gracious Jane Marie, is originally from Erie, Pennsylvania, USA. She celebrates heart and home every day with roses, recipes, and romance on her family-friendly blog at www.GraciousJaneMarie.blogspot.com. This tasteful blog includes articles on Gone With The Wind, Hollywood Hearts, Travel, Gardening, Recipes, Crafts - far too much to list here. Often hilarious, Jane Marie is the funniest person she knows - and her blog is sometimes even informative.

BOOK SIGNINGS - If you are ever in Fernandina Beach on Amelia Island, Florida on a Saturday, you may just catch Jane Marie in front of Sea Jade's, an old-Florida souvenir shop, located at 208 Centre Street. She often meets and makes new friends while explaining bits about her Goodbye Lie series as she signs copies of her novels. WARNING: Jane Marie's enthusiasm is catching!

A wife, mother, grandmother, and former first lady of Fernandina Beach on Amelia Island, Florida, by virtue of marriage to the former mayor, Bruce Malcolm, Jane Marie makes her home there with her charming husband, Bruce, and a dog and kitty. She is an avid Prince of Peace handbell ringer, as well as, a member of the American Legion Auxiliary, the Amelia Island Museum of History, the General Duncan Lamont Clinch Historical Society of Amelia Island and Writers by the Sea. Jane Marie is a practicing rosarian, quilter, and artisan, and has fashioned family christening gowns by way of French heirloom hand sewing techniques. Her cleverly created painted Secret Pebbles and crafts tie into the GOODBYE LIE Series. She dabbles at playing the musical saw and has mastered the harmonica and canjo - to the best of her ability.

Jane Marie invites you to enter her world of lace and laughter at GraciousJaneMarie.com. Discover the fascinating Dunnigans, the Irish family recorded in The GOODBYE LIE, Amelia Island's dramatic series. Let her imagination embroider your realm with mysterious wanderings and delightful rainbows because Jane Marie Malcolm believes in happy endings.
Read more 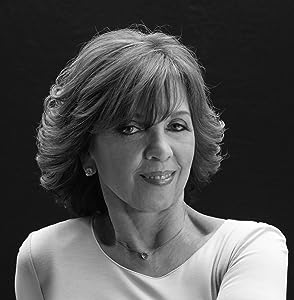 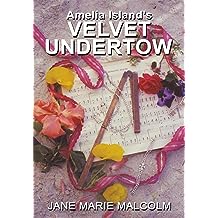 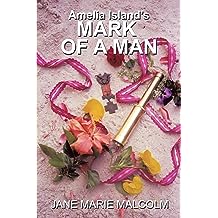 Intense drama, passion and laughter satisfy every emotion.
Realistic characters, convincing dialogue and slap-you-silly moments in
Mark of a Man will delight, charm and touch hearts.
-Kate Brown, author of The Rose Legends

Amelia Islands
Mark of a Man
It is 1898.Amidst the Spanish American War and a horrifying hurricane, the beloved Dunnigan family struggles to salvage their beguiling island existence. Pat Dunnigan lives hard and loves wild. His sister, Marie, is a beacon for trouble. Will she forgive the unforgettable? Will Pats demons become hers? Will he drive away his lover? Is she unsuitable?
Pleasing. Poignant. Passionate. This is Amelia Islands Mark of a Man.
* * *
Visit Jane Maries family-friendly blog at GraciousJaneMarie.blogspot.com, part of GraciousJaneMarie.com, for more about Amelia Islands Goodbye Lie series, plus articles, recipes, projects, Martha Bear silly stories, hand-painted Secret Pebbles, future novels, and other treats to delight her diverse legion of readers. Find Jane Marie Malcolm on Facebook, YouTube, Pinterest, Twitter and Instagram, too, and join her verbal voyage to
Read more
Other Formats: Paperback 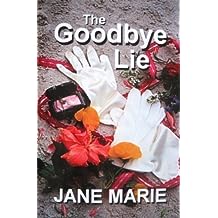 The Goodbye Lie (Amelia Island's Goodbye Lie triology Book 1) Jul 1, 2012
by Jane Marie Malcolm
( 10 )
$2.99
Where Little House on the Prairie meets Gone With The Wind ...
HIS FACE DARKENED. "HAS HE KISSED YOU YET?"
Men will die for Breelan Dunnigan. The heart-wrenching romance and unexpected drama don't stop until the last page of The Goodbye Lie, Jane Marie Malcolm's first installment in her mystery-romance series, set in 1882 on Florida's Amelia Island. An aspiring writer, Breelan is literally swept away, first by a tornado at the beach and then a handsome stranger, who steps into her life and into her soul. Escape to New York City brings new love, but when Breelan returns to her small town island home in the deep South, her existence has turned upside down. Strong Irish bonds and values are soon pitted against passion, jealousy and murder in this richly ripe saga. Readers will rejoice in the clever twists of plot. Abundantly layered personalities, late Victorian conventions and gentle humor flavor up this mix of epic romance, treachery and glory. This is only the beginning of The Goodbye Lie series as it continues with Amelia Island's Velvet Undertow and Amelia Island's Mark of a Man, more Fernandina fancies ...
Read more
Other Formats: Paperback , Mass Market Paperback