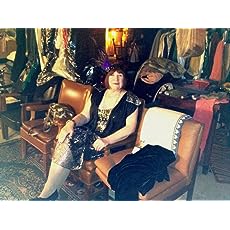 Janice Oberding is a historian, true crime buff, paranormal enthusiast and investigator. She is also the author of more than 30 books on topics ranging from ghosts to true crime to history, the strange and unusual, and mystery. She writes both non-fiction and fiction. Raised in California and Nevada, much of her work is focused on the two states.

In 2001 she created the History Mystery Ghost Walk (Biggest Little City Ghost Walk) in downtown Reno based on her book Infamous Reno. In 2002 she helped to develop Truckee Meadows Community College's (non credit) Paranormal Series which started as a one day conference. The series continues to this day and Janice is still involved with it.

She is a public speaker who presents throughout the country. Her most frightening speaking experience occurred in 2007 aboard a cruise ship in the middle of the Atlantic during Hurricane Noel. However, she was able to spend Halloween night in the middle of the Bermuda Triangle on that same cruise.

She has appeared on numerous television shows and documentaries. Those she has worked with include the Syfy Channel, Channel, the History Channel, Living TV and the Travel Channel, and has appeared in episodes of Dead Famous for Two Four productions Living TV, Scariest Places on Earth and Ghost Adventures.

Aside from those who were incarcerated there, she is one of only a few people who have spent an entire night at Alcatraz. She had done this not once, but three times. In fact one of the more intriguing TV shows she has worked with remains the Ghost Hunters (Jason Hawes and Grant Wilson) Alcatraz episode in which she was invited to accompany the team to the island.
Read more 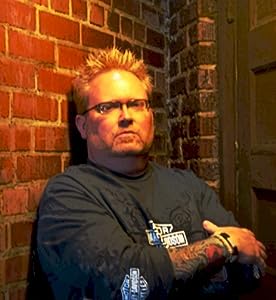 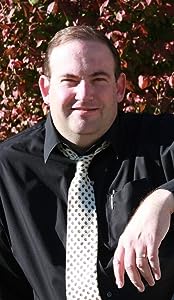 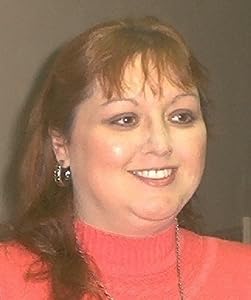 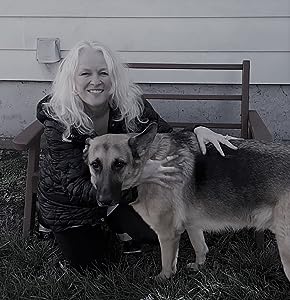 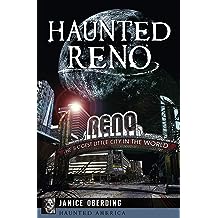 The flashing neon lights of Reno harbor a ghastly past. With its wide-open gambling, divorce laws, and around-the-clock casinos and bars, the Biggest Little City in the World was a rough and wild town with a turbulent history.

Victims of Priscilla Ford’s Thanksgiving Day massacre haunt a downtown street. After a disappearance and death shrouded in mystery, the spirit of Roy Frisch still lingers near the location of George Wingfield's home. Lynched by a mob for a death that never happened, the angry ghost of Luis Ortiz still walks the bridge at night. In this book, Janice Oberding unearths the haunting history that put the “sin” in Nevada’s original Sin City. 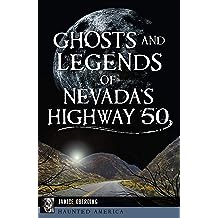 Ghosts and Legends of Nevada's Highway 50 (Haunted America) Sep 17, 2018
by Janice Oberding
( 8 )
$11.49
The 287-mile stretch of highway that runs east to west across Nevada's desert is billed as the "Loneliest Road in America." But those who explore it find there is plenty to discover along the way in the towns of Austin, Eureka, Ely, Fallon and Fernley. Every one of these places has its own unique history, ghosts and stories to tell. From the sordid lynching of Richard Jennings to the humorous legend about a famous sack of flour, author Janice Oberding treks across Highway 50 seeking spirits and uncovering the tales of Singing Sand Mountain, the Red-Headed Giants, the Giroux Mine Disaster and many more.
Read more
Other Formats: Hardcover , Paperback 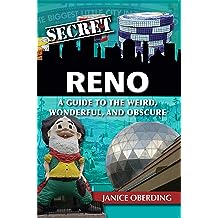 How about a lazy day kayaking down the Truckee River? You might want to climb the world’s tallest artificial climbing wall, or take a stroll where the lynching of an innocent man occurred in 1892. But be warned—his angry ghost is said to haunt the location, occasionally harassing passersby. If you’ve donned your leathers and are all in for a bike ride, you might want to know that Reno has an annual motorcycle rally not to be missed. Local author Janice Oberding loves to find adventure off the beaten path and be your guide to unconventional, but worthwhile, exploration. All you’ll need is here in this book about the Biggest Little City’s secrets.
Read more
Other Formats: Paperback 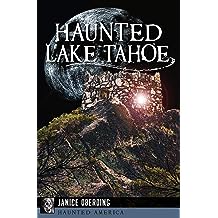 Locals say the ghosts of the Donner Party haunt their doomed campsite in the Sierras. Wealthy recluse George Whittell is said to have never left his beloved Thunderbird Lodge, though he died in 1969. The ghosts of Frank Sinatra, Marilyn Monroe, and members of the Rat Pack are thought to gallivant in the showroom and cabins of the Cal Neva Lodge, a popular celebrity retreat. Prisoners from the past may remain in the old Truckee Jail, and the restless spirit of a murdered showgirl might linger in the Tahoe Biltmore.

Travel back to Tahoe’s golden age and explore the spot where glamour meets ghoul . . . 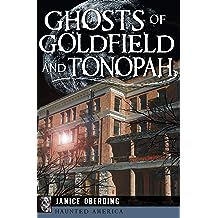 Ghosts of Goldfield and Tonopah (Haunted America) Jun 8, 2015
by Janice Oberding
( 9 )
$2.99
Meet the prospectors, forlorn widows, and other spirits who haunt the historic remnants of Nevada's former boomtowns—includes photos!

In the throes of early financial disaster, the Silver State had little to entice newcomers—or discourage residents from leaving.

Jim Butler’s silver discovery at Tonopah changed everything. With a subsequent gold discovery near Goldfield, the rush was on, and from these burgeoning mines, Nevada’s early leaders amassed their wealth and power.

In this fascinating book, paranormal historian Janice Oberding shares firsthand accounts of ghostly encounters in the Goldfield and Mizpah Hotels and uncovers the history behind the mysterious cowboy ghost, the haggard hitchhiker, and other eerie local tales.
Read more
Other Formats: Hardcover , Paperback 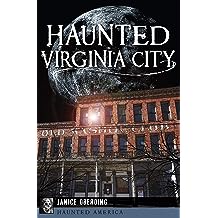 Haunted Virginia City (Haunted America) Sep 28, 2015
by Janice Oberding
( 12 )
$10.99
The author of Haunted Nevada explores the spooky goings-on in the city named one of the top-three most haunted towns in America.

Unlike any city in America, Virginia City epitomizes the notion of a western boom-and-bust ghost town. The Comstock Silver Rush lured wealth seekers from around the world, including a young Samuel Clemens. Despite the fortune some found, not all of the town’s earliest settlers rest easy. Shops, hotels, boardwalks, and cemeteries are said to be filled with the supernatural remnants of Virginia City’s hardscrabble characters and their violent propensities. The queen of haunted Nevada, Janice Oberding, mines Virginia City’s spectral history, from the ghost of Henry Comstock to the ghostly Rosie and William of the Gold Hill Hotel.

“Virginia City is known for its rich mining history that designated Nevada as the Silver State. But to local residents and paranormal investigators, it’s better known as a place to look for ghostly dwellers.” —Reno Gazette Journal
Read more
Other Formats: Hardcover , Paperback 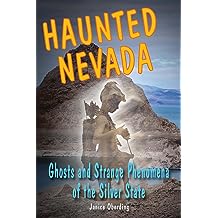 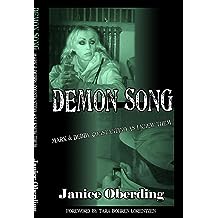 Demon Song: Mark and Debby Constantino as I Knew Them Mar 31, 2016
by Janice Oberding, Tara Bohren-Lorentzen
( 18 )
$5.99
Mark and Debby Constantino. Their names were magical. Once upon a time everyone in the ghost hunting field knew and adored the EVP specialist husband and wife team. They were paranormal royalty…rock stars. But nothing is ever as it seems, behind closed doors their lives were slowly falling apart. It would end in the worst imaginable tragedy. In desperation, Mark would do the unthinkable. He would kill his beloved Debby, her roommate and himself. In Demon Song author Janice Oberding has written an honest, at times heartbreaking, account of her friendship with the Constantinos in the early days long before the paranormal field even knew their names. As friend and mentor, Janice traveled the country with Mark and Debby, investigating and appearing at events. Offering a glimpse into that time, Demon Song shows a far different side of Mark and Debby than fans ever saw
Read more
Other Formats: Paperback 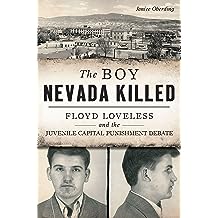 The Boy Nevada Killed: Floyd Loveless and the Juvenile Capital Punishment Debate (True Crime) Feb 20, 2017
by Janice Oberding
( 6 )
$11.49
At seventeen, Floyd Burton Loveless became the youngest person ever executed by the state of Nevada. What led him to that end was just as tragic. Following a series of family catastrophes, Loveless was a petty thief by age twelve and a confessed rapist at fifteen. Sentenced to seven years at an Indiana state boys" reformatory, he escaped after a month in custody. The ruthless teen robbed his way to Carlin, Nevada, where he shot and killed a constable who spotted the stolen car he was driving and confronted him. After a protracted legal battle, Loveless died in the gas chamber on September 29, 1944. Author Janice Oberding recounts the sordid details that sparked national controversy over the constitutionality of juvenile capital punishment.
Read more
Other Formats: Hardcover , Paperback 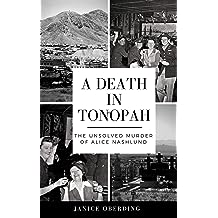 A Death in Tonopah: The Unsolved Murder of Alice Nashlund Jan 3, 2019
by Janice Oberding
( 5 )
$5.99
Prostitute Alice Nashlund was brutally murdered in the small town of Tonopah, Nevada days before Christmas 1951. Her murder has never been solved. Raymond Millan was charged with the crime. But thanks to the work of a young William Raggio, who went on to serve first as Washoe County District Attorney and then Nevada senator, Millian was found not guilty. Was he the killer or merely a convenient scapegoat? A Death in Tonopah examines the murder of Alice Nashlund and reaches a shocking conclusion as to the killer's identity.
Read more
Other Formats: Paperback 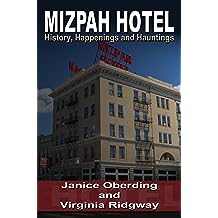 Mizpah Hotel: History, Happenings and Hauntings Jun 20, 2012
by Janice Oberding, Virginia Ridgway, Bill Girard
( 5 )
$9.00
Featured in a recent episode of Ghost Adventures TV show, the Mizpah Hotel in Tonopah Nevada was built in 1907 to serve the needs of those making fortunes in nearby silver and gold. The Mizpah was not safe from the hard times that fell on Tonopah. Closed and re-opened several times over the years, the Mizpah has been owned by several different people. The resident ghost is the Lady in Red who haunts the fifth floor.
Read more
Other Formats: Paperback 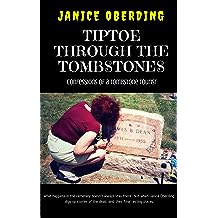 Tiptoe Through the Tombstones: Confessions of a Tombstone Tourist Dec 23, 2018
by Janice Oberding
( 1 )
$5.99
Visiting cemeteries is not for everyone. Only those who appreciate the art, the stories, the legends and the history behind cemetery gates will understand and appreciate what it means to be a tombstone tourist. Author Janice Oberding is definitely a tombstone tourist. In these adventures she brings the reader along as she, her husband and her friends, seek history, ghosts and the unexplained while experiencing cemeteries throughout the country.
Read more
Other Formats: Paperback