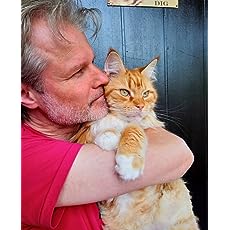 Born in England, raised in Sweden, Jari Hinshelwood first made noise as a drummer. Developed an interest in film and TV after music studies in LA and subsequently began writing. Notably, creating and scripting the kids' series 'Skrotarna' for national Swedish television broadcaster SVT. Jari has also written and produced over two dozen audio drama podcasts, dabbled in animation and short film.

While on hiatus from producing an online film series, due to the 2020 Corona misery, he took a fresh look at some old book manuscripts, and began restoring them for new release. Starting with The Aid Station.

Be it screenplays or novels, Jari's fiction shows a fondness for vivid characters and comedic absurdity, often set against a sci fi backdrop.

Jari is a healthcare professional and lives with his wife Anette in Vänersborg in the west of Sweden.

By the way, he still plays drums. 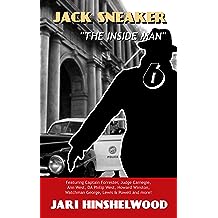 JACK SNEAKER: THE INSIDE MAN - Part Six Nov 19, 2020
by Jari Hinshelwood
$1.50
High noon at City Hall! In the sixth part of the Inside Man caper, it's all about rescuing District Attorney Philip West and Ann before time runs out, and nailing the high-ranking bad guy. Through the mysterious bowels of the grand building our hero and Captain Forrester must go, led by George, the soon-to-retire guard. The result can only include gunfire, insanity, quick lunches, death and a shocking climax in the sixth and final part of Jack Sneaker & The Inside Man! 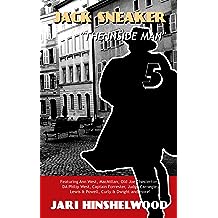 JACK SNEAKER: THE INSIDE MAN - Part Five Nov 11, 2020
by Jari Hinshelwood
$1.50
After the truly traumatic moment at the morgue, Ann West has a confession to make. Judge Carnegie preaches to the decidedly unconverted Jack has a bit of convincing to do himself, to the local constabulary, and a plan is set in motion. Then disaster strikes at the clock shop. This is part five of the six-part short reads series Jack Sneaker and The Inside Man! 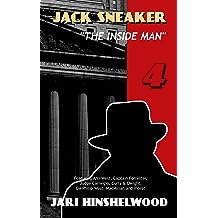 JACK SNEAKER: THE INSIDE MAN - Part Four Nov 6, 2020
by Jari Hinshelwood
$1.50
Hospitals are safe places. Particularly when a subject is under guard. You think that, at least.
In part four of this short reads series, a poached take on hard-boiled crime fiction, Jack Sneaker's hunt for the Inside Man doubles up.
A forced meeting with a city official creates suspicions. Then Captain Forrester has dramatic news. A body has turned up...
Read more 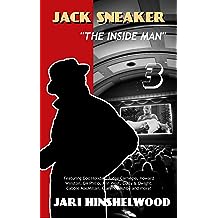 JACK SNEAKER: THE INSIDE MAN - Part Three Oct 27, 2020
by Jari Hinshelwood
$1.50
In part three of the humorous six-part short reads series, Jack Sneaker must revisit an old contact, who might be able to dig the bullet out of the DA, since he refuses to go to hospital.

Then bad guy muscle turns up on his tail. Evasive action is required to lose them, because tonight Jack has a particular target in mind. Nothing must stop him from getting the necessary evidence to secure this case. But something does...

'JACK SNEAKER - THE INSIDE MAN' is a poached take on hard-boiled crime fiction.
Read more 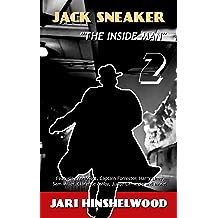 JACK SNEAKER: THE INSIDE MAN - Part Two Oct 10, 2020
by Jari Hinshelwood
$1.50
In ‘THE INSIDE MAN’ caper, Jack Sneaker must find a sinister mastermind behind a group of corrupt officials in local government. A secret outfit that has set in motion plans to take control of Gas City, using all means at their disposal, not stopping short of murder.

In the second part of the six-part comedy noir series, Jack comes clean with Ann West. Also to Captain Bob Forrester over at the 18th Precinct, believe it or not. Will they still be able to locate the DA before it's too late?

'JACK SNEAKER - THE INSIDE MAN' is a poached take on hard-boiled crime fiction. 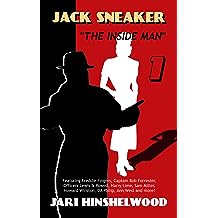 JACK SNEAKER: THE INSIDE MAN - Part One Sep 21, 2020
by Jari Hinshelwood
$1.50
Jack Sneaker is a private investigator. And a good one. On par with contemporaries Sam Spade and Philip Marlowe, to name a couple.

City lights reflecting on wet streets and steam rising from curbside grates. Could be New York City or Chicago. But no. This is the rough and noisy metropolis known as Gas City. And like any big city it has everything one could hope for. Or be sorry about.

Which is why Jack’s some-time friend, Captain Bob Forrester over at the 18th, needs all the help he can get. Something he’ll never admit to. Bob likes doing everything by the book, sees no merit in Jack’s ‘flexibility’ and thus, their friendship is one of ‘mutual respect’.

Jack never particularly wanted to become a private eye, but it seemed like a good idea at the time, failing all else. Those who know him, like Harry Lime, owner and proprietor of Harry’s Bar, could tell you that it has a lot to do with Claire. Or, to be more precise, forgetting Claire.

You see, before going straight, Jack was part of a safe-cracking gang operating out of a crummy back street theater downtown. On that fatal night when everything went wrong, Jack, Joe Chesterton and the others, ran right into the police. They’d been tipped off. To cut a long story short, Joe made it, the driver got shot. The leader of the gang, who happened be the theater director, took off with the dough and got on the next clipper to Rio.

The point of mentioning this is that Claire’s show over at the Ritz opened on the same night. A Rodgers & Hammerstein thing in which she was one of the back-line dancers. Jack had planned to propose to her after the show, but along came this job and screwed that up. So, he figured on popping the question the following morning, hoping for good show reviews to back him up. However, things going the way they went, Jack decided not to bother. Sitting behind bars down at the 18th. All this took place before Bob Forrester took over the precinct.

While in jail, Jack received the news that Claire had taken off to Hollywood with the show’s producer. This hit Jack hard. Over in Tinseltown Claire made it. Well, sort of. She got a so-so contract with MGM as a one of the stand-ins for the Goldwyn Girls.

Jack hasn’t ever really gotten over all this. And he prefers not to even talk about it. And he hates Hollywood musicals (you might be interested to know Bob Forrester and his wife Betty love Hollywood musicals).

Jack got his sentence reduced from eight years to five, for good behavior among other things, and teamed up again with old pal Joe Chesterton and started a straight business, designing safes. Timing was probably the reason the business never took off. And so, in misery, and to try to erase the still painful memory of Claire, Jack opened up shop as a private investigator.

Practically each night, after catching crooks, Jack would sit on the bar stool at Harry’s and pour out his heart while Harry poured the drinks and listened. Being a good bartender, Harry knew exactly when to stop before things got out of hand. Nowadays, when Jack comes in to Harry’s it’s for black coffee and a couple of donuts. And jazz. Served up with skillful boredom by Harry’s black pianist Sam Miller on the upright. Both Jack and Harry like jazz, but don’t know much about it. And Sam’s given up trying to teach them.

“A poached take on the hard-boiled genre.
Read more 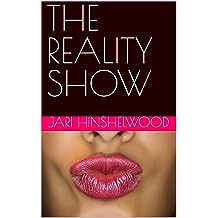 THE REALITY SHOW Aug 5, 2020
by Jari Hinshelwood
$4.99
Ever wondered just why reality television is so fascinating? Well, first of all, there’s the unbelievable reality of it. ‘My goodness, these are real bonafide morons, and they actually signed up for this.’ This sad state of affairs is summed up nicely in an old English saying. ‘Some mothers do have ‘em.’
Alas, they do.
But what you might not know is that reality television, the kind where young men and women give us the backside of humanity in full glory, is actually part of a sinister plan. A plan not of this world.
Imagine if you lived on a planet a few light years away and stumbled across foreign television signals. A show depicting a group of beings revealing pretty much everything they’re made of. What would you make of that race?
In the THE REALITY SHOW we follow, in considerable detail, a groundbreaking reality show. But we also follow two separate alien races. One intimately connected to the show. The other drawing inspiration from it. Each has a very different view of the concept and purpose of our kind of reality television. And both will prove to be completely lethal.
This book offers a vital and timely satire on modern television and the attitudes of its subjects and the attitudes of us, the viewers, who keep making the phenomenon possible.
Find out what the reality really is in THE REALITY SHOW. 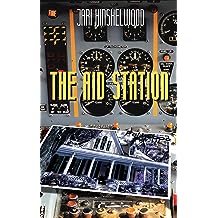 THE AID STATION Jul 12, 2020
by Jari Hinshelwood
$3.99
Human occupation has spread to other parts of the galaxy. In the Parallel system, ageing bomber pilot Brett Coles finds himself removed from the air force and having to fly aid missions to the occupied races.

An old mansion is turned into an aid station and the operation will be run by the dubious Sidney Lemongrass, a former lawyer. Also at the aid station we find Forbes Tender, man about the house, who is actually a humanoid robot who wants nothing more than be furnished with the ability, specifically the tool, to be able to satisfy women. Until he is thus equipped, he is a lethal danger to humans.

Donatella the ex-wife. And her new toy boy Rodney, whose accident is quite horrendous, but also funny, on the whole. And, of course, we have the dramatic, intense love story. And let's not forget Teeranne, the hooker with surprising business acumen.

The Aid Station is, quite simply, a riot.
Read more
Other Formats: Paperback