Jarmo and millions of other books are available for Amazon Kindle. Learn more
Share <Embed>
Have one to sell?
Sell on Amazon 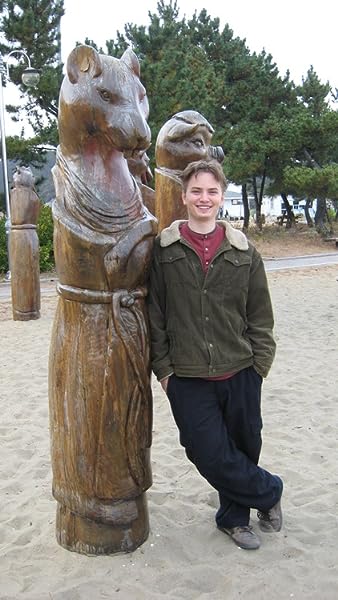 Adam Spielman lives in Minnesota. He loves playing hockey and poker, drinking dark beer, and reading good books. After several years of teaching English in South Korea, he set fire to the ABCs and returned home to write absurd fiction.

Start reading Jarmo on your Kindle in under a minute.

Alex
5.0 out of 5 stars Disturbingly Enjoyable
Reviewed in the United States on October 3, 2012
Verified Purchase
Jarmo is a completely unique book. I can guarantee that you have never read anything like it. Here is a breakdown of what I love the most:

1. Witty, intelligent characters, storylines, and references
The utter wittiness of this book is absolutely my favorite part. But it's a kind of dark wittiness that is both hilarious and incredibly disturbing. A few times throughout I had to walk away from the kindle because I just couldn't believe what was happening to the characters. But at the same time, there is a lightness to even the dark scenes that I've never experienced before. You can almost feel the author laughing at you through the pages.

2. Portrayal of taboo subjects
Often in fantasy books, you read taboo things that are the norm for that world so their problematic nature is left uninterrogated, which to me always feels like a cheap way out. But rather than adopt some kind of otherwordly system of morals, Jarmo makes the taboo scenes all that much more complex because they are still wrong in the world. However, the morals don't always apply to all the characters--which is a really interesting tension.

3. Jarmo himself
Jarmo is one of those transcendent characters that could live way beyond the book. He's sort of like a Tom Bombadil written by George RR Martin trapped in the land of Lewis Carroll. He is without a doubt one of the weirdest personalities I have encountered.

The thought that this book might stay relatively obscure saddens me, because people really should read it. I think it could easily be the next big book for adults--and could even revitalize and redefine the fiction market. It's cheap, and you can even borrow it for free if you're an amazon prime member. You will not be let down.

Kindle Customer
5.0 out of 5 stars Dark, Lyrical, Enthralling.
Reviewed in the United States on January 14, 2014
Verified Purchase
Not for the queasy, this is not a happy little light hearted adventure. It is very well written. Several times I found myself rereading sentences and phrases that were exceptionally elegant. (I am struggling with this review, it is hard to know how to explain my thoughts) There were very few typos, which was a refreshing change. The pacing was good. I felt like it was both a good action read but also a study in humanity without being preachy. Mostly I found it fascinating and resentful of time spent on daily chores until I could finish it. This book will suck you in!
Read more
2 people found this helpful
Helpful
Report abuse

Amazon Customer
5.0 out of 5 stars An Insanity!
Reviewed in the United States on February 5, 2014
Verified Purchase
Jarmo is a flat out, no holds barred look at how insanity is the only rational choice in a cruel world. The characters are real, beaten down, overwhelmed and the story is unforgiving and unapologetic. I really enjoyed the book and its dark twists and turns.
Read more
One person found this helpful
Helpful
Report abuse

Racheal
5.0 out of 5 stars Disturbingly Beautiful
Reviewed in the United States on February 5, 2014
Verified Purchase
Beautifully written book. Unexpected and original plot with memorable characters and storylines that compel you to keep reading. Not a book for anyone that can't handle intensely graphic scenes. There were parts that had me cringing. There were also parts that I must have reread five times that I found particularly insightful or stunning. Definitely going to be periodically checking in to see if the author is coming out with anything else.
Read more
2 people found this helpful
Helpful
Report abuse

Todd Sullivan
5.0 out of 5 stars A Must Read by a Brilliant Author
Reviewed in the United States on February 24, 2015
It's been a while since I read this title, but I still remember it vividly. One of the better, more unique novels I've read in the last five years by quite a young author. Definitely if you're looking for a challenging narrative that's still very engaging and extremely smart, check out JARMO. You won't be disappointed. I don't bat around the word 'genius' lightly, but the narrative of this book comes close to the definition.
Read more
Helpful
Report abuse
See all reviews