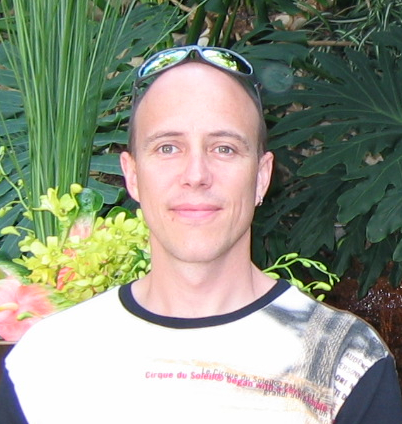 Jason Blacker was born in Cape Town but spent most of his first 18 years in Johannesburg. His thirst for justice and peace for all humanity was formed in the African sun. He writes mystery fiction and literary fiction as well as poetry and daily haikus at his haiku blog.

When not writing he is either spending time with his wife and son or herding the 4 cats that rule the roost. Other than that, he enjoys squash, both the game and the vegetable and running. A healthy body allows for a healthy mind and a fertile creative soil from which the writing springs. 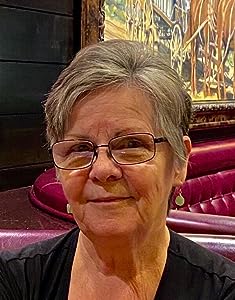 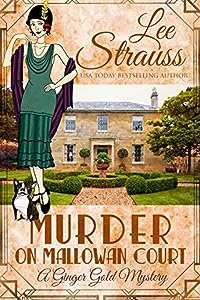 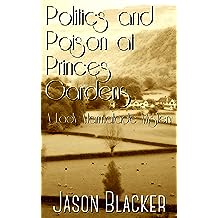 Politics and Poison at Princes Gardens (A Lady Marmalade Mystery Book 8) Dec 11, 2020
by Jason Blacker
( 5 )
$5.99
Frances is involved in her very first case as a young woman of 17. At the turn of the twentieth century, Mr. Chamberlain’s housekeeper, Mrs. Buckham, at his London home is charged and convicted of murdering his personal secretary, Mr. Sefton.

In her final year at St. Mary’s all girls shool, Frances, with her best friend Florence, is reading The Observer at a tea room and learning about the miscarriage of justice and the lazy police work that led to Mrs. Buckham’s conviction.

Frances would like to know why no strychnine was found at either Mr. Chamberlain’s home or at Mrs. Buckham’s personal residence either. The motive appears weak too. Mrs. Buckham was found to have murdered Mr. Sefton to protect her daughter’s honor. But is Mrs. Buckham cut from a killer’s cloth? Frances doesn’t think so.

From the halls of the Palace of Westminster to the South African Boer War and Irish Home Rule, there are suspects seemingly under every nook and cranny. But will Scotland Yard be interested in the findings of an amateur sleuth, a young women, just finished secondary school?
Read more
Other Formats: Hardcover , Paperback 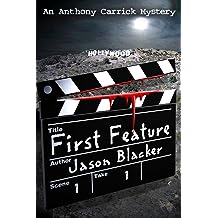 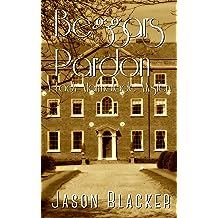 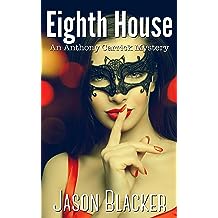 Eighth House (An Anthony Carrick Mystery Book 8) Jan 2, 2021
by Jason Blacker
( 2 )
$5.99
In the fall a woman's body is found at the Calabasas landfill. She is remarkably attractive and unblemished. She's also dead. She is naked except for a red chemise. She has been placed with care but there is nothing to identify her by. Captain Roberts of the LAPD has called in Carrick to help with this suspicious death.

All leads end up nowhere. But it appears she's not the only woman found dead at the landfill. Back on New Year's day of two thousand a woman was similarly found. She too was unblemished, attractive and left with care. Both of these women had recently had intercourse before their deaths. The cold case from two thousand was handled by Carrick's mentor, retired detective Armando Ferrari.

With the help of the FBI, Carrick learns that there are an additional three cases where women, deceased and having recently had intercourse ended up dead in public areas. Carrick believes this to be an international prostitution ring of sorts.

The security guard at the landfill appears helpful, but when he turns up dead is that the end of the trail of clues? Or perhaps Carrick has other avenues to explore. From Moscow to LA these crimes seemingly involve the LAPD Chief of Police and Carrick's ex-wife's current husband.
Read more
Other Formats: Paperback 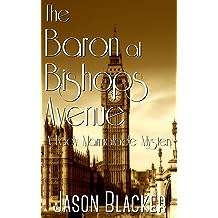 The Baron at Bishops Avenue (A Lady Marmalade Mystery Book 5) Mar 30, 2015
by Jason Blacker
( 3 )
$4.99
The 1920s in the UK and the USA were tough for many. There was prohibition in the States. And of course with the Great Depression a fella couldn’t drink his sorrows away. That left murder as consolation.

But for the Woolsack, the United Kingdom’s Speaker of the House, life couldn’t be better. A beautiful wife, arguably the most powerful position in politics next to the Prime Minister, and a side business supplying the Americans illicit liquor.

Life couldn’t get any better. Until it was taken from him suddenly. A young Constable Pearce and Inspector Husher need Lady Marmalade’s help in solving this highly political murder quickly.

From the docks of New York to the seat of British political power and the posh enclave of The Barons Avenue, not everything in politics, power and prestige is as enviable as it seems.
Read more
Other Formats: Paperback 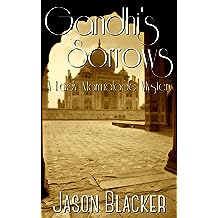 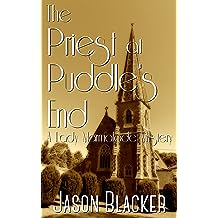 The Priest at Puddle's End (A Lady Marmalade Mystery Book 6) Oct 2, 2016
by Jason Blacker
( 8 )
$4.99
In 1946 Lady Marmalade is visiting her friend Flo in Puddle’s End for some much needed rest after the chaos of the Second World War. Florence has other ideas and encourages Lady Marmalade to help her solve an unsolved murder of the church Deacon from 1929.

But as they unravel the thread of this murder it leads them to some unsavory discoveries about current day Puddle’s End. The idyllic hamlet is hiding some dark secrets. And it would appear that somebody wants those secrets to remain uncovered.

The further Lady Marmalade and Flo dig into the past the more murders pop up in the present. The priest and the church administrator soon end up dead. But what could tie a murder from 17 years ago with the murder of a man of God in 1946? Francis will find out with the help of Scotland Yard and the digging up of dark secrets from a quaint and quiet English country village.
Read more
Other Formats: Paperback 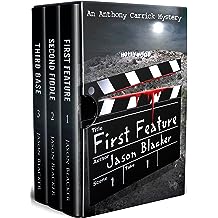 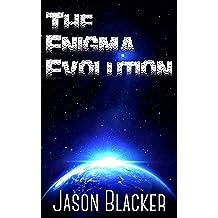 The Enigma Evolution Mar 20, 2016
by Jason Blacker
$4.99
A thousand years ago 100 million humans left Earth for a desperate attempt to start over.

One thousand years ago humanity was brought to the brink of extinction by the singularity, and an AI that saw them as nothing more than a plague to be eradicated.

But Gaea is now home, and one thousand years have brought renewed peace and optimism for new generations of humanity. Thanks in part to The Mothers, humanity’s new government. Life on Gaea is peaceful and everyone has their place.

But all men die at sixty six, and all women at seventy seven. They’re sent with pomp and ceremony to their creator called The One. But a young woman, Sunring Quickdust, isn’t so sure, and with the help of an evolved alien, she’s peeking through the veil.

Has the war against old Earth AI really ended? She’ll have to travel with the dead to the other side to find out for sure, and perhaps only then will humanity once and for all be truly saved.
Read more
Other Formats: Paperback 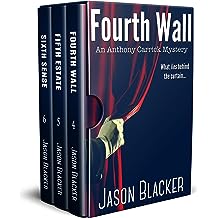 Now you can grab the 4th, 5th and 6th Anthony Carrick murder myseries in one Box Set!

In the midst of Hollywood elite, Anthony Carrick has to uncover the killer or killers of not one, not two but three murders. Could they all be related?

Anthony Carrick's not looking for a case. But when his good buddy, John Roberts asks a favor of him he can't refuse. Two young men have been murdered after visiting a biker bar in the wrong side of town in Jersey City. The only witnesses are the bikers themselves, but they're not saying much.

After visiting a fortune teller at the Santa Monica Pier with his daughter, Anthony Carrick is called back a few days later when that very same fortune teller winds up dead. Why couldn't she have foretold her own misfortune? Worse still, why is she made to look like a voodoo doll? 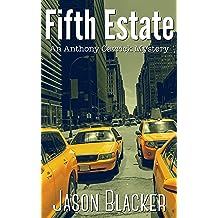 This is Anthony Carrick's murder mystery new release. Anthony Carrick’s not looking for a case. But when his good buddy, John Roberts asks a favor of him he can’t refuse. Two young men have been murdered after visiting a biker bar in the wrong side of town in Jersey City. The only witnesses are the bikers themselves, but they’re not saying much.

In Jersey to try and figure it out, Anthony finds the local police not all that helpful. But a connection that Roberts has in Jersey PD, Detective So-yi Park is eager to help figure these murders out.

Seems that one of the young men was working on secret weaponry for the DOD and he was talking to a reporter. But when some plumbers come by to fix a leak at Park’s apartment things get out of hand. Park ends up dead and Anthony’s shot twice in the belly. Could the plumbing company be a front?

From secret private military groups to pedophile rings, lucrative defense contracts, and world class hackers, there’s a lot to unravel if Anthony wants to save his life and solve a couple of homicides.
Read more
Other Formats: Paperback 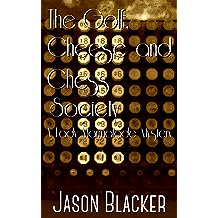 The Golf, Cheese and Chess Society (A Lady Marmalade Mystery Book 7) Oct 13, 2017
by Jason Blacker
( 10 )
$4.99
On holiday in the Lake District, a murdered woman leaves a note for Lady Marmalade. The note is garbled. Perhaps a cryptic message. She had come up from London for peace and quiet but she has a very troubling secret past.

Another woman is found dead on the outskirts of Bletchley Park. She had been seen with a strange man at a local pub on several occasions. When a third body turns up dead in an expensive apartment in London, could it tie all three murders together?

With MI5 and MI6 bickering over England’s security, there is more at stake than rogue spies and dead bodies. Dilywn Knox and Alan Turing are about to turn the tide of the war in England’s favor with the help of the bombe, but not if these murders aren’t solved in time. The very outcome of World War 2 is at stake.
Read more
Other Formats: Paperback