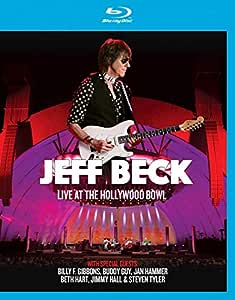 Format: Blu-ray
4.7 out of 5 stars 142 ratings
Available at a lower price from other sellers that may not offer free Prime shipping.

In the summer of 2016, Jeff Beck celebrated 50 years of his musical career with a special concert at the famous Hollywood Bowl. The setlist reached back to his first recordings with The Yardbirds in 1966 and came right up to date with tracks from his most recent album "Loud Hailer." As the evening progressed he was joined by many of the great musicians he has collaborated with over the years including Billy F. Gibbons, Buddy Guy, Jimmy Hall, Jan Hammer, Beth Hart and Steven Tyler. The show climaxed with the guests all joining forces for an exhilarating encore performance of "Purple Rain" in tribute to Prince, who had passed away a couple of months before the concert.

4.7 out of 5 stars
4.7 out of 5
142 global ratings
How are ratings calculated?
To calculate the overall star rating and percentage breakdown by star, we don’t use a simple average. Instead, our system considers things like how recent a review is and if the reviewer bought the item on Amazon. It also analyzes reviews to verify trustworthiness.
Top reviews

LV
3.0 out of 5 stars Jeff and his band are great, but the featured artists really bring the performance down
Reviewed in the United States on July 9, 2018
Verified Purchase
I've been a Jeff Beck fan since the Yardbird days, I also play guitar and he's been a huge influence in my style. Jeff is in top notch form as always on this DVD. As someone else mentioned, the real issue seems to be with the not so stellar vocalists. Rosie Bones is somewhat annoying to watch as she struts around in what looks like a prison jumpsuit and spends half the time sitting on the stage floor. I personally don't really care for Beth Hart's voice either, she's just not pleasant to listen to. Jimmy Hall was okay but lacks the depth a good singer has. Of all songs Billy Gibbons could have picked, they decided to do Rough Boy, yawn. They close it out with Purple Rain which is basically just Beth Hart screeching out the finale, it was terrible. Even though Jeff and his band were good, the surrounding acts make this a mediocre offering in general, but still worthwhile for a Beck fan to own. If you don't already have them, get the Jeff Beck Live in Tokyo or Jeff Beck Live at Ronnie Scott's, either of these will be a much more satisfying listen.
Read more
10 people found this helpful
Helpful
Comment Report abuse

lou scrobogna
VINE VOICE
5.0 out of 5 stars Jeff Beck : Live at the Hollywood Bowl .
Reviewed in the United States on July 8, 2018
Verified Purchase
In 2016 JB celebrated 50 Years of his musical carer with an Awesome live performance at the Hollywood Bowl with special guest musicians like Buddy Guy , Jan Hammer , Billy Gibbons , Jimmy Hall ,Wet Willy ,Beth Hart , Steven Tylor , R, Bones who I didn't know anything about except from YouTube music clips I never paid attention till now , great singer , the concert consist of 22 of JB's Rock & Blues Classics : from the Yarbirds to the last song a tribute to Prince's Purple Rain .
Read more
One person found this helpful
Helpful
Comment Report abuse

K. Baer
5.0 out of 5 stars Are you a fan of Jeff Beck.??? Then buy this today and be amazed... I did and am......
Reviewed in the United States on February 11, 2018
Verified Purchase
I have been a fan of Jeff Beck since 1970.. This Blu-ray is a must for anyone who loves and respects the body of work he has written, recorded and given to all of us..
Read more
3 people found this helpful
Helpful
Comment Report abuse

Adamdeus
5.0 out of 5 stars Jeff's Zenith!
Reviewed in the United States on January 12, 2018
Verified Purchase
He has never ceased to amaze. This is arguably his best career retrospective with inspirational partners in every corner.
Best guitar tone, along with the best guitar player. This one you should not miss; buy it now!

Ray
5.0 out of 5 stars Another Great Performance in My Home
Reviewed in the United States on September 10, 2020
Verified Purchase
Jeff Beck live recordings on blu-ray come alive on my A/V systems. Sound and performances are impressive.
Read more
Helpful
Comment Report abuse

Hilary.H
4.0 out of 5 stars Not quite vintage Beck
Reviewed in the United Kingdom on January 28, 2018
Verified Purchase
Okay, lets face it anything jeff Beck does is genius - however this outing falls slightly short of Jeff's performances on the 'live in Tokyo' & 'live at Ronnie Scotts' DVD's for me. The recording isnt as well executed and detailed as we have come to expect and lacks the punch and body that the afforementioned recordings offer on DVD and isnt as acomplished from a sound engineering and mastering point of view. Jeff doesnt quite let rip as he usually does which is probably down to all the guest performances, and he seems to lack some of the infectious confidence he normally exudes when he is on his own. The guest artists perform OK but some are a little lack lustre with the exception of Jan Hammer (and maybe Steve Tyler) being the best. All in all I did not really enjoy this quite so much as previous efforts but a special mention for great performances by Bad Ass bass player Rhonda Smith, and ace Drummer Jonathon Joseph who always give a stellar performance. If you are a Beck fanatic like me its a must buy, however anyone else would possibly be better served purchasing the Live in Tokyo or live at Ronnies Scotts DVD recordings which are in my opinion superior.
Read more
5 people found this helpful
Report abuse

JHJENSEN
4.0 out of 5 stars Rare fine guest appearances, setlist covers 50 years, but .... should be your 2nd or 3rd Jeff DVD
Reviewed in the United Kingdom on May 14, 2020
Verified Purchase
You should start with "Live in Tokyo" 2014 with a much similar band, but more nerve and sligthly better sound and a more breath taking performance and agile setlist. Then follows as no 2 "Live at Ronnie Scott's", like "Live in Tokyo" better shooting of pictures and more authencity and nerve, and in my opinion both has more typical or better Jeff Beck setlists. "Live at The Hollywood Bowl" is a must have for great fans of Jeff, and very interesting fine list of good guest performance and the final tribute to The Beatles and especially the last set with all top guests on stage giving a fine Jeff version of Prince Purple Rain is a highlight. Prince died shortly ahead of this 2016 concert. If even better sound, and more close up pictures and a little more nerve, the fifth star was given.
Read more
Report abuse

martinarnold59
5.0 out of 5 stars Great to see this although it was bitter sweet
Reviewed in the United Kingdom on January 12, 2018
Verified Purchase
Great show and even the newer stuff came across very well.The guest artists add to the power of the overall show. and I have watched it at least 4 times since purchasing it. This is a great companion to his other Blu ray disc recorded live in New York to celebrate Les Paul. Both worthy of 10 stars in my books.
Read more
Report abuse

Robert Grimes
4.0 out of 5 stars Excellent guitarist
Reviewed in the United Kingdom on February 22, 2019
Verified Purchase
Jeff Beck at his best, how does he make the guitar sound like that! A really good concert, well worth the money.
Read more
One person found this helpful
Report abuse
See all reviews