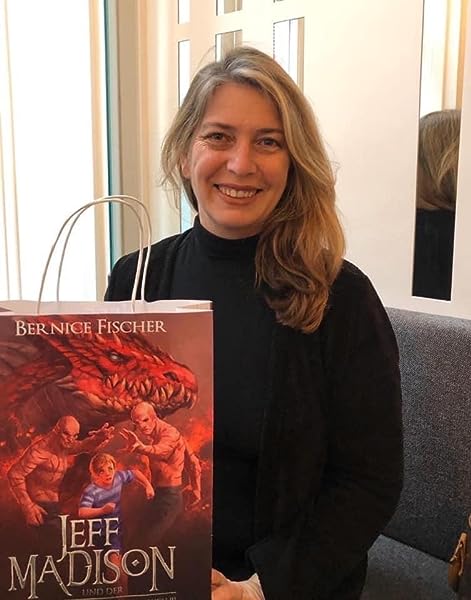 "A Plump and Perky Turkey" by Teresa Bateman
A witty and rhyming picture book about a clever turkey. | Learn more
click to open popover

"From the very first page the reader races off on an adventure filled with magic, scary creatures, and fierce warriors. It's a great pleasure to accompany Jeff and his gang on their wild ride. I rooted intensely for Jeff, and came to love him and his crew. Jeff Madison is a terrific roller coaster of a story with a bang-up, wonderfully satisfying ending."
James Thayer (Master Storyteller) Editor

This second instalment in the Jeff Madison Series is an action-packed nail-biter that will keep you hooked right to the very last page. With Shimmers of Drakmere, Bernice Fischer established herself as a name to watch on the fantasy scene for younger readers. But with Curse of Drakwood Forest, she has done what very few writers achieve, namely, writing a 2nd book that outshines its predecessor.
Maya Fowler-Sutherland - Editor

On their previous visit to Drakmere, Jeff's best friend Rhed, was adopted by a tree. While it seemed funny at the time, no one is laughing about it anymore, as Rhed's limbs stiffen and even his fingernails start turning to bark. Thanks to a Sandustian warrior, the friends discover that Rhed is being summoned to Drakmere by the Prince of Drakwood Forest. Listen to the call or not, Rhed is destined to turn into a tree. Jeff uses his dream catcher abilities to once again enter Drakmere. Of course his friends just don't listen when he tells them not to follow. This is where the adventure begins.

It has been said that you can always tell when an adventure is close by.
Just listen for the whisper of magic and the sizzle of excitement in the air,
take a deep breath and chase your dreams.

Bernice is a master of suspense, giving the reader just enough and then reeling them in again. She is a natural storyteller with a phenomenal imagination, a knack for dialogue and a most delicious, wicked sense of humour. Her characters shine. From the human to the magical, each character is absolutely alive - even those that qualify as The Living Dead!
Maya Fowler-Sutherland - Editor
Read more

Start reading Jeff Madison and the Curse of Drakwood Forest (Book 2) on your Kindle in under a minute.

DKAlpha
5.0 out of 5 stars Welcome Back To Drakmere
Reviewed in the United States on December 10, 2015
Verified Purchase
I just finished reading Jeff Madison And The Curse Of Darkwood Forest, excited to continue the adventure Bernice Fischer introduced us to in the first book in the series The Shimmers of Drakmere, yet nervous that like many series books the 2nd book would fall short. There is no need to worry with this series! Jeff Madison has a knack for finding his way into trouble and coming out looking like a hero! This fantasy book is fast moving, there is adventure on every page, and at the end you are torn between the let down that you've read the final word, but have the sense of hope that the ending hints that Jeff is going to be finding himself in the middle of another grand adventure soon enough.

Jeff Madison is the kind of guy a person wants as a friend, he's not going to turn his back on his friends for anything in the world, not even his own life. He's not the one that you call to bail you out of jail, he's the one that's going to be sitting next to you saying “yeah, but it was fun wasn't it?” This loyalty is what drives him back to Drakmere, desperate to find a cure for a mysterious curse visited upon his best friend Rhed. He didn't plan on Rhed or their friend Phoebe following him, that they would accidentally release a dreadful witch with the power to wake the un-dead, or that he would accidentally stumble into the castle which was supposedly impossible to find, and meet a warrior all but a few believed to be dead. These are just the tame parts of this story!

I am once again blown away by the caliber of writing this book displays, and the world Fischer has created that can easily go toe to toe with the likes of Narnia or Middle Earth. Characters come alive, the scene is set splendidly, and you will not be able to set this book down once you start reading it.
Read more
2 people found this helpful
Helpful
Comment Report abuse

Tom Chandler
5.0 out of 5 stars Exhilarating and funny with expectation to be awed
Reviewed in the United States on January 8, 2016
Verified Purchase
I was fortunate to get this book on pre-order. Having read the first book, I could not resist from buying the sequel to the Jeff Madison story. The book is more intriguing with multiple story lines or plots happening at the same time. Jeff Madison is no longer the naive boy that we have been introduced to. He is now a practicing 'dream-catcher' and leads his way as children usually do. The best thing I love about reading this book is the funny moments. "Over?." as well as the new characters both good and evil. It has been a real page turner, and I would recommend reading it in one go! Recommended for both young adults, children and pretty much grown-up adults too. I suspect the third upcoming sequel to be very dark.
Read more
One person found this helpful
Helpful
Comment Report abuse

Angelene Kitchener
5.0 out of 5 stars Another exciting adventure
Reviewed in the United States on January 26, 2016
Verified Purchase
Rhed is in trouble in this book and the only solution for Jeff is to once more to face the unexpected surprises and dangers of Drakmere. I just love the characters that Bernice Fischer has created and keeps evolving my favourite characters from chapter to chapter. Angie was her usual if not more wacky self and is a real hand full in this adventure. I literally cried with laughter at her antics. She had me completing my sentences with “over” for days.  The broom has his own personality and is just wonderful and I perfectly understand Angie’s attachment to her broom.  Jeff has some really cunning solutions to torment the evil Wiedzma and showed that even on his own he is a force to be reckoned with… I loved the warrior fight scene’s which were so intense and described so well that I felt as if I should be ducking and diving. As in book 1, there is a Dragon and who does not love a Dragon? Watroc, the Dragon in this book is moody, grumpy and constantly hungry and just loves the evil Shadowraiths with a pinch of lemon… tastes like Oysters he says – hilarious. Not only does Rhed join Jeff in the latest quest but this time they take their young friend Phoebe with them with hilarious and yet frightening escapades. I was laughing the one moment and biting my nails in the next. Fischer has the ability to transport the reader into a magical fantasy ride, the way she writes makes the reader feel as if they are part of the adventure, you can almost smell and hear what the characters are experiencing. A great read… I cannot wait for the next book, and I know that there is one coming because…. well you read Jeff Madison and the Curse of Drakwood Forest and find out. Over.
Read more
One person found this helpful
Helpful
Comment Report abuse

Jason M. Hubbard
3.0 out of 5 stars Not one but TWO dragons!!!
Reviewed in the United States on March 2, 2017
Verified Purchase
The first installment was a little off-putting because the zany humor flew over my head since the conflict was so dire. Since I knew what to expect in the second installment, I liked it better than the first. It's a multi-layered story that gets the job done, although there are moments of plot convenience and some over-powered characters (a witch who could win a war with her pinkie finger). A good choice for people who like plenty of humor in their fantasy tales.
Read more
Helpful
Comment Report abuse

Cindy
5.0 out of 5 stars I recommend this book to anyone who loves fantasy
Reviewed in the United States on December 21, 2015
Verified Purchase
This book has everything, dragons, witches, fierce warriors, spells, magic, enchanted castles, an animated broom and funny clever kids. Jeff goes into a magical kingdom to find a cure for his friend Rhed. Before he knows it, his friends have followed him and now he has to keep them from turning into a tree or been captured by an evil witch. I loved the broom that has its own personality and keeps hitting Jeff on the ankle, or the dragon that is always hungry. I recommend this book to anyone who loves fantasy.
Read more
One person found this helpful
Helpful
Comment Report abuse

Dietfried
5.0 out of 5 stars A plot that just keeps things popping
Reviewed in the United States on December 20, 2015
Verified Purchase
Best fantasy book I have read in a while, it had everything, humor, suspense and action. It’s an easy read for both teens and adults with wonderful characters and a plot that just keeps things popping. I recommend this book if you want to get lost in a fantasy adventure story.
Read more
2 people found this helpful
Helpful
Comment Report abuse