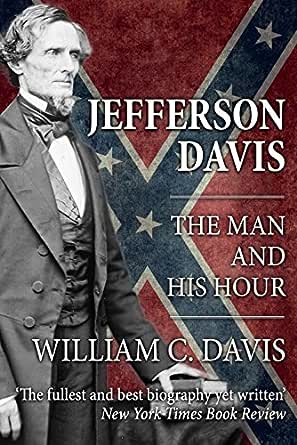 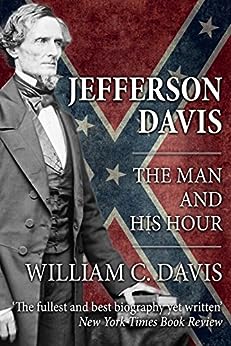 Jefferson Davis: The Man and His Hour Kindle Edition

This portrait puts the emphasis on Davis's private warmth, public coolness, personal insecurity and indecisiveness during the Civil War. Relying mostly on contemporary sources, the author ( Image of the War ) explores how Davis's attitudes and values were developed at West Point and during his Mexican War service and how they were put to the test in his years as U.S. senator, as secretary of war under Franklin Pierce and as president of the Southern Confederacy. The author defends Davis (1808-1889) against the charge that he interfered with his generals, partly by showing how well he and Robert E. Lee worked together. The book also makes clear that Davis lacked managerial skill, was inflexible, could not admit making a mistake and had great difficulty delegating authority. Nevertheless, as the author points out, Davis built the systems that kept the Confederacy afloat from his inauguration in 1862 until he was captured by Union troops in 1865. This is a pragmatic but sympathetic biography that explains why Davis was respected but never loved by the citizens of the Confederate states. Illustrated.
Copyright 1991 Reed Business Information, Inc. --This text refers to an out of print or unavailable edition of this title.

Noted Civil War author Davis now tries his hand at Jefferson Davis, long an enigma to historians. He approaches his subject sympathetically, grounding his book in the quaint notion that the Confederacy was doomed to fail (something neither Jefferson Davis in his day nor most historians today would accept) and viewing events largely through Davis's eyes. The author gives us the public man. He distills the private Davis into a few remarkably perceptive pages (the best in the book), preferring to measure his subject solely by the Civil War standard. Davis comes off as dogged and courageous, but also politically inept and narrowminded. Davis lost the West and his political bearings, though never his conviction for the cause. This new biography supersedes Clement Eaton's Jefferson Davis ( LJ 10/1/77) in verve and detail, but it offers no striking new profile of either the man or his hour. Recommended for university and major public libraries.
- Randall M. Miller, St. Joseph's Univ., Philadelphia
Copyright 1991 Reed Business Information, Inc. --This text refers to an out of print or unavailable edition of this title.

A fine, objective portrait in paradox, shrewdly detailing how Jefferson Davis's character flaws rendered him woefully unsuited to be President of the Confederacy. The author (no relation to his subject) brings to bear the military acumen one might expect from a former editor of Civil War Times Illustrated and author of more than 25 books on the Civil War and southern history, including Duel Between the First Ironclads and The Battle of New Market (both 1975). Yet his discussion of strategy is also informed by a firm grasp of Davis's extremes of character. It seemed logical in 1861 that the South would turn to Davis. He was, after all, its major military hero (as a colonel in the Mexican War, he helped win the Battle of Buena Vista); the natural successor to John Calhoun as the Senate's chief States'- rights advocate; and, under President Franklin Pierce, one of the most innovative secretaries of war ever. Yet, as early as his two courts-martial while a West Point cadet and army lieutenant, Davis manifested negative traits that proved fatal as a chief executive: anger, pedantry, vanity, indecision, and, as his future second wife noted after their very first meeting, an overbearing ``way of taking for granted that everybody agrees with him.'' He had the diligence and intelligence of a bureaucrat, but none of the interpersonal skills of a politician. Author Davis examines how these strengths and weaknesses affected the Confederate leader's relationships with his strong-willed second wife, Varina, and his mentor, brother Joseph; his unusually benevolent treatment of slaves; and his mismanagement of the western theater of operations, aggravated by petty squabbling with Generals Pierre Beauregard and Joseph Johnstone and foolish loyalty to incompetents like Braxton Bragg and Leonidas Polk. A dispassionate, well-researched, and skillful biography of a complex and controversial figure. (Sixteen pages of b&w illustrations--not seen.) -- Copyright ©1991, Kirkus Associates, LP. All rights reserved. --This text refers to an out of print or unavailable edition of this title.
Read more

B. Oneil
4.0 out of 5 stars Comprehensive history
Reviewed in the United States on July 12, 2018
Verified Purchase
You'll get your money's worth from this book. It's long, and amazingly comprehensive as to the man himself and other players, both major and minor. It takes awhile to read, but it was worth it. It can be a bit dry and academic at times, but I didn't feel the need to skip any passages. It's also a good psychological analysis in a modern sense about Davis's personality and quirks. So many names pass by in the book, that I supplemented my reading by looking up online pictures of the people involved, which gave me visual help to enhance my reading.
Read more
7 people found this helpful
Helpful
Comment Report abuse

Charles E Dyer
1.0 out of 5 stars William Davis thinks he is a trained psychologist
Reviewed in the United States on November 14, 2018
Verified Purchase
This book was a major disappointment.The book was reasonably objective during most of the book.The last chapter,where Davis let his true feelings run wild was appalling.W Davis subjected J Davis to his grossly unfair psychological analysis.He posited that J Davis was a highly insecure man ,because his father was old enough to be his grandfather and showed him little emotion.Perched on his pseudo therapist chair W Davis plays the amateur psychologist poorly.He continues that Davis could not make major decisions and stick to them,J Davis made a multitude of decisions and was resolute (some felt too much so).A much superior book is William Cooper's biography.
Read more
5 people found this helpful
Helpful
Comment Report abuse

Thomas M.
5.0 out of 5 stars Excellent
Reviewed in the United States on January 8, 2020
Verified Purchase
I had wanted to learn about what kind of man would lead an effort to take up arms against the government. After reading this book, now I know: someone who always believes that he knows everything and is right about everything, and everyone who disagrees is wrong. In other words, a fanatic. The book was excellent.
Read more
2 people found this helpful
Helpful
Comment Report abuse

jimmy
1.0 out of 5 stars Mostly based on what author thinks happened in Davis' life and a few true facts.
Reviewed in the United States on November 25, 2017
Verified Purchase
Very poorly written wth many run on sentences. And certainly much of what is written is conjecture by the author but he does cover this by writing Davis could have, would have, might have or should have. Well you get the picture. I certainly don't expect nor should the author have guessed what Davis did every day from birth. Nor am I interested in what the author thinks or believes might have happened in Davis' life. In short it gave me a headache.
Read more
2 people found this helpful
Helpful
Comment Report abuse

Rosalia Hoffman
5.0 out of 5 stars Thorough biography of davis' life
Reviewed in the United States on April 25, 2018
Verified Purchase
The book was well written in an easy to read style, something important to me. The author presents the facts of davis' life without trying to force a judgement on the man or make him feel like some emotionless being like several other more recent authors. Jefferson Davis' story is told complete with all the humanizing elements.
Read more
4 people found this helpful
Helpful
Comment Report abuse

Amazon Customer
5.0 out of 5 stars Enjoyable
Reviewed in the United States on July 11, 2017
Verified Purchase
Enjoyed reading about the one and only Confederate President and his life before, during, and after the civil war.
Read more
2 people found this helpful
Helpful
Comment Report abuse
See all reviews

John Grant
3.0 out of 5 stars Amazing story buried in facts
Reviewed in the United Kingdom on October 15, 2017
Verified Purchase
This is an over-written biography. I had to force myself to finish it. The final chapter whch is a summation is the most enjoyable. I wish the author had discovered his narrative flow and editing pencil 900 pages earlier. Like most Americans. I knew next to nothing about Jefferson Davis and was surprised to learn what a remarkable character he was. This biography contains surprising facts that changed my view of not only the Civil War but many major events of the 19th century. Ideally, the pubisher will produce an abridged version for the general reader. Jefferson Davis deserves to be remembered and celebrated. If you are a Civil War buff or doing a thesis on Davis this book is for you. If, like me, you are a general reader then beware.
Read more
Report abuse

Kindle Customer
3.0 out of 5 stars Dead End Jeff
Reviewed in Canada on December 18, 2017
Verified Purchase
For me not an American, this was too much about someone who went nowhere and did not have the intelligence to know that the North HAD to win. To base an economy on mining cotton with slave labor was stupidity, in my view and in view of the industrialization of the North. They were blinded by the illusion of a gentle society it gave them.