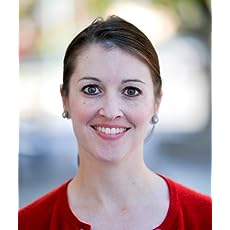 In 2011, her novel The Cherbourg Jewels won the Romance Writers of America Kiss of Death Chapter's Daphne du Maurier Award for Excellence in Category Romantic Suspense. In 2016, she placed as a runner-up in the Chicago Tribune's Nelson Algren awards for short fiction. Her work has also appeared in the Portland Review, Gargoyle, and the Sacramento News & Review.

She's worked as a web editor, a copywriter, and a USAID grant program coordinator, which gave her the opportunity to travel to Kenya. When she's not writing, she enjoys running, genealogy, and blogging about tiaras. She lives in Pilot Hill, California and has not yet struck gold in her backyard.
Read more 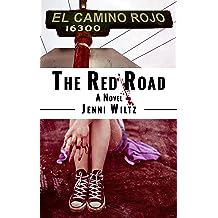 A father's love. A family's tragedy. A daughter's revenge.

Honor student Emma knows more about galvanic cell diagrams than guns. College is the only way out of her gang-ridden hometown, but her parents can't afford it.

When her unemployed dad lands a job as a census taker, things start looking up. But he's sent deep into East Malo Verde, where gang members rule the streets and fear anyone with a badge who knocks on doors. One night, a gang member mistakes him for a cop and beats him savagely, leaving him for dead.

Her best friends, her chem lab partner, her mom, and the detective assigned to the case all try to convince her to focus on school. But school won't prepare her for a world that ignores a crime against a good man. Emma must decide what's more important: doing what's expected, or doing what she feels is right . . . even if it leads her down a dark and dangerous path of revenge.

The Red Road is about a girl in turmoil, coming of age as she discovers the depths - and the limits - of friendship, first love, and the bond between parents and their children. 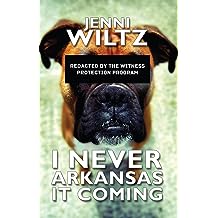 Brett Sargent isn't adapting to life in Arkansas very well. A native New Yorker, she's been whisked away to Little Falls via the Witness Protection Program after testifying against her former high school lab partner, now a Mafia up-and-comer. Despite her new name, new house, and new career as a bookstore owner, she can’t find a decent Thai restaurant—or anyone who wants to buy books. Her only companion is a happy-go-lucky guard dog named Dude.

While moonlighting as a detective to pay the rent, Brett is hired by Elaine Scrubbs and her smokin’ hot redneck brother, Jake, who ask her to find Elaine’s missing husband. But when Hank Scrubbs turns up dead with a Mafia calling card stabbed to his chest, Brett knows she's next on their hit list.

To stay alive, Brett and Dude will have to tangle with a liar, a truck driver, a flesh-eating Mafia lawyer, a one-eyed repairman, a shotgun-wielding racist, a vindictive Kroger clerk, a Bible thumper, and a shoplifter named Rick James who just might be the best friend Brett’s been waiting for.

A fast-paced comic mystery, I Never Arkansas It Coming takes one private investigator for the ride of her life in a place she never wanted to call home.
Read more
Other Formats: Paperback 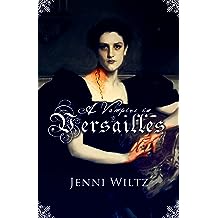 Jean-Gabriel de Bourbon is a vampire, brother of the first King of France. An ancient curse and his brother's treachery have linked his survival to the monarchy itself. As long as a king sits on the throne of France, he remains alive.

Marguerite de Clermont-Prince is an orphan and heiress in the court of Louis XVI. She dreams of a life on the stage, where she can escape the fortune hunters who prowl the halls of Versailles...especially Etienne, brother of the king's troublemaking cousin, Louis-Philippe d'Orleans.

When an accident gives Jean-Gabriel a taste of Marguerite's blood, they discover that it carries her thoughts and emotions to him, even when they're apart. This mystical attraction proves difficult to resist, even as a jealous Etienne manipulates Louis-Philippe d'Orleans and Louis XVI to keep the lovers apart. But Etienne's actions only bring the revolution closer, endangering everyone and everything they love. To survive, Jean-Gabriel and Marguerite face duels, assassins, marriages, murders, revolution, and an immortal evil that lurks at the heart of the French monarchy.

Combining paranormal romance and historical fiction, A Vampire in Versailles is a dark fantasy that pits an immortal creature against a force even greater than his own: destiny.
Read more
Other Formats: Paperback 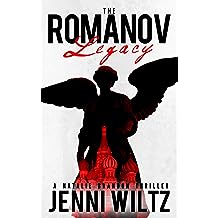 Natalie Brandon knows Nicholas II, last tsar of Russia, left a secret bank account to provide for his family in exile. But getting someone to believe her is harder than finding the account itself. Diagnosed with schizophrenia, Natalie is tormented by a recurring hallucination, the voice of an angel named Belial. Even her sister, a Russian history professor, won’t take her seriously…until a blond, blue-eyed Russian spy kidnaps Natalie, claiming she’s the only one who can lead him to the treasure.

But Constantine Dashkov isn’t the only one after the tsar’s missing millions. Russian prime minister Maxim Starinov will do anything to get the money for himself. Natalie and Constantine must outrun Starinov’s death squad as they track the treasure from San Francisco to Moscow to London. With nothing more than Natalie’s ghostly intuition to guide them, can she and Constantine stay alive long enough to protect the tsar’s legacy from a greedy despot?

The Romanov Legacy is the first book in the Natalie Brandon thriller series, with fast-paced action and a heroine readers call "unforgettable" and "enchanting." If you like Dan Brown’s historical puzzles and the international intrigue of Daniel Silva, then you'll love Jenni Wiltz's page-turning thrillers. 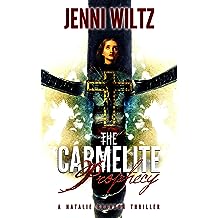 When Natalie Brandon joins her sister Beth in Paris, the past comes alive...and no one escapes unscathed. Diagnosed with schizophrenia, Natalie hears a recurring hallucination, the voice of an angel named Belial. When he guides her to the church of Saint-Joseph-des-Carmes, Natalie stumbles on two deadly secrets: a family connection to the massacre that took place there during the French Revolution, and a long-lost relic buried deep within its walls.

But Natalie isn't the only one who knows about the relic. An ultra-nationalist French professor steeped in medieval warfare and a former Legionnaire have joined forces to claim the relic and launch an uprising that will end in blood and fire on France's streets. Can Natalie and Beth stay alive long enough to save the relic and stop the next French revolution?

The Carmelite Prophecy is the third book in the Natalie Brandon thriller series, with fast-paced action and a heroine readers call "unforgettable" and "enchanting." If you like Dan Brown’s historical puzzles and the international intrigue of Daniel Silva, then you'll love Jenni Wiltz's page-turning thrillers. 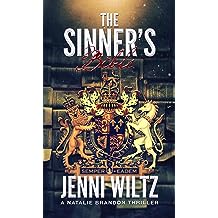 Natalie Brandon doesn't believe in curses - except the one afflicting her. Diagnosed with schizophrenia, she's tormented by a recurring hallucination - the voice of an angel named Belial. When her boss acquires a copy of the rare 1631 Sinners' Bible, Belial tells her that the book is linked to the tragic Stuart dynasty - and the curse that brought it down.

Natalie doesn't believe it until the public unveiling of the book goes horribly awry. A pair of thieves take Natalie, her sister, and her boss hostage. When Belial orders her to keep the thieves from stealing the Sinners' Bible, Natalie knows it's because he wants to unleash the curse once more. Will she stop the thieves or will she stop Belial? No matter which choice she makes, someone will die.

The Sinner's Bible is a stand-alone novella in the Natalie Brandon thriller series, with a heroine readers call "unforgettable" and "enchanting." If you like Dan Brown’s historical puzzles and the supernatural suspense of Robert Masello, then you'll love Jenni Wiltz's page-turning thrillers. 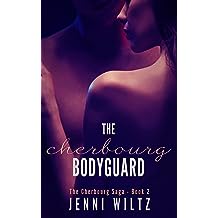 The Cherbourg Bodyguard (The Cherbourg Saga Book 2) Nov 4, 2016
by Jenni Wiltz
$2.99
A passion sparked by danger. A feud that could tear a family apart.

Honorée Cherbourg knows no good deed goes unpunished. When she saves a young boy's life in Paris, she nearly loses her own - and gets tossed into protective custody while police track the would-be killer. Her protector is the boy's father, policeman Adrien Gerard. As if facing a killer weren't bad enough, now she's cooped up with the sexiest man she's ever met.

Adrien Gerard knows good things come to those who wait. In this case, the chance to arrest the man who tried to kidnap his son, Collin. But the investigation is about to be derailed by his uncontrollable attraction to Honorée, the only person who can identify the killer.

Honorée isn't used to putting down roots. But she can't deny her unexpected bond with Collin, and her unbridled attraction to Adrien. When the kidnapper surfaces again, revealing a connection that strikes at the heart of the Gerard family, she's forced to make a choice between her freedom and the new family she never knew she wanted.

Can Honorée and Adrien keep Collin safe and catch a kidnapper...or will their forbidden passion destroy everything the Gerard family holds dear?

Combining romance, mystery, and suspense, The Cherbourg Bodyguard is the second book in the Cherbourg series. You met Honorée's brother, Sébastien, in The Cherbourg Jewels. Honorée's story is about a woman searching for a home and a family in danger. Can they survive long enough to find their happily ever after?
Read more
Other Formats: Paperback 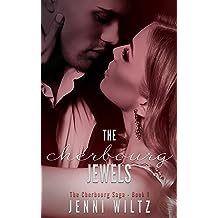 Ella Wilcox wants one thing and one thing only—to find the men who murdered her father, antique jewelry restorer Frederick Wilcox. As eight-year-old Ella cradled her dying father’s body, she vowed to take her revenge. With only a handful of photographs documenting her father’s stolen gems, Ella uses her skills as a gem historian to access the vaults of the rich and powerful. If only she could peek inside the most spectacular vault of all—the one belonging to the impossibly wealthy Cherbourg family...

Sébastien Cherbourg IV wants one thing and one thing only—to regain his place at the head of his family’s empire. After a public split with a gold-digging fiancée, Sébastien’s family has lost confidence in his decisions. To earn their respect once more, he’s arranged a magnificent exhibition of his family’s legendary jewel collection. Unfortunately for him, Ella is the only woman who can sign off on the insurance paperwork.

Ella knows the Cherbourg jewels contain the answers she’s looking for. Sébastien knows he’ll stop at nothing to keep his exhibition on schedule. But when someone steals the gems right out from under them, Ella and Sébastien are thrown together in a desperate race to catch a thief. But this thief has secrets—secrets worth killing to protect.

As danger ignites their uncontrollable passion, Ella and Sébastien discover that nothing is what it seems. A family’s deadly heritage is revealed. A trusted friend becomes a traitor. And a dangerous secret threatens to shatter any chance they have for happiness together...

Combining romance, mystery, and suspense, The Cherbourg Jewels introduces a family who has everything...and the woman who has the power to take it all away.
Read more
Other Formats: Paperback