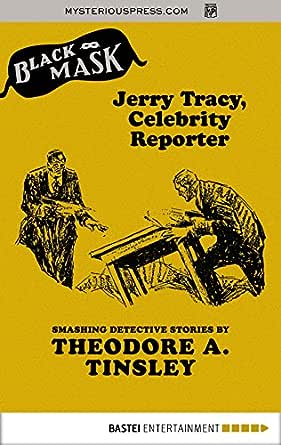 This title is not currently available for purchase
You've subscribed to Black Mask! We will preorder your items within 24 hours of when they become available. When new books are released, we'll charge your default payment method for the lowest price available during the pre-order period.
Update your device or payment method, cancel individual pre-orders or your subscription at
Your Memberships & Subscriptions
There was an error. We were unable to process your subscription due to an error. Please refresh and try again.
Share 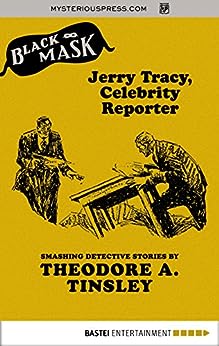 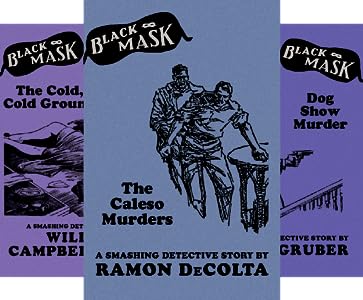 Theodore A. Tinsley (1894–1979) was a prolific noir author who wrote for all of the prominent pulp magazines, including Black Mask, Munsey’s Magazine, All Detective Magazine, and Action Stories. His best-known creations are Carrie Cashin, a private eye who became pulp fiction’s most popular female character, and Jerry Tracy, a gossip reporter with a nose for sniffing out murders.
--This text refers to an alternate kindle_edition edition.

Christopher (o.d.c.)
5.0 out of 5 stars What he said- fantastic collection
Reviewed in the United States on October 21, 2013
Verified Purchase
Upon reading Mr Lewis's fine review, I purchased this immediately, and my review can only echo what he said. This is a dream find for lovers of the hard-boiled; 1,000+ pages of Depression-era demi-monde. The prose is colloquial with lots of 30s slang that seems the opposite of stale (with quite a few blanks for oaths and curses), the situations are gritty, and the characters, Jerry and Butch, and McNulty the Chinese manservant, and a plethora of wise dames are all well-drawn.
There are a few typos- "on the chair was a drew (dress?), a girdle, and stockings," "a sob'd, (solid?) plainclothes veteran with six kids and a million friends..," et al- these from the best story (so far!) "Park Avenue.." Like Mr Lewis, I don't intend to gobble these stories down; but I do want to say ditto.
Read more
5 people found this helpful
Helpful
Comment Report abuse

GA Russell
3.0 out of 5 stars Jerry Tracy
Reviewed in the United States on August 14, 2019
Verified Purchase
933 pages of whodunits. The writing isn't very good. The recurring characters are no more developed at the end than they were at the beginning. These stories would be fully appreciated by intelligent sixteen-year-olds.
Read more
Helpful
Comment Report abuse

Gregory S. Martinez
4.0 out of 5 stars Jerry Tracy is worth checking out.
Reviewed in the United States on July 12, 2014
Verified Purchase
While I do not love Tinsley as much as I do the cream of the Black Mask boys (Hammett and Chandler) he is an entertaining writer. These are not ingeniously plotted yarns. What I think I like most is the rich and colorful slang in the dialogue. Some of the things the characters say are remarkable.
Read more
2 people found this helpful
Helpful
Comment Report abuse

Evan Lewis
5.0 out of 5 stars A THOUSAND PAGES OF HARDBOILED ENTERTAINMENT
Reviewed in the United States on August 27, 2013
Theodore Tinsley's Jerry Tracy was a regular in BLACK MASK, rubbing elbows with characters like Frederick Nebel's MacBride and Kennedy, George Harmon Coxe's Flash Casey and Paul Cain's Gerry Kells. He starred in 25 stories between 1932 and 1940, and every one of them - in chronological order - appears in this massive eBook. Best of all, these are great stories, hardboiled and tough, but packed with wit and humor.

Prior to this, I knew Theodore Tinsley only as the author of several Shadow novels, written as "Maxwell Grant" while Walter Gibson was out to lunch. This collection is a real eye-opener, showing Tinsley to be an extremely gifted storyteller - with a unique and quirky style.

Our hero, Jerry Tracy, is a smart-mouthed columnist who dishes the dirt on Broadway for his newspaper the Daily Planet. Yep, the Daily Planet, and this series began in 1932, six years before the first appearance of Superman.

Though the Jerry Tracy stories are told in third person, this is extremely close third person, so we're often privy to Tracy's thoughts. It was a shocker for me to discover that Tracy's thoughts read like a cross between the narration of Robert Leslie Bellem's Dan Turner and Richard Sale's Daffy Dill. Now that's entertainment. Jerry Tracy displays his quirky personality in his spoken dialogue, too, addressing everyone as "Bum," employing the universal greeting "Hawzit," and being generally inventive with the English language.

The dialogue makes the stories fun, but it's the stories themselves that pack the real punch. While Bellem's Dan Turner stories are all style and no substance, these Tracy tales are the real deal. I haven't had time to read all 25 stories (that will take a while), but those I've finished have heart and meaning, and even manage to comment on the human condition. In mystery stories from the thirties, that's saying a lot - even for stories that appeared in BLACK MASK.

JERRY TRACY, CELEBRITY REPORTER may seem high-priced for an eBook, but it's actually a bargain. If this were a print volume, it would run over 1000 pages, and this is quality stuff. The 25 stories are presented in chronological order, following Tracy's eight-year run from start to finish. Outside of dishing out thousands for the original magazines, there's no way we'd ever be able to read this series. Thank you Mysterious Press, Open Road and Keith Deutsch!
Read more
12 people found this helpful
Helpful
Comment Report abuse

Pop Bop
TOP 100 REVIEWER
4.0 out of 5 stars An Eye-Opening, Rewarding Treat
Reviewed in the United States on April 12, 2014
Start with the Introduction by Boris Dralyuk. It gives you a nice biographical snapshot of Theodore Tinsley and sets the Jerry Tracy stories within Tinsley's larger body of work, and that work in its historical context. If you aren't already revved up the intro will certainly get you jazzed to follow Tracy as he drinks, brawls, loves and reports his way into and back out of the rotten core of the Big Apple.

This is the real stuff, published between 1932 and 1940. This is not pretend noir or nouveau noir or a noir "homage". I tip my hat to modern authors who honor that work, but you have to read some of the original work if you want to understand and appreciate the modern version, and you should read the original work anyway just for the shear joy of it. This is high octane, muscular, rat-a-tat, caffeinated and twitchy urban noir at its best. And, not only do you get atmosphere, banter, sharp dialogue and a look at a long vanished American past - you get a hero with substance and a sophisticated code of conduct as complex, dark and yet honorable as any comparable American tough guy hero. In many ways Jerry Tracy is the template that many later authors would follow and on which they would elaborate and improvise. (Anyway, Tracy worked as a columnist for the "Daily Planet" six years before Superman was even a gleam in Jor-El's eye. That counts for something.)

Please note that I received a free ecopy of this book in exchange for a candid review. Apart from that I have no connection at all to the rights holder or the publisher of this book.
Read more
6 people found this helpful
Helpful
Comment Report abuse
See all reviews