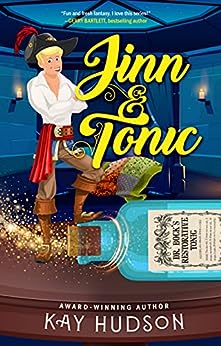 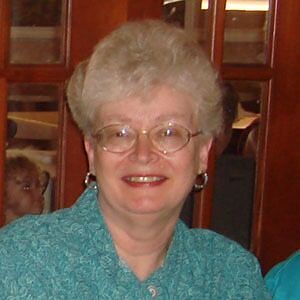 by Kay Hudson (Author) Format: Kindle Edition
Book 1 of 1: Pandamonia
See all formats and editions
Sorry, there was a problem loading this page. Try again.

Mix two lonely mortals, two meddlesome jinn, and a collection of classic Errol Flynn adventure films, and you have the ingredients for pandemonium.

Sheridan has her doubts about Bock, the jinn who pops out of her antique tonic bottle. But she loves the vividly real dream worlds he builds after watching her favorite movies.

Then she discovers that the hero of her dreams, dashing pirate captain Rob Flynn, is also a mortal dreamer, as real as she is.

Rob wants to meet in the waking world, but Susan resists. It's bad enough that he's a lawyer and she's on parole. It's even worse that she tied him to her bed and had her way with him in a dream they both remember.

Their dream adventures carry them through the pirate world of Captain Blood, the saloons of Dodge City, and Robin Hood's Nottingham Castle. Can Susan and Rob risk their hearts to find love as well as their mortal lives to defeat the evil jinn whose ambitions would separate them forever? 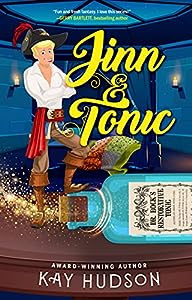 Kay has been writing as long as she can remember, beginning with fan fiction (not that anyone used that term at the time) based on long-forgotten TV shows when she was in elementary school.

In high school she advanced to research papers, including one on the French actress Sarah Bernhardt, perhaps because of her father’s tendency to call her Sarah Heartburn in her more dramatic moments.

College and graduate school brought research in anthropology and archeology, followed by many years of writing archeological survey reports and contributing archeological and historical background sections for environmental impact reports. This work taught her, among other things, that the Army Corps of Engineers is not an organization with a strong appreciation of humor.

After the death of her husband (and research partner) in 2002, Kay found work sitting in front of a computer and playing with numbers instead of words. Happily, the owner of the small bookkeeping service where she balances other people’s chaotic bank accounts and illegible check registers is her long-time friend and RWA sister, Jo Anne Banker.

Kay is active in the Houston Bay Area and West Houston chapters of Romance Writers of America®, and is a four-time finalist in RWA’s Golden Heart® contest. She works on story plots on the freeway while commuting from her home between Galveston Bay and NASA to her job in Houston. She recently lost her housemate Nutmeg, a large, rather matronly cat who was rescued from a storm drain by the wonderful people who work with Second Chance Pets.

Love2Read
5.0 out of 5 stars Delightful, Fun Fantasy Romance!
Reviewed in the United States 🇺🇸 on May 14, 2021
Verified Purchase
I found Jinn and Tonic thoroughly delightful! Bock, the jinn from a tonic bottle, is able to create worlds in Pandamonia where dreamers can participate in elaborate stories he sets up. It's in a Caribbean pirate dream that mortals Rob and Susan meet and fall for each other--at least until the pirate ship they're on blows up and they wake each in their own beds. Meanwhile, Bock is trying to protect his jinn girlfriend from an evil nightmare jinn. And nothing goes at all as planned.

Both couples are charming and quirky while the story is fun and original. I highly recommend this book to anyone who loves humorous paranormal romance!
Read more
4 people found this helpful
Helpful
Report abuse

Shari Heinrich
5.0 out of 5 stars A romance filled with belly-laughs
Reviewed in the United States 🇺🇸 on June 8, 2021
Verified Purchase
Such a delightful tale, merging fantasy with romance seamlessly, and having not one, but TWO romance arcs. Hudson takes me into the Jinns' worlds, filled with adventure, fantasy, and a villain worthy of fear. The deeper I got in the book, the more I worried about the decisions Rob & Susan made, even as I laughed at the situations they got themselves into, and out of. I loved the use of old-time movies as the inspiration for the Jinn worlds/dreams. A fast read.
Read more
One person found this helpful
Helpful
Report abuse

Lives2read
5.0 out of 5 stars A Clever, Fun, Refreshing Read
Reviewed in the United States 🇺🇸 on June 3, 2021
Verified Purchase
Clever, fun, and original, Jinn & Tonic was a breath of fresh air--a witty, romantic, and very original new twist on the old "genie in a bottle" story. I'm not normally a reader of paranormal romance, but I was immediately drawn in by Ms. Hudson's smooth, smart, and very readable prose, and the Kindle edition is refreshingly error-free. Thanks for a great read that had me chuckling! I look forward to visiting Pandamonia again soon!
Read more
One person found this helpful
Helpful
Report abuse

Jan Crow
5.0 out of 5 stars Adventurous romp
Reviewed in the United States 🇺🇸 on September 21, 2021
Verified Purchase
Thoroughly enjoyed this dreamy tale. References to favorite movies of long ago made this even better. Grab a comfortable chair and a beverage and go along for the ride.
Read more
Helpful
Report abuse

Gimme More Books
5.0 out of 5 stars Fun and original story
Reviewed in the United States 🇺🇸 on May 21, 2021
Verified Purchase
Absolutely loved this gem of a novel! Imaginative, witty and an unusual premise, which has made me look at my own dreams in a completely different light. I'm intrigued at the surprise twist at the end and if that means there are more books coming tackling Pandemonia. Highly recommend this fun novel to all!
Read more
One person found this helpful
Helpful
Report abuse

PHeid
5.0 out of 5 stars A real gem
Reviewed in the United States 🇺🇸 on May 19, 2021
Verified Purchase
For this fan of the old "I Dream of Jeannie" TV series Jinn and Tonic is a really fun read. So imaginative. Puts a new spin on finding the man/woman of your dreams.
Read more
Helpful
Report abuse

E. Lloyd
5.0 out of 5 stars Fun! Charming! Can't wait for more in the series!
Reviewed in the United States 🇺🇸 on May 21, 2021
Verified Purchase
This story was so enjoyable! I loved the characters and the writer's "voice." I laughed more than once (something I rarely do when reading.) I'm really looking forward to book 2.
Read more
Helpful
Report abuse

Diane Kelly
5.0 out of 5 stars Fun and Funny Romantic Romp!
Reviewed in the United States 🇺🇸 on May 16, 2021
Verified Purchase
I enjoyed every word of Jinn & Tonic! With fun humor, a couple you'll root for, and a well-crafted and unique storyline, this book is an absolute treasure.
Read more
2 people found this helpful
Helpful
Report abuse
See all reviews

J. Read
5.0 out of 5 stars A perfectly woven romance adventure with humor and heart
Reviewed in Canada 🇨🇦 on June 23, 2021
Verified Purchase
I loved the real world and the dream world (with classic Errol Flynn movie settings) in this story! I also loved the two couples, human and jinn, who had individual as well as shared challenges to overcome. Susan Sheridan and Rob Flynn are a perfect match—and so are bold Bock and plucky Emmie. There's so much going on in this story, but it all fits seamlessly together. This is a perfectly woven romance adventure with humor and heart.
Read more
Report abuse
See all reviews
Report an issue
Does this item contain inappropriate content?
Report
Do you believe that this item violates a copyright?
Report
Does this item contain quality or formatting issues?
Report