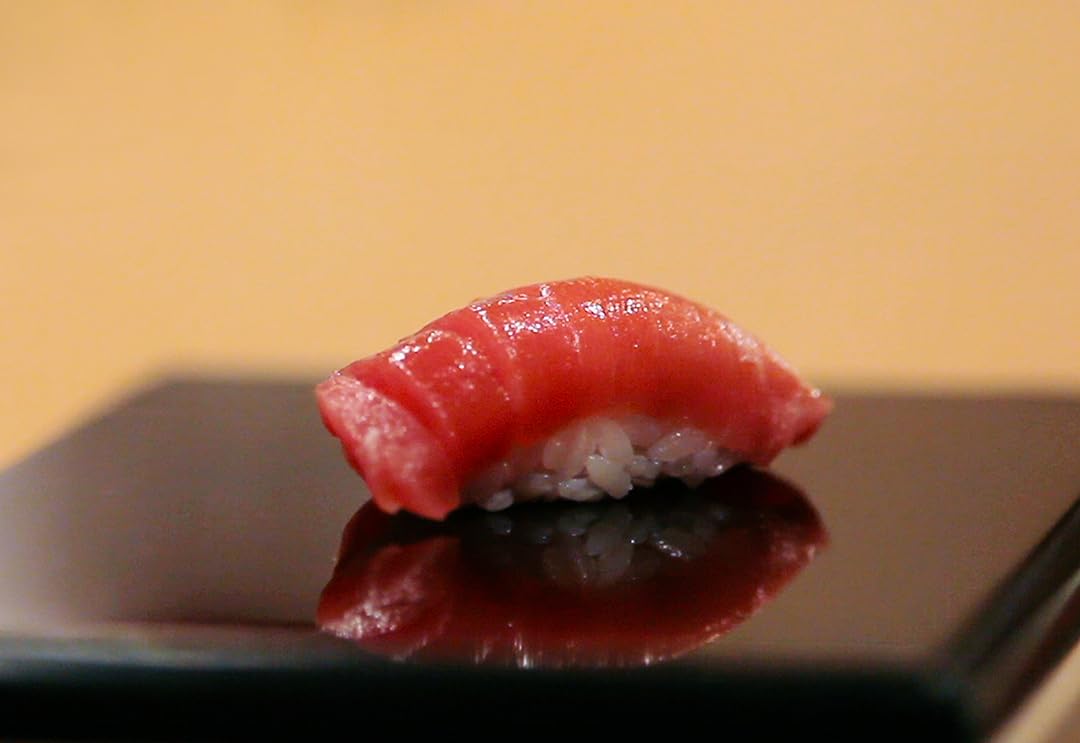 (1,694)7.91 h 22 min2011X-RayPG
An enthralling portrait of 85-year-old Jiro Ono, the most famous sushi chef in Tokyo, whose award-winning eatery is a destination spot for sushi lovers everywhere.

joel wingReviewed in the United States on May 31, 2021
4.0 out of 5 stars
A man who made his dreams come true
Verified purchase
The title of this film derives from the fact that Chef Jiro Ono used to have visions of food in his sleep. It’s a story of a driven man who was abandoned by his family when he was 7 or 9 years old. He was a perfectionist. He was always trying to make his food better. It also delves into his two sons that apprenticed under him, going to the fish market to buy products, etc. If you love food you’ll love this.
3 people found this helpful

Jorge's AmazonReviewed in the United States on June 10, 2014
5.0 out of 5 stars
Should be required view in every school!!!
Verified purchase
Jiro Dreams of Sushi is not just a documentary about an old man making sushi on a tiny restaurant somewhere in the middle of Tokyo. As a matter of fact the documentary could have been made about a guy that builds bridges, or a lady that makes dresses, or a farmer planting his crops. The fact that the movie is about sushi is beside the point.

The movie is about a Grand Master Craftsman and his astronomical passion for absolute excellence. In a world where people live paycheck to paycheck working a job that they hate, and not enjoying life just to make it month to month and pay the bills. This documentary displays how one man with his passion for sushi made it his life mission to live out his dream which is to make the most amazing, delicious, and perfectly crafted sushi in the world! Jiro Ono is not only an inspiration to all of us seeking purpose in life. But he also demonstrates that there is something more important than money, wealth, and fame... And that is to live your dreams, to pursue them. Find that which you love to do, and do it, everyday! Life is too short to focus on things that time will erode away. This documentary should be a part of social science curriculum in every school...

GabeReviewed in the United States on September 6, 2014
5.0 out of 5 stars
Perfection is not something achieved. Perfection is practised.
Verified purchase
Jiro Ono is a Shokunin.

Shokunin is often translated as "Artisan" or "Craftsman". Which while not incorrect, is certainly incomplete.

A shokunin may at first glance seem like a workaholic. And perhaps some workaholics are actually shokunin, but not being Japanese, do not have the privilege to be named as one. (Interestingly, the Japanese also have a term "Karoshi" which means "death from overwork".)

But a shokunin is more than just a workaholic. It is not simply work, it is art, it is a calling, it is the pursuit of perfection, it is the continuous journey to understanding, achievement, and fulfilment of the full potential and purpose of the work.

My view is that a shokunin is not simply a workaholic. A workaholic (like an alcoholic or any other kind of addict) is either compensating for some defect or lack in his/her life, escaping from life, or both. A shokunin is attempting to achieve perfection. Not for others. Not for himself. But perfection is its own goal.

"Jiro Dreams of Sushi" is about one man's pursuit of perfection in sushi. It is both a very narrow focus, and an impossible subject for a movie, but succeeds anyway.

E PeaReviewed in the United States on October 13, 2016
5.0 out of 5 stars
The Disciplined Life Of A Master Sushi Chef
Verified purchase
Jiro's thoughts, work, and reason for being are centered around making a better sushi today than he did yesterday.

He meticulously oversees the discipline and very subtily improvises the proven methods. He takes apprentices on for the long term and forms them. His sons were his apprentices and, in a very real sense, they still are. He has earned their respect, the accolades of the industry, having earned the coveted Michelin 3, and admiration of his suppliers, who themselves are persons at the top of their crafts.

His ten-seat restaurant commands the highest price per plate and reservations booked months in advance. Courses are prepared and served with each customer in mind, each person being observed by the master himself for the manner in which courses are presented. One food reviewer, who has eaten at Jiro's restaurant several times over several years, said that he has not ever had a disappointing experience there. Amazing. I want to go there.

This documentary is a thrill.
3 people found this helpful

R. Scott SearsReviewed in the United States on August 29, 2015
5.0 out of 5 stars
Excellent documentary about one man and his craft
Verified purchase
This is a refreshing film about work ethic and dedication to craft. Refreshing because it defines "success," not by wealth or possessions, but by happiness. Jiro is genuinely happy to have reached the pinnacle as a sushi chef, and yet he strives every day to improve his skills; no matter that he is eighty five years old. He also feels strongly that it is his responsibility to train his sons to reach his level of achievement.
This is a masterfully crafted documentary of the life of one man and his craft. I believe it will be enjoyed thoroughly by anyone interested in watching the attributes of discipline and hard work pay off.
This movie is also beautifully filmed, with a superb soundtrack of classical music that helps to enhance the whole experience; much like the subtlest of sauces masterfully brings out the umami in a simple piece of tuna sushi.
4 people found this helpful

simonReviewed in the United States on November 17, 2019
5.0 out of 5 stars
A movie for young ambitious people to watch and to humbly learn
Verified purchase
I'm just a college student but this movie teaches me a lot. It teaches me that we only have one life to live so we have to choose a job or, more than that, a career sticks to our life purpose. If you want to far in your career, constant practice is the way of mastery. The Jiro and his sons are just focused only on sushi and make the best as they can. Sometimes, people think that do the same job every single day is boring but they don't, they always keep working hard because they love what they do and require themselves to reach another higher level. Work ethic and personality are their methods of success. Jiro's restaurant makes success because it even creates a unique culture that customers feel great to be there and enjoy their cuisine. This movie even teaches me about networking, not only you go far with people you work with but even to find other experts who better than you at something you even need to learn more.
Jiro Dream of Sushi is worthy of your time to watch it! Many amazing quotes are included during the interviews.
One person found this helpful

SursubbuReviewed in the United States on July 31, 2014
5.0 out of 5 stars
If Ozu made a film with a food theme it would be like this
Verified purchase
As a friend of mine correctly remarked, if Japanese director Ozu had made a film with the theme of food, it would be something like this. While of course there are many, many shots of delicious sushi preparations, you need not be a food fanatic to like this film. It is really more about the quest of an individual to constantly improve his skill at his chosen profession. At 85 when the documentary was made, sushi chef Jiro is an institution and an inspiration, a reminder of an old-school generation that believed in constantly working hard and honing one's skills. It also looks at Jiro's sons, the eldest who is expected to take over the restaurant when Jiro retires / expires, and will remain till then an apprentice, the younger one ordered to leave home and start his own establishment.

To an extent Jiro has controlled the destiny of his sons to continue his own legacy, and the film does not shy away from pointing that out. There are also references to overfishing and its impact on the availability and quality of sea-life to make sushi. But the film is not preachy about these and also has many warm or gently humorous moments. The rituals of the restaurant staff make for surprisingly entrancing viewing and one gets a sense of the importance of continuously applying oneself to a task to attain a mastery over it.

The blu-ray shows excellent image quality in keeping with the source material and the audio is crisp and clear, especially the music. There's a commentary track where the director talks about his approach to the film and his reflections of the people he is covering. Highly recommended to Sushi fans, Ozu fans and anyone that would appreciate a well-made relaxing documentary.
One person found this helpful

Tashinamu8Reviewed in the United States on June 13, 2014
3.0 out of 5 stars
Foodie Movies
Verified purchase
This is definately a movie for Foodies. As a fellow Foodie, I thought I would love this movie. Was actually a little disappointed. I lived within a Buddhist Japanese-American family for sixteen years and many of the ideas are very much from that culture. I did respect the movie for showing those principles, but I must admit, I found the movie a little slow - shame on me! I had hoped to see more of the actual preparation of the sushi itself and then the final plating which is simple but extremely elegant in its simplicity. So, it was a fine movie, but I guess I had hoped for more presentation of skill and art than discussion of philosphy and a case study of one very masterful family and the ideals that guide them. The later is a VERY important part of the story, but simply not enough on the art and craft itself.

That being said, I will watch it again - probably many times over. (Just an FYI - for those of you who did not understand "Ground Hog's Day" with Bill Murray - you simply will not get this movie: SHOKUIN

[...]
See all reviews
Back to top
Get to Know Us
Make Money with Us
Amazon Payment Products
Let Us Help You
EnglishChoose a language for shopping. United StatesChoose a country/region for shopping.
© 1996-2021, Amazon.com, Inc. or its affiliates