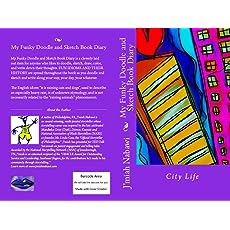 A native of Philadelphia (PA), J'miah Nabawi's storytelling career was inspired on two separate occasions, seeing the performances of the legendary Mandinka Griot (Djeli), Djeliba Djimo Kouyate at the Philadelphia Museum of Art and later by Linda Goss, best-selling author and the "Official Storyteller of Philadelphia (PA)," at the Please Touch Museum. However, it was the befriending of Ms. Goss that would eventually lead to her mentoring J'miah onto the path of professional storytelling and developing the brand of performance for which he has become known. J'miah's upbeat storytelling reflects the story-dance-musical drama of Africa and its Diaspora.

* Bilingual in Spanish and a poly-glot of sorts, J'miah also tell stories from around the world and is known to incorporate story-specific vocabulary, songs and text in the languages of Twi, Spanish, French, Chinese, Yoruba, Japanese, Gullah and Ki-Swahili during his performances. J'miah's artistic work with children and youth in underserved rural and urban areas has been recognized with Proclamations, Citations and Official letters from the Pennsylvania House of Representatives in Harrisburg, PA, the late Mayor Thomas Menino of Boston, MA and from the City of Miami (Miami Dade City Council), Miami, FL.

* From pre-school age children to high school and university going students, professors and staff, J'miah Nabawi has presented arts-in-education programs and workshop/residencies to a variety of audiences in both urban and rural communities. He created and served as the Here Comes the Storybook Man! for the NFL Philadelphia Eagles' Youth Partnership to promote family literacy and reading and later founded Books for Growing Minds™ as an independent publishing and literary services company. As a Teaching Artist/Performance Storyteller, J'miah has served on approved artist rosters for the Pennsylvania Council for the Arts; Boards of Cooperative Educational Services (BOCES) of New York State; Massachusetts Cultural Council, Boston, MA; Virginia Commission for the Arts, Richmond, VA; and Florida Council on Arts and Culture, Tallahassee, FL. J'miah is currently on Georgia Council for the Arts (GCA) roster of Traditional Artists and continues to be active with the South Carolina Arts Commission (SCAC) with Artist residencies and public performances throughout the Florence and Charleston, SC areas.

"Mr. Nabawi is one of Savannah's most visible and favored storytellers. He has been the community's choice for various festivities, with no barriers on race, ethnicity, or age. Whether it is through the Live Oak Public Libraries, The Telfair Museum, local churches, schools, universities, the leadership and service that he continues to provide through his profession is legendary here amongst Savannahians." ~Dr. Otis S. Johnson, Former Mayor of Savannah, GA

"The students at Jasper Elementary love J'miah. (The teachers at our school find him to be a full partner in curricular planning and implementation of lessons and units.) J'miah can tell stories, write and direct plays that are performed school-wide, teach small groups and make children laugh and smile. If he had a cape, he could fly . . . at least the children think so." -- Dr. Kathleen Thompson, Retired Arts Educator/Director of Cultural Projects (Georgia Council for the Arts)

J'miah is an esteemed recipient of the National Storytelling Network's (Jonesborough,TN) "ORACLE Award for Outstanding Service and Leadership, Southeast Region for his exemplary leadership to his community through storytelling." ~ The Elijah Agency

Learn more about this award-winning storyteller at www.jmiahnabawi.com and be sure to
check out his family literacy and interactive virtual ZOOM programming with
WorldBeat Books™ at www.worldbeatbooks.com 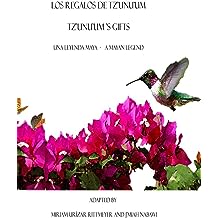 Los Regalos de Tz'unu'um - Tz'unu'ums Gifts: Una Leyenda Maya - A Mayan Legend Mar 20, 2018
by Miriam Urizar Rittmeyer , J'miah Nabawi
$4.99
“Tz'unu'um ’s Gifts” is the retelling of an ancient Mayan folktale, Gift to the Hummingbird. Here, the ancient Mayans continue to speak to us through the telling of this story and the stage has been set with the various characters within that have played a role in making hummingbirds the colorful flying jewels that they are today.
Read more
Other Formats: Paperback 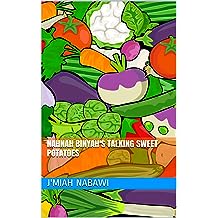 Based upon a folktale from Ghana, NahNah Binyah’s Talking Sweet Potatoes is a delightful friends and family story. Gather 'round for story time, assign the reading aloud parts and let the drama begin!

Quashee Alice Accra (a.k.a. Gullah Quashee) is J'miah Nabawi's alter ego. Dedicating the story to his family of "delicious sweet potato pie makers" and Gullah/Geechee kin, NahNah Binyah's Talking Sweet Potatoes is another one of J’miah's use of “inventive arts integration of language, play, and cultural heritage.” Reflective of his brand of storytelling, NahNah Binyah's Talking Sweet Potatoes is upbeat, language-rich cultural diversity that introduces readers to the Gullah language, also called Sea Island Creole, is a creole language spoken by the Gullah/Geechee people, an African-American population living on the Sea Islands and in the coastal regions of South Carolina, Georgia and northeast Florida.

NahNah Binyah’s Talking Sweet Potatoes pay homage to J'miah's paternal grandmother's Gullah/Geechee and Ghanaian roots and is a journey into the community of advocates intent on preserving the unique language known as “Gullah” and maintaining Gullah/Geechee folkways, history and cultural heritage.

Throughout the book are creative works by various visual artists, J’miah's way of supporting artists and promoting obscure and/or lesser known works and artists through his book covers, illustrations, blog posts. 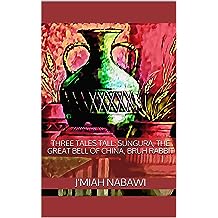 "Three Tales Tall" is a series of books that feature three diverse stories and folktales. Retold, adapted or written by J'miah Nabawi, Three Tales Tall is consistent with his brand of engaging spontaneity during storytelling performances as he takes the same improvisational liberties with contemporary and classic versions of stories and traditional folktales. J'miah prefers literary works and orature that can be readily shaped into impromptu musical interludes and rhythmic play.

The Three Tales Tall books themselves are dedicated to preserving and perpetuating the timeless art of storytelling and a celebration of oral traditions. The Three Tales Tall series of books are also J'miah Nabawi's way of advocating for the publishing and perpetuation of traditional animal tales, folktales that are in fact hardly ever told and are still vibrant with the wisdom of life.

A native of Philadelphia, PA, J’miah Nabawi is an award-winning, multi-faceted performance storyteller. Bilingual in Spanish and a polyglot of sorts, J’miah Nabawi has shared his brand of high-spirited interactive storytelling across the United States and Mexico in schools; museums; colleges and universities. 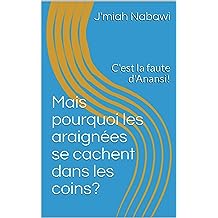 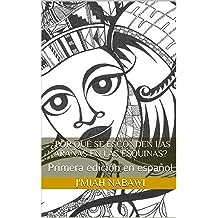 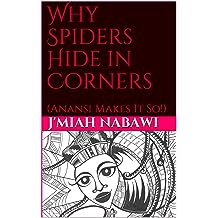 Why Spiders Hide in Corners (Anansi Makes It So!) is a delightfully told story that will engage both the reader and all whom have gathered around for the telling of this tale. The author’s original spin on this was first published as "Why Spiders Hide in Corners" as part of an anthology for a Simon and Schuster bestseller (Talk That Talk: An Anthology of African and African American Storytelling, Edited by Linda Goss and Marian E. Barnes). Thanks to his fans, readers and friends from around the world, Why Spiders Hide in Corners by J'miah Nabawi can now be enjoyed and read in five major world languages: English, French, Spanish, Mandarin Chinese and German.

Why Spiders Hide in Corners (Anansi Makes It So!) continues with WORLDBEAT BOOKS™ mission to publish folktales, stories and authors who promote and perpetuate "oral literature" that encourages family time, wellness and meaningful play through the art of storytelling. Illustrations are by noted Charleston, SC visual artist and Savannah College of Art and Design (SCAD) graduate, Tasica Singleton. Tasica brings to life J’miah’s vision of graphics reflective of Ananse-the Spider-man's Asanti/Akan origins that also make historical connections with tradition textile Adinkra and Kente-cloth patterns. J'miah Nabawi's Why Spiders Hide in Corners (Anansi Makes It So!) is a “let's do” story that promises to be fun for all. Gather 'round. It's storytelling time! Enjoy! ~ WORLDBEAT BOOKS™.

Summary
Rabbit decides to visit his friend, Anansi the spider-man, whom he hasn’t seen in quite a while. Wanting to celebrate their friendship, Rabbit invites Anansi to join him in making a drum. From his cozy hammock, Anansi refuses with excuses of being too sick to get involved with drum-making. Alone, Rabbit works hard at making his “friendship” drum and decides to drum on it a while before taking a rest. While Rabbit is resting from his hard work at drum-making, he soon hears drumming and play just outside his home. He goes to the door and finds Anansi playing his drum while his wife and children are dancing around the very same drum Anansi was supposedly “too sick” to help make. Anansi soon ends up in an embarrassing situation, one that which we all may have come to face within friendships from time to time.

Useful “interactive” information on ANANSESEM (the telling of Ananse stories) follows the story and is based on the author’s workshops/artist residencies. “NOTES” pages complete the book for your continued enjoyment.

“J’miah’s work passes on tradition, teaches language and helps develop a love for storytelling. Why Spiders Hide in Corners (Anansi Makes It So!) is a lively appealing book and consistent with who he really is.” ~ Judy Strong, Youth Services Coordinator, Live Oak Public Libraries, Savannah, GA
Read more
Other Formats: Kindle , Paperback 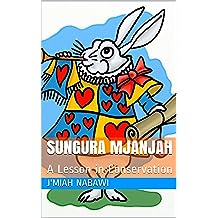 So sang Sungura Mjanjah, the clever Kenyan rabbit, as he gazed upon the snow-capped peaks of Kilimanjaro (Mount Kilimanjaro) while contemplating the daily life of his village.

Sungurah Mjanjah has always had a love for preserving natural resources and playing light-hearted tricks on many of his friends and people. Not to be mean. No way! Only to teach a lesson. He wanted to remind his village of the old adage: "You never miss your water 'til the well runs dry." Sungura had a plan. For the first time, a rabbit shall roar like a lion. Enjoy!
~ Books for Growing Minds
Read more
Other Formats: Paperback 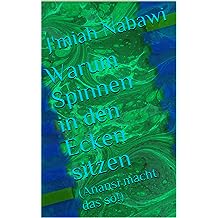