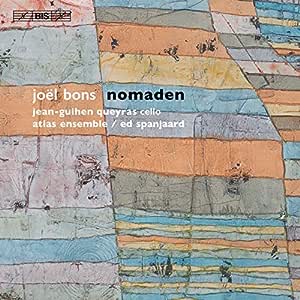 In the words of composer Joël Bons, ''Nomaden is like a journey during which the protagonist cellist Jean-Guihen Queyras 'meets' musicians from different traditions and enters into dialogue with them. It is not a cello concerto as such, but rather a concertante work for cello and soloists from other cultures.'' With a playing time of roughly an hour, Nomaden ('Nomads') is made up of 38 brief sections, most of which run into each other without any pause. Two types of musical material run like a thread through the work: the 'Nomad-music' which return eight times but always presented each time in a different light, and the so called 'Passages': static episodes on one or two tones (or a chord) that explore the various instrumental timbres. These lead into the various 'main' episodes featuring encounters between the cello and the instruments from other cultures. Bons composed the work for Queyras and the Atlas Ensemble a group he himself founded in 2002, made up of 18 eminent musicians from China, Japan, Central Asia, the Middle East and Europe. From the Japanese shakuhachi and Chinese erhu to the Armenian duduk and the Persian setar, the scoring offers an untold number of combinations and an unheard spectrum of timbres. Nomaden was premièred by these performers in 2016, under the baton of Ed Spanjaard, and has been awarded the prestigious 2019 Grawemeyer Award for Music Composition.