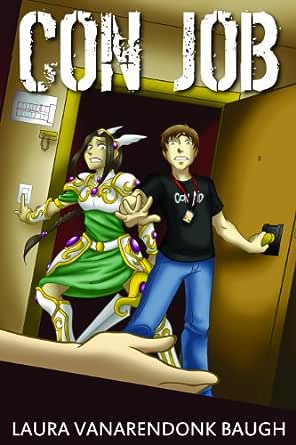 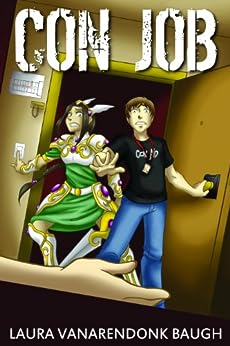 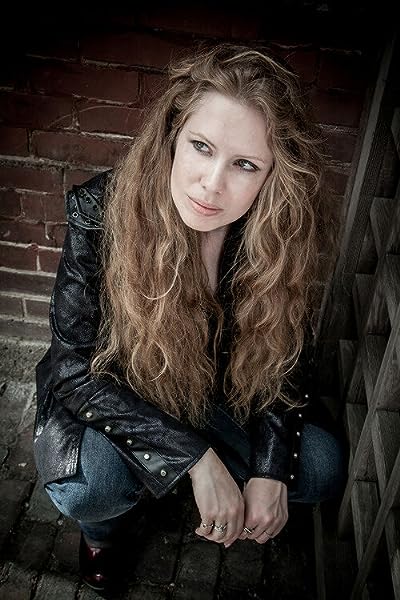 "Brilliantly written, immersive, and fun, CON JOB drops a twisting, complex mystery into a unique and perfectly rendered setting, told with a rapid pace that keeps the pages turning--and readers wondering--all the way to the satisfying end. Perfect for mystery fans, readers of READY PLAYER ONE, and anyone else with a love of pop culture and crime fiction." -- Susan Spann, author of the Hiro Hattori Mysteries

Laura was born at a very early age and never looked back. She overcame childhood deficiencies of having been born without teeth or developed motor skills, and by the time she matured into a recognizable adult she had become a behavior analyst, an internationally-recognized and award-winning animal trainer, a popular costumer/cosplayer, a chocolate addict, and of course a writer. Find her at www.LauraVanArendonkBaugh.com --This text refers to the paperback edition.
Read more

L. M Young
VINE VOICE
5.0 out of 5 stars Cosplay, Conventions, and a Dash of Death
Reviewed in the United States on January 21, 2015
Verified Purchase
This is a fun, yet properly puzzling mystery story that takes place at a science fiction convention. Our protagonist is Jacob Foster, a young man whose ambition it is to be a police officer. He's taking his mind off his nervousness about applying for the academy by attending a convention with his friends, but discovers he'll have to put some sleuthing skills to work after a young woman is found dead and it becomes apparent that she was deliberately poisoned. The last thing Jacob and any of the other convention workers want is a panic spreading out among the attendees.

Laura Baugh chronicles a typical multi-focus SF convention on paper and represents it perfectly: the fun, the chaos, the nonstop action, demanding guests, and overworked staff, addressing everything from cosplay to the vagaries of DVD releases of fan favorites to behind-the-scenes drama. Jacob is Everyfan right from the start (registration messes up his badge; how typical!), someone you would enjoy being friends with, and his companions, including an aspiring voice actress, come off as "real folks" and not stereotypes. I was also partial to Jacob's Aunt Lydia, who, in one marvelous scene, tells off a couple of sneering jocks in fine style. (It's one of those scenes you can't read without sticking your fist in the air and saying "Yes!")

In addition, there are sly references to a fan-favorite television show that never got released on DVD which are worked so appropriately into the text it brings a big grin to your face.

I enjoyed this so much I've already read it twice, and I'll probably read it again.
Read more
2 people found this helpful
Helpful
Report abuse

Susan Spann
5.0 out of 5 stars Fast, Fun, & Immersive - Fans of READY PLAYER ONE will love this mystery.
Reviewed in the United States on August 20, 2016
Verified Purchase
For me, a good mystery has to satisfy on at least one of three levels: fast pacing, immersive voice and setting, or characters and a plot that draw me in and refuse to let me put the story down. CON JOB hit the mark on all three. I stayed up until 4am to finish it (while at a conference and in a hotel, when I knew I had to each the next day) because I could not bear to leave the story.

As a convention-goer and self-admitted sci fi/fantasy geek, I loved that the novel captured the conference setting in a way that was both totally accurate and approachable for readers who might not have experience in (or be part of) that world. It's a difficult thing to write a compelling, twisty mystery - and to do it in such a unique and interesting setting raises the level of difficulty substantially, but CON JOB is pitch-perfect all the way through. The characters are unique, realistic, and three-dimensional. The plot stands up with the best being published in mystery today, and the setting is more unique and fun than anything else I've read this year (and I read a lot).

Fans of READY PLAYER ONE will adore this, even if they don't normally read mystery, and fans of mysteries who don't normally walk outside the "standard settings" will find this fun, highly entertaining, and a marvelous change of pace.
Read more
Helpful
Report abuse

mharper
5.0 out of 5 stars Such a fun read!
Reviewed in the United States on March 4, 2020
Verified Purchase
This book was SO GOOD! I’m rather new to the con world myself, but I love every minute I spend there. (Gen Con and World Con being the two I’ve been to.) Anyway, this mystery captured the fun atmosphere, a few rules I didn’t know (such as don’t touch a costume or makeup without permission—takes hours to put on and can come off or get messed up easily), and a plethora of intriguing characters. I read the book in one sitting and just had so much fun with it. Great read!
Read more
Helpful
Report abuse

Ian Keller
4.0 out of 5 stars Murder Mystery For the Geeks
Reviewed in the United States on October 21, 2014
Verified Purchase
Con Job is not your typical murder mystery. Set in a convention for cosplayers, anime nerds, and geek culture, the main character, Jacob, must use some of his geek cred to help the police solve the crime.
The setting is very fun. I very much felt I was *there* at a fan convention, right along with Jacob. The writing is crisp and in the moment, and immersed me completely. At times I would have liked a bit more description about certain costumes, but overall Baugh does an admiral job of detailing the setting.
My main complaint is that the story doesn't really get any tension involved until the later part of the book. What I mean by this is that for the first couple murders, Jacob is just investigating for the fun of it. He isn't in any danger. He isn't being accused of anything.

The second half of the story ramps the tension up, which helped immensely with the tone of the book. Up until that point I'd kinda been meandering along, not really too concerned with finishing the book in a timely manner.

However, once the lynch pin piece fell into place and made it personal for Jacob, I couldn't put the book down - I stayed up until O'dark thirty to finish it, despite needing to be at work early the next morning.

This is an awesome book for anyone who enjoys attending fan conventions, but due to the slow start I can't give it more than four stars.
Read more
Helpful
Report abuse
See all reviews
Back to top
Get to Know Us
Make Money with Us
Amazon Payment Products
Let Us Help You
EnglishChoose a language for shopping. United StatesChoose a country/region for shopping.
© 1996-2021, Amazon.com, Inc. or its affiliates