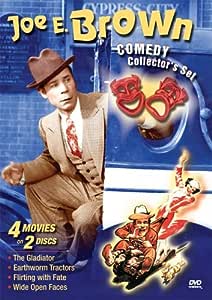 This collection of films starring Joe E. Brown is one for all who enjoy easy-going, lighthearted humor. On Disc One, The Gladiator, (1938) Hugo Kipp (Brown) is a nerdy type college student who is injected with a super-serum by a mad scientist (Lucien Littlefield). The result causes the normally unathletic Brown to be quite the campus stud who catches the attention of pretty coed Iris Bennett (June Travis). Plus, Wide Open Faces (1938) A fortune has been stolen and every thug in town is looking for it. They all end up staying at a young woman's inn. The crooks all end up jailed thanks to the effort of a naive fountaineer (Brown). On Disc Two, Flirting with Fate, (1938) Dixon (Joe E. Brown), the manager of a third-rate vaudeville cast stranded in a South American country. Penniless, Dixon comes up with a plan to finance the actors' trip home: he'll take out a huge life insurance policy, and then arrange to get himself killed by bandit chieftain Sancho (Leo Carrillo). Plus, Earthworm Tractors, (1936) Alexander Botts (Brown) is a fast-talking salesman who really knows nothing about tractors, trying to push the big sale on the grumpy, unconvincing lumberman Johnson. The sell is not easy, but Botts pushes on with the help of Johnson's daughter. Bonus Features: Trailers| Actors Bios| "Fractured Flickers" Sampler. Specs: 2-DVD9s; Dolby Digital; 274 minutes; B&W 1.33:1 Aspect Ratio; MPAA - NR; Year - 1936-1938; SRP - $19.99.

Randy E. Halford
5.0 out of 5 stars Likable underdog Joe E. Brown gets showcased
Reviewed in the United States on February 5, 2011
Verified Purchase
Joe E. Brown, a robust comic personality, gets a terrific DVD showcase from CVI Entertainment. One can see why he was one of the top box office draws of the 1930's---equipped with a wide slot of a mouth which could be contorted into any comic mask, and a penchant for bumbling in & out of trouble, Brown was an ideal movie clown. Often cast as an underdog or "local boy makes good" type that silent comedian Harold Lloyd built his career on, Brown projected that same type of silent movie innocence. Yet, he didn't directly rely on wisecracking jokes or dialogue. Therefore, his screen personality fell happily somewhere in the middle. However, his distinct voice could turn a regular line into a funny one, combined with great facial reactions and that trademark yell.
Three of the four films here are when Brown left Warner Bros. to work for independent producer David Loew; a move that Brown himself said was "bad advice and a disastrous move", for he soon became known as a "B-movie" star at the box office. The production values & scripts occasionally looked & felt second-rate. But despite all this, Brown gave it his all & turned out some pretty good comedies.
"The Gladiator" (1938) is arguably the best of the Loew films; an irresistible comedy casting Brown as a nerdy outcast type at college who's injected with special serum from a campus scientist which transforms him into a super-human athlete! The script mines every comic opportunity as Brown haphazardly breaks furniture, walls, floors, and nimbly leaps over & pushes away players during football games! The big climax is Brown wrestling Man Mountain Dean & must use his brains when the formula wears off!
"Wide Open Faces" (1938) is less successful but extremely pleasant as Brown plays the town soda jerk (Brown displays startling dexterity here doling out drinks & sundaes) who inadvertently captures a notorious crook & becomes famous. Helping to restore an old hotel, crooks from all over converge on it once they discover that the original crook stashed a fortune there. It's climaxed with a daffy chase via car, railway cart, and boat.
"Flirting with Fate" (1938) is a lively comedy with Brown as head of a theatrical troupe coming into South America. Desperate for success--and money--a despondent Brown tries to commit suicide so his troupe can collect on his life insurance, which leads to a series of comic misadventures...trying to shoot himself, drinking ant poison (it's really hard liquor), throwing himself into a lion's den, and asking a dangerous bandit to kill him. Climaxed by a bull chase & an "explosive" ending, it's dizzy fun!
"Earthworm Tractors" (1938) is one of Brown's last comedies for Warner's. A dandy comedy about an independent salesman who invests in earthworm tractors...in spite of the fact he knows nothing about them! Playing a pushy "go-getting" type, Brown manages to be likable/funny without being annoying as he optimistically pushes forward while seemingly oblivious to the comic devastation he leaves in his wake. Highlights include Brown demolishing the countryside (and the would-be investor's truck) during a demonstration; towing the investor's home to a new address (and narrowly missing a train); and another tractor ride through a dynamited, rickety bridged area that goes for thrill comedy.
The menus created for this DVD are quite impressive. It just goes to show that even "B-movie" material can't hold down a great talent like Joe E. Brown!

Sonlit Top Contributor: Pets
4.0 out of 5 stars Clean, Nearly Slapstick Comedy from Another Era
Reviewed in the United States on October 12, 2008
Verified Purchase
I bought this set because I saw Earthworm Moving Machine on TV years ago and LOVED IT! IT truly is one of the most hilarious, uproarious comedies I've ever watched. If you love old movies, can handle black and white and don't mind the lesser quality and occasionally unstable movement of older filming, you will be engrossed in very fine, nearly slapstick comedy. Joe Brown acts the part of the inflated ego driven, bumbling idiot as well as any actor who ever lived. He is zany Lucy in masculine form. The other comedies in this series may fall along these lines as well but could lack some of the sheer vigor of EMM. These movies represent the typical era mini dramas of falling in love, trying to impress the girl of your dreams (clean enough for children of all ages) and eventually succeeding...but perhaps not with the girl of your dreams but a real dreamgirl. Earthworm is amazing because there do not appear to be any stuntmen or standins and to see what these actors were willing to do for a laugh is shocking. Some of the footage is so riotously funny you may literall split a gut laughing. I borrowed this film to my sister, a nurse, who played it for a friend who had undergone surgery...she literally split her stitches laughing. That's my only caution, otherwise enjoy it in good health!
Read more
One person found this helpful
Helpful
Report abuse

John Erickson
4.0 out of 5 stars The Original Mr. Nice Guy in the Wrong Place at the Wrong Time
Reviewed in the United States on September 12, 2009
Verified Purchase
Joe E Brown was a great comedian in the 1930's and on usually playing the nice guy that is dragging everyone to straight to Hades with his good intentions. Mix ups, mis-heard, assumptions and trying to do the right thing has Mr. Brown crossing paths with contractors, football players, boxers and of course his girl to be. Some of it is madcap and other parts are tounge in cheek, but if you are in tune with the era you'll laugh and smile at the antics. (Also, if you're interested in vintage clothing and fashion this film has a lot to see and Joe's suits are outstanding!) There are some thrills and chills for the day but rest assured it will all work out ok. Our Gang-Little Rascals fans will spot a young Dickie Moore in the one back to college film.

If you're in tune with the time these films were made, you should have some good laughs.
Read more
3 people found this helpful
Helpful
Report abuse

jachorn
4.0 out of 5 stars Public domain copies of some rare Joe E. Brown
Reviewed in the United States on July 12, 2008
Verified Purchase
VCI has assembled three post-Warner Brothers films by Brown plus "Earthworm Tractors." I like Brown a lot, and his personality certainly carries these films, which for the most part are in the B-movie category in my opinion. Still, any lover of comedy and especially Brown should have this in their collection, or at least rent it to view them. The quality is fair - not bad really, but no real restoration seems to have been made here (in fact "The Gladiator" was taken from a 16mm print released by Nu-Art Films). In spite of the lack of real bonus material (though the bios are nice references), the movies contain little gems of routines in them sprinkled here and there. I might have given it three stars if it weren't for Brown's performances, otherwise the quality of both the copies and the original productions is just fair.
Read more
4 people found this helpful
Helpful
Report abuse

anthony m. molloy
3.0 out of 5 stars BUYER BEWAREE
Reviewed in the United States on November 4, 2014
Verified Purchase
RECEIVED JOE E BROWN COMEDY COLLECTORS SET....THE 1ST DVD WAS A BIG DISAPPOINTMENT.....BOTH FILMS ARE MINOR LEAGUE... THE GLADIATOR IS TECHNICALLY JUST OK ... TRANSFERRED FROM A 16 MILLIMETER ORIG FILM PRINT.... FUNNY IN SPOTS BUT JUST AVERAGE IN THE LAUGHS DEPT. THE OTHER ONE WITH JANE WYMAN IS UNWATCHABLE DUE TO THE TERRIBLE SOUND TRACK .. DIDNT MATTER.. THIS IS STRICTLY A 'D' MOVIE....ON DISC 2 THE QUALITY OF BOTH WERE MUCH BETTER BUT JOE E. BROWN WAS OVERSHADOWED BY THE SUPPORTIMG CAST.... ESPECIALLY LEO CARILLO WHO WAS VERY FUNNY..... AS FOR THE FINAL FILM ' EARTHWORM TRACTORS' THE QUALITY OF THE PRINT IS EXCELLENT AND THIS IS ONE OF JOE E. BROWNS BEST FILMS... HE AND GUY KIBBEE ARE GREAT TOGETHER... THIS ONE DIAMOND IN THE ROUGH FILM IS KEEPING ME FROM RETURNING THE SET......
Read more
One person found this helpful
Helpful
Report abuse

G. Alan Hicks
5.0 out of 5 stars WE NEED MORE JOE E. BROWN TITLES AVAILABLE!
Reviewed in the United States on December 3, 2009
Verified Purchase
Though by far not the best of Brown's films, I have to admit that it is great to have four of his "B" comedies available on DVD. As usual, VCI have given us a very nice selection and for a very reasonable price.

So, when can we expect to see Volume 2, VCI? I'll be the first to pick it up.
Read more
2 people found this helpful
Helpful
Report abuse
See all reviews

Page 1 of 1 Start overPage 1 of 1
Previous page
Next page
Pages with related products. See and discover other items: gladiator movie