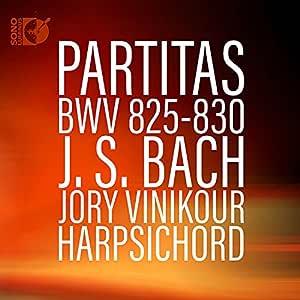 Jory Vinikour (Artist), Johann Sebastian Bach (Composer), __ (Conductor) & 0 more Format: Audio CD
5.0 out of 5 stars 5 ratings
See all formats and editions Hide other formats and editions
Includes FREE MP3 version of this album.&nbspProvided by Amazon Digital Services LLC. Terms and Conditions. Does not apply to gift orders.&nbspComplete your purchase to save the MP3 version to your music library.
Available at a lower price from other sellers that may not offer free Prime shipping.

"Vinikour's performances are so buoyant, glistening or noble that you'll likely find yourself glued to your speakers (or headphones). And if you're accustomed to hearing the harpsichord at some distance in a concert hall, be prepared to listen as if you're standing next to the keyboard..."
--Gramophone

"Playing with elegance and an innate sense of phrasing that allows lyric inventions to shine through the natural flow of the music, Mr. Vinikour achieves the distinction of offering playing that is genuinely moving."
--Joseph Newsome, Voix des Arts

The six partitas for harpsichord by Johann Sebastian Bach are among the greatest and most inspired works of all keyboard literature. Although they are the first works that Bach decided to publish, they represent the composer's genius at the height of his maturity, matched only by the Goldberg Variations. Performed on a stunning copy of a North German instrument of Bach's time, rich and expressive, but also clear and incisive, built by Tom and Barbara Wolf, each of the partitas is a microcosm, ranging from the poetic and pastoral (no. 1, in B flat Major), to the epic and tragic (no. 6, in e minor). Bach shows himself to be playful, profound, meditative, theatrical, virtuoso - and always the greatest composer of counterpoint of all time.

His debut recording for Sono Luminus, The Complete Harpsichord Works of Jean-Philippe Rameau (DSL-92154), was nominated for a GRAMMY® award, in the category of Best Classical Solo Instrumental Recording in 2013. His follow-up recording, Toccatas: Modern American Music for Harpsichord received the same honor two years later

Yves A. Feder
5.0 out of 5 stars Truly a superlative and distinguished interpretation.
Reviewed in the United States on February 10, 2017
Verified Purchase
This is the most exciting and expressive release of the Partitas that I've heard in many years. There are so many good, professional, even technically flawless recordings out there - but so few that ascend to the highest levels of expressive musicianship as this one does. Jory has a masterful approach to phrasing and rubato, to how to use rhythm and also bring ornaments right into the thrust of the line for beautiful impact. He propels the music to an Olympian level, whereas so many performers just make their way through almost mechanically. He brings to bear what is a keyboard artist's equivalent to the kind of mystical and heavenly individuality of a Lawrence Olivier intoning the great subtle and meaningful lines of Shakespeare. This is Bach at its absolute finest, and the harpsichord sound is absolutely delicious and well captured. Bravo Mr. Vinikour!
Read more
2 people found this helpful
Helpful
Comment Report abuse