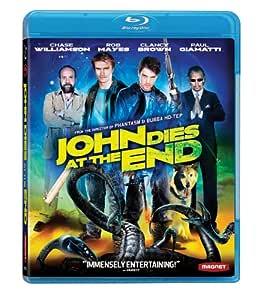 Secure transaction
Your transaction is secure
We work hard to protect your security and privacy. Our payment security system encrypts your information during transmission. We don’t share your credit card details with third-party sellers, and we don’t sell your information to others. Learn more
Details
Ships from
Amazon
Sold by
PRIME SPECIALS
Return policy: This item is returnable
In most cases, items shipped from Amazon.com may be returned for a full refund.
Read full return policy
John Dies At The End [Blu... has been added to your Cart
New & Used (24) from
$8.03 + $3.99 shipping

John Dies At The End [Blu-ray]

It's all about the Soy Sauce, a drug that promises an out-of-body experience with each hit. But some who come back are no longer human. Suddenly a silent otherworldly invasion is underway, and mankind needs a hero. What it gets instead is John and David, a pair of college dropouts who can barely hold down jobs.

4.6 out of 5 stars
4.6 out of 5
1,836 global ratings
How are ratings calculated?
To calculate the overall star rating and percentage breakdown by star, we don’t use a simple average. Instead, our system considers things like how recent a review is and if the reviewer bought the item on Amazon. It also analyzes reviews to verify trustworthiness.
Top reviews

Sweetpea
3.0 out of 5 stars No justice done to book
Reviewed in the United States on January 5, 2018
Verified Purchase
So... I love the John Dies books, have them all in book for a nd on Audible, and I really wanted to like this movie. It fell short of my expectation, but to be fair, the books are ridiculous. I did appreciate that they left the dick doorknob in. However, I didn’t like how superficial and peripheral the directors made Amy. She was so important in the book! And she’s just... a girl in the move. Also, so many fun things were cut out. I mean, I get why, but it still bummed me out.
Read more
10 people found this helpful
Helpful
Report abuse

IntoTheFugue
4.0 out of 5 stars Great Movie and a Great Disc
Reviewed in the United States on November 9, 2020
Verified Purchase
If you're buying this then you know the movie and love it or have hear of it and feel the need to experience it yourself. I'm here to tell you about the disc itself. The transfer is rock solid. The only time it looks weak is in the large green screen sequences where background quality doesn't match the actors but that is inherent in the film itself not the transfer. Sound is fantastic and really conveys all the madness onscreen. Features? Comes with a surprising amount given it's a non-boutique release. We get the essential commentary, featurettes and docs, interviews, deleted scenes, etc. Way more than we get in most releases nowadays. Great buy especially since the disc usually goes for pretty cheap. Get it while it's out there!
Read more
2 people found this helpful
Helpful
Report abuse

Jonathan Palma
5.0 out of 5 stars Book is better...
Reviewed in the United States on November 22, 2019
Verified Purchase
As you'd expect the book version will always be better than whatever hollywood can churn up. The movie is too condensed and goes off on its own story. Of course no one will be able to do the book justice with how much stuff goes on in it, impossible. With all that being said, the movie can still be entertaining and does have some neat references to some of the text. Go ahead and watch it, then read the book.
Read more
2 people found this helpful
Helpful
Report abuse

Karl Weaver
5.0 out of 5 stars WATCH THIS FILM!
Reviewed in the United States on March 26, 2014
Verified Purchase
I watched this on Blu-ray late last year, and I LOVED IT. Ostensibly it's a "horror movie", but could better be described as zany comedy with a sci-fi sort of twist, truly clever plot and dialog. Paul Giamatti is the best-known actor of the lot, although his is only a supporting role (and I think he helped produce it). The lead actors are two friends, who unwittingly get sucked into some cosmically important good vs. evil struggle involving other dimensions sometimes breaching into this one with malign intent. Think "Men in Black" mixed with a dash of "Limitless" and a dash of some psychedelic, and you might end up with a movie like this. I know, all you people who read the book will insist it's way MORE clever. My motto: NEVER compare a book to the movie based on it. They are different experiences. You wanna read the book, do that too. Personally, I loved some of the "special features" on the Blu-ray (they are also on the DVD version I assume) which include several deleted scenes, one of which is an extended scene with a TOTALLY BRILLIANT MONOLOG that I really wish had not been cut from the theatre release. Other interesting comment in "special features": the director explains how this is likely the first-ever full-length theatre movie made as a RESULT OF A COMPUTER! Seriously. But again, it's complicated...he had been buying a bunch of "horror" novels on Amazon.com and as a result, algorithm results told him that based on prior purchases he might enjoy reading "John Dies at the End". So he bought it, read it, loved it, wanted to make a movie from it, and did so. Voila! PS: at least in the movie, John does not really "die at the end" but that's because--did I mention--clever plot? Yeah. If you EVER enjoy comedy-sci fi or comedy-horror, you're going to like this movie! [Yes I will read the books too...later]. PS: if you can, I would go with the Blu-ray version. There's a moderate amount of computer graphics in the movie and in my experience, landscapes and CG shine the best in high definition (while close-ups of faces just reveal more defects than a DVD does). So a better appreciation of the visuals should make the Blu-Ray version worth seeing.
Read more
10 people found this helpful
Helpful
Report abuse

Hee Chul Kwon
5.0 out of 5 stars A LEGENDARY DIRECTOR'S ANOTHER GREAT WORK
Reviewed in the United States on April 18, 2016
Verified Purchase
Honestly this movie is so eye popping and so uniqe but I didn't followed the whole time since maybe my mind was kind of busy for other stuff as well as this movie is kind of hard to concentrate in some way.
But one thing for sure Is I should say this out loud, There is still director like him that makes a truely new story yet.
There are people saying that there is no more new stories left anymore. It is now matter of how to make the old story togather and how to make them a better one. It is not true according to this film.
There are monsters, there are time travels, there are dream and reality mixed ups so two of the same people appear in the same scene. And so on.
If you don't concentrate, you won't understand what's going on in this movie.
The SF is amazing and sometimes it reminds of Tim Burton's <BEETLEJUICE> too. But much more upgraded one.

There is this image that all of the inner body parts like lung, heart, legs, arms, guts all gathered glued and alive. That was truely gripping.

I cannot say much and you just have to watch this movie. It's just fun to watch after all. sometimes it's funny and qurky. Sometimes it's just wow! How can he think that out kind of stuff.
The director made a legendary movies like PHANTASME back in 1979 before.
Read more
4 people found this helpful
Helpful
Report abuse
See all reviews

Mrs. D. Moncrieff
2.0 out of 5 stars Not as good as I expected
Reviewed in the United Kingdom on April 9, 2015
Verified Purchase
I have to say that I am a big fan of the Phantasm series and especially Bubba Ho-Tep so I couldn't wait for this to come out.What a let down this turned out to be though,there's a smugness to this film that just doesn't gel.You feel as if this film was more fun to make than it was to watch.Why Clancy Brown is so underused is anyone's guess and its One of those films that assumes you've read the book and when it begins its as if You stepped into the movie halfway through,there's no character build up and the tiniest of stories.Roll On Bubba Nosferatu to get Coscarelli's career back on track.Nice to See Angus Scrimm in a Cameo though.
Read more
Report abuse

Jason Robertson
5.0 out of 5 stars Surreal and quirky fantasy comedy.
Reviewed in the United Kingdom on September 8, 2014
Verified Purchase
Coscarelli films often have a subtext, but this one is just fun. It is definitely unconventional, but quirky and enjoyable. If you are uncomfortable with the kind of narrative structure and shifts you find in South Korean films (for example) and prefer simple conventional narratives, this may not be for you. But if you like wry and surreal humour and fantasy, this is well worth a watch.
Read more
2 people found this helpful
Report abuse

cdav5000
5.0 out of 5 stars Five Stars
Reviewed in the United Kingdom on August 31, 2017
Verified Purchase
Totally brilliant film really out of the box, humorous and original with a touch of lovecraftian flavouring.
Read more
Report abuse
See all reviews