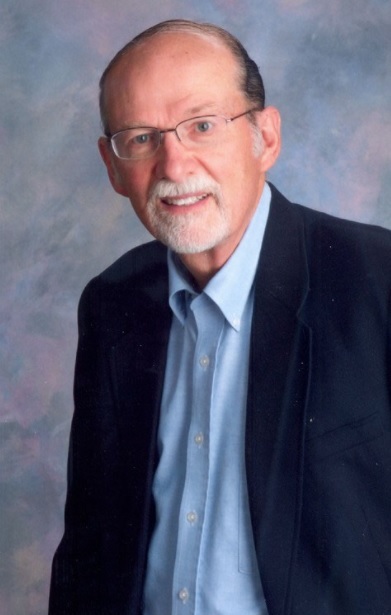 A writer, speaker, and adult-education leader, John E. Hallwas is Distinguished Professor Emeritus at Western Illinois University. Well-known for his many books about Illinois and the Midwest, he has also written scores of journal articles and hundreds of newspaper and magazine essays, as well as several plays. The recipient of more than thirty awards for his teaching, scholarship, books, and educational service, Hallwas has also spoken in well over one hundred Midwestern communities, at colleges, universities, conferences, and organizational events. At WIU, an annual event named for him and inspired by his commitment to broadly focused higher education, the John Hallwas Liberal Arts Lecture, occurs in September.

Born in 1945 and raised primarily in Antioch, Illinois, Hallwas received his Bachelor of Science in Education degree (with honors) in 1967 and his Master of Arts degree in 1968. Both were from Western Illinois University. He was an NDEA Fellow at the University of Florida in the late 1960s and received his Ph.D. there in 1972. Hired by his alma mater, Hallwas taught English at WIU for 34 years.

The most widely published author in the history of Western, Hallwas has written or edited more than two dozen books and monographs. In 1994 Spoon River Anthology: An Annotated Edition was selected by Choice Magazine as one of the Outstanding Academic Books in America, and in 1996 Cultures in Conflict: A Documentary History of the Mormon War in Illinois, co-authored by Roger Launius, won the John Whitmer Historical Association’s “Best Book of the Year Award” and the Mormon History Association’s “Best Documentary of the Year Award.” In 1998 The Bootlegger: A Story of Small-Town America, which combines true crime narrative and biography, was nominated for the National Book Award for Nonfiction and the Pulitzer Prize for Nonfiction. Another noted book is Dime Novel Desperadoes: The Notorious Maxwell Brothers, which won the 2009 Midland Award for “Best Biography from the Midwest.” Among the most recent Hallwas books are Here to Stay: Reflections on the Dead in a Small-Town Cemetery (2012), which offers an innovative approach to local history through biographical commentaries that focus on crucial themes in the human experience, including self-realization, community, belonging, spirituality, and death; and On Community: A Crucial Issue, a Small Town, and a Writer's Experience (2015), which presents compelling short writings that both discuss this issue and examine the relationship between people and meaningful place. Some of the On Community writings relate directly to the author's hometown, Macomb, Illinois.

An expert on the literature of Illinois, Hallwas is the editor of Illinois Literature: The Nineteenth Century (1986) and Studies in Illinois Poetry (1989). He has also written introductions to modern editions of works by half a dozen Illinois authors, including Eliza Farnham’s Life in Prairie Land (1988) and Carl Sandburg’s Chicago Poems (1992). He recently co-edited, with Kathy Nichols, Memory and Community: The Life and Writings of W. H. Hainline (2018). He has also written about one hundred journal and magazine articles on Illinois authors, and he currently writes a series called "Forgotten Voices from Illinois History" for Illinois Heritage magazine.

Hallwas has written plays based on Illinois history, too, including Four on the Frontier (1982),The Paper Town (with Gene Kozlowski, 1985),The Conflict: A Soldier’s Memories of the Civil War (2011), and The Mysterious Bard of Sangamo (2019).

While teaching at Western, Hallwas was the founder and editor of a scholarly journal, Essays in Literature, during the 1970s, and he was the editor of another journal, Western Illinois Regional Studies, from 1980 to 1991.

At WIU Hallwas taught courses in medieval literature, world literature, American literature, and nonfictional creative writing for the English Department, and courses on cultural and intellectual topics for the Centennial Honors College. Among his many classes: “The American Naturalistic Novel,” “The American Autobiography,” “American Nature Writing,” “The Literature of American Violence,” “World Masterpieces,” and “Myth and Worldview.” He was also an archivist at Western’s Malpass Library from 1979 to 2005.

The author of local history books on his home area, as well as the writer and host for local history television programs, Hallwas currently writes a weekly newspaper column titled “On Community” for Macomb’s newspaper, the McDonough County Voice. Selected articles from that column are posted on this website, and his book On Community includes ninety of those articles, along with other writings.

Hallwas has been discussed in more than a dozen articles and reference books, including Twentieth-Century Authors, The Dictionary of Midwestern Literature, and Who’s Who in America. Among his two dozen awards and honors are the MidAmerica Award (for distinguished scholarship) from the Society for the Study of Midwestern Literature, the Studs Terkel Humanities Service Award (for decades of work as a lecturer) from the Illinois Humanities Council, the Faculty Service Award (for contributions to adult education) from the National University Continuing Education Association and the Lifetime Achievement Award (for writing, speaking, and cultural leadership) from the Illinois State Historical Society.

Hundreds of the Hallwas articles and lectures are available in the John Hallwas Collection at the Archives of Malpass Library, Western Illinois University. 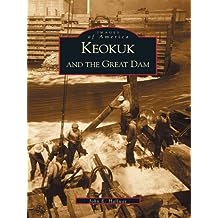 Keokuk and the Great Dam (Images of America) Apr 12, 2001
by John E. Hallwas
( 6 )
$12.99
This remarkable pictorial history tells the story of an engineering marvel: the first dam built across the
Mississippi River (from 1910�1913), and the historic
Midwestern community that fostered the world-famous
hydroelectric project. Keokuk and the Great Dam is the story of a colorful and historic river town with a dream of economic development and cultural progress; a self-taught engineer who took on a challenge that no one else wanted to attempt; and a massive construction effort that pitted men and machines against the awesome power of America�s greatest river. Completed shortly before WWI, the Keokuk dam (now known as Lock and Dam No. 19) was the culmination of a long struggle to employ the Mississippi River for hydroelectric power and to improve navigation on the great waterway. In frontier days the Des Moines Rapids, stretching north from Keokuk, prevented loaded steamboats from moving upriver. They also created a business opportunity for local residents. A rapidly growing town by the 1850s, Keokuk went into decline for many years when it failed to secure adequate railroad connections. But the coming of hydroelectric power
fostered a new dream, and local leaders set out to harness the great river. What followed was a dramatic effort that drew international attention, produced the world�s second largest dam (at the time), and forever changed both the community and the fabled American waterway.
Read more
Other Formats: Hardcover , Paperback 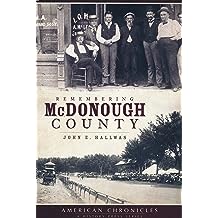 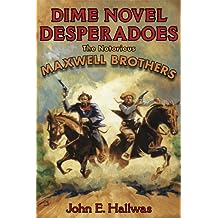 Dime Novel Desperadoes: The Notorious Maxwell Brothers Apr 4, 2011
by John Hallwas
( 9 )
$9.99
A thrilling true crime narrative and groundbreaking historical account, Dime Novel Desperadoes recovers the long-forgotten story of Ed and Lon Maxwell, the outlaw brothers from Illinois who once rivaled Jesse and Frank James in national notoriety. Growing up hard as the sons of a struggling tenant farmer, the Maxwell brothers started their lawbreaking as robbers and horse thieves in the 1870s, embarking on a life of crime that quickly captured the public eye.

Already made famous locally by newspapers that wanted to dramatize crimes and danger for an eager reading audience, the brothers achieved national prominence in 1881 when they shot and killed Charles and Milton Coleman, Wisconsin lawmen who were trying to apprehend them. Public outrage sparked the largest manhunt for outlaws in American history, involving some twenty posses who pursued the desperadoes in Wisconsin, Minnesota, Iowa, Illinois, Missouri, and Nebraska. Some of the pursuers were intent on a lynching, but the outlaws escaped against incredible odds. When a mob finally succeeded in killing Ed, in broad daylight on a courthouse lawn, that event generated widespread commentary on law and order. Nevertheless, the daring desperadoes were eventually portrayed as heroes in sensationalistic dime novels.

A stunning saga of robbery and horse stealing, gunfights and manhunts, murder and mob violence, Dime Novel Desperadoes also delves into the cultural and psychological factors that produced lawbreakers and created a crime wave in the post-Civil War era. By pointing to social inequities, media distortions, and justice system failures, John E. Hallwas reveals the complicity of nineteenth-century culture in the creation of violent criminals. Further, by featuring astute, thought-provoking analysis of the lawbreaker's mindset, this book explores the issue at the heart of humanity's quest for justice: the perpetrator's responsibility for his criminal acts.

Every overview and encyclopedia of American outlaws will need to be revised, and the fabled "Wild West" will have to be extended east of the Mississippi River, in response to this riveting chronicle of major American desperadoes who once thrilled the nation but have since escaped historical attention for well over a century. With more than forty illustrations and several maps that bring to life the exciting world of the Maxwell brothers, Dime Novel Desperadoes is a new classic in the annals of American outlawry.
Read more
Other Formats: Hardcover , Paperback 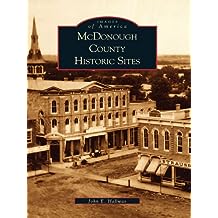 McDonough County Historic Sites (Images of America) Jan 15, 2003
by John E. Hallwas
( 2 )
$12.99
McDonough County Historic Sites depicts a remarkable agricultural region steeped in 19th-century tradition and community spirit. Originally set aside by Congress for veterans of the War of 1812 as part of the Illinois Military Tract, the land that is now McDonough County was settled by a diverse and ambitious population starting in the 1820s. From the trials of settlement to the coming of railroads and the establishment of small-town culture, McDonough County history reflects developments that have shaped America. The region's cemeteries, businesses, and homes that have endured-or vanished-offer stories of human endeavor that unite the people of the county to this day. The maps accompanying the chapters locate the county's many historic sites, such as the hotel in Macomb where Lincoln stayed during his 1858 campaign, the Prairie City Drugstore that launched a national poetry publishing company, and the remote village of Vishnu Springs that is now a ghost town. The historic images illustrate McDonough County's progress and controversy, small-town life and rural development, as well as religious diversity and cultural achievement.
Read more
Other Formats: Hardcover , Paperback , Mass Market Paperback