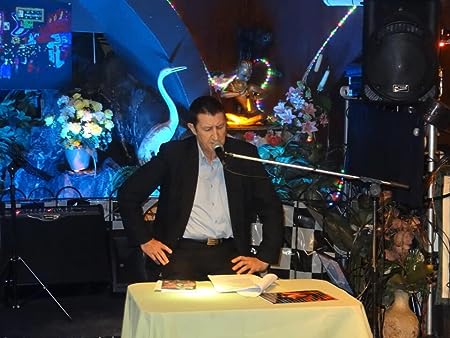 "I stand by my assertion that Gartland is by far the best of all the expatriate writers in Southeast Asia."

Englishman, John Gartland, novelist, poet, university professor, and, former fringe playwright, has travelled widely, and had many occupations, from steel worker to Sales Director, since his Master's Degree in Elizabethan and Shakespearian Drama.

Lizardville Productions published, in 2015, "Bangkok, Heart of Noir" as an e-book, on Kindle, a collection of John Gartland's poetry and Chris Coles' vivid expressionist paintings from the Bangkok night. It is a memorable and visually thrilling evocation of that glamorous, and dangerous city, which has become the undoubted centre of Asian Noir.

John's poetry and readings have earned him the tag, The Poet Noir, and he thrives on live performance. His first collection of poetry, Gravity's Fool (Assumption University Press) from 2007, has been reprinted numerous times.

His second collection, Poetry without Frontiers, a joint publication with Irish poet Tom Hodgins, was also published by A.U.P. and launched in 2008, in Ireland.

Blanc et Noir, a collection of John's poetry and the photography of Mark Desmond Hughes, appeared from Lizardville Productions on Amazon, in June 2016.

In 2019, a collection of John's poetry appeared in a book by Kevin S. Cummings called Different Drummers (Amazon) which also featured articles by Cummings on a range of other writers. John Gartland's poetry won him this review.

"I stand by my assertion that Gartland is by far the best of all the expatriate writers in Southeast Asia." 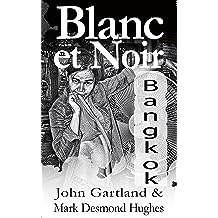 "All the voices, demolition.
Some areas completely gone.
The Garden of Sad Concubines
was turned into a Tussaud franchaise.
‘Course, Tussaud began modeling
with the Terror’s severed heads.
Now TV works as guillotine instead,
and millions get the treatment.
Think you haven’t been beheaded, sucker?
Just try nodding your agreement."

The collection spans London to Bangkok... and out beyond forbidden City Limits,

to the cynical voice of The Eye,

"Man, I’m an ex-Private Eye, I can strike a cool pose
while listening to others’ production-line prose,
self-published wunderkinds who believe their own hype,
burned-out actors on valium bogarting the mike,
tales of drug-hauls and bar girls and crooked police,
and hard-drinking dicks who’ve adopted the east."

to the outlandish world of Tarzan in Rehab,

"Sure, freelance Janes come fly with me,
up high, beneath the canopy. We like it,
getting naked, being free; and
they never want to question my reality,
And none of them are circumcised."

and the analyst's couch of William James, in Smokescreen,

" Next frame I’ve found, is me, in diving gear,
in some villa pool, serenely purging my regulator,
and emerging, occasionally, for a smoke.
Others were with me. No idea who.
I feel now that my entire mind
and I had been abducted by aliens,
and this smear of memory's but
the sad banality of my induction.

This is someone else's sad banality, not mine!

....and those shadowy, half-forgotten bars, from Casework,

"Night paints me in X rays,
a handprint on the cave wall,
watcher on the street of fortune tellers;
thoughts spread like arcana
on electric black.

These are whispers of the Van Allen Belts,
precursors of forgetfulness,
glowing road-signs to oblivion.
The sonorous monotone of German Jack
says something like,
“Wake up and take the wheel.”

And, sometimes, there's Nothing but the River,

"And so it rolls, on fragments of the true cross, relics,
icons of the hit man, opaque lines of Nostradamus,
over semtex parcels in a bloody flag, and tracts,
and bloody patriots, malignancies and effluent;
bin liners, holy books and body bags, lost booty and
contested turf and cover ups. So much corrupted evidence,
so many perfect crimes."

or the journey to the peace of White Sands, Elephant Island,

"The rooms above are open to the air.
Look out, and listen there, to lapping of the playful tide.
And for some grateful future date, I’d memorise
that fiery extinction of the day outside,
this sudden transformation to a silky, island night.
Read more
Other Formats: Paperback 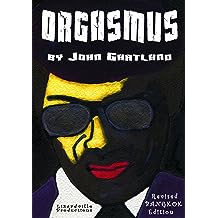 Orgasmus: Trouble is coming. Mar 19, 2015
by John Gartland
( 3 )
$1.50
In a world seemingly intent on its terminal crisis, the weirdest things just happened to Brian Carver, as he creatively subverted a boring government job. Things like the dangerous embraces of Suzanna, his recruitment by Orgasmus, and involvement in the hottest product launch in history. Since mediaeval times, a continuing struggle of secret organisations has boiled beneath the surface of events. Now, it is computed, from all the social and economic data, that, unless man is saved by some unheard-of shift in his psyche, time, for the species, is fast running out. The enemies of Orgasmus, active in extreme groupings of the Left, and Right,, and in political and economic dynasties, have already loosed their assassins. The "Sword of God" has been unsheathed. As for Carver, suddenly a fugitive from police, MI5, and assorted fanatics, the joke is on him. He can never go back to his old life, if he survives at all.
Read more 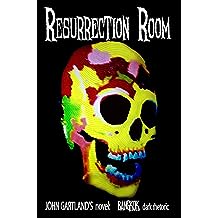 Resurrection Room: Bangkok: dark rhetoric Apr 14, 2016
by John Gartland, Peter Klashorst
( 3 )
$3.75
Professor Poltergeist had sighed and resigned himself to problems yet to come. Now, waist-deep in Soi Nana, reading the cards, he was unsurprised to find The Moon ascendant.
The elevator soared to required altitude over the Asok skyline and Nadia stepped out. To a heavenly Chinese portal in the clouds where a beautiful maid welcomed her with that celestial cocktail. Flicker of an adjacent storm on black and gold lacquer of the inner door. Musk and incense. Fadetoblack.
In Munslow’s Eatery, where treachery, greed and lust were main courses, and drunken westerners were eating their re-heated sins from the naked bellies of harlots, the phone rang insistently in Angelis’ pocket. Black Dress said there was a problem. Lucifer’s Child had been pulled by the cops. Apropos of releasing her, they required the foreigner and his ATM cards. Naturally, Angelis felt guilty. His sins had begun eating him. Lucifer’s Child, meanwhile, was eating every cop in Thong Lor police station, in the first installment of her release plan. 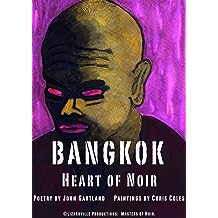 Bangkok, Heart of Noir.: Poetry by John Gartland. Paintings by Chris Coles. (Masters of Noir) Sep 27, 2015
by John Gartland, Chris Coles
( 2 )
$3.75
This unique collaboration brings together two of the leading talents of the burgeoning Bangkok creative scene.
English poet, John Gartland has won an enthusiastic following among poetry fans and other Bangkok writers, with eloquent public readings of his poetry around the city in recent years.
The paintings of American Expressionist painter, Chris Coles, grace the walls of some of the city's premier night spots, as well as those of private collectors. His brilliantly coloured works exhaustively explore the darker realities of the Bangkok night. The two artists forged a strong working relationship first of all through collaborations on "Poetry Universe", John Gartland's Facebook poetry page, and
this current Masters of Noir collection, assembled by Lizardville Productions, is a vivid exploration, in their striking poetic and visual imagery, of Bangkok, the dark centre of Asian Noir.
Bangkok, city of erotic glamour, and explosive political instability, is a seductive and dangerous mistress. Its pleasures are addictive and its streets merciless. Beggars and streetwalkers stalk a world of designer-label shopping malls cheek by jowl with vicious slums. Criminal mafias and corrupt officials seem interchangeable in a kingdom of glittering palaces, semi-feudal hierarchies and military coups. Free speech is ruthlessly curtailed in a world where Buddhist monks become cynical multi-millionaires, and the drug trade reaches to every corner of this hot, dangerously hot city. And everything, but everything, is for sale. This is the sexy, scary, and irresistible, "Bangkok, Heart of Noir".
Read more