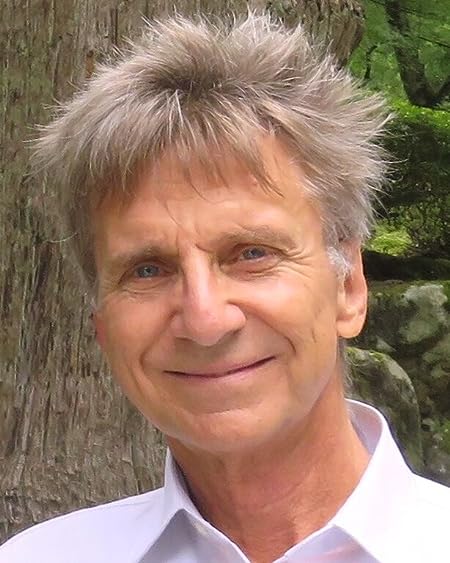 John Rachel has a B.A. in Philosophy, is a novelist and established political blogger. He has written ten novels, three political non-fiction books, a collection of anecdotes about living in Japan, and a fantasy/travel/cookbook about the dietary preferences of mermaids. His political articles have appeared at OpEdNews, Counterpunch, Greanville Post, Dissident Voice, Popular Resistance, Nation of Change, and other alternative media outlets.

Since leaving the U.S. in 2006, he has lived in and explored 34 countries. He is now somewhat rooted in a traditional, rural Japanese community about an hour from Osaka, where he lives with his wife of four years. Daily he rides his bicycle through the soybean fields and rice paddies which sprawl across the surrounding landscape, and experiences infinite delight in the ringing of temple bells three times a day at a local Shinto shrine. These days he's mostly immersed in good vibrations.

You can follow his writing at https://johnrachelauthor.com and the evolution of his world view at: https://jdrachel.com 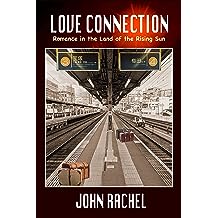 Love Connection is unlike any love story ever told. The “lovers” don’t even meet until the final pages of the book. Though they live in Japan, their “romantic adventure” spans three continents. What eventually happens to them is truly mind-blowing and based on actual events. 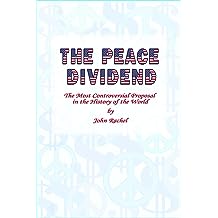 The Peace Dividend: The Most Controversial Proposal in the History of the World Sep 25, 2016
by John Rachel
( 7 )
$6.45
With the collapse of the Soviet Union in 1992, American citizens were promised a "peace dividend", i.e. less money for war, more for peace and a good life for all. The U.S. military under misguided leadership has attacked eight countries since then. The defense budget has exploded, buying a lot of junk that doesn't work and military hardware we don't need.

This is not pocket change. The fraudulent wars and waste by the military amounts to no less than $4.82 trillion! This is money U.S. citizens paid as taxes in good faith, trusting their leaders were telling them the truth. They weren't. They lied to us! The $4.82 trillion was taken under fraudulent terms, and squandered.

Our "peace dividend" is now due and payable. This equates to $14,952 for each and every living U.S. citizen. A family of four will get a refund of over $59,800. This short book explains how we can get our money back and put America back on a path of peace and prosperity for future generations.
Read more
Other Formats: Paperback 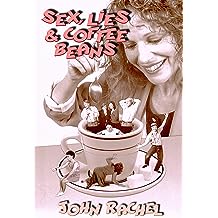 Sex, Lies & Coffee Beans Dec 18, 2020
by John Rachel
( 5 )
$2.99
It was the early 90s. The usual number of people were suffering from plunging self-esteem. For the past decade, the book shelves had been bursting at their pressboard seams with every conceivable fix. Psychiatrists were booked up for months. Gurus were turning them away at the door. Lifestyle coaches were rolling in dough from workshops, book sales, self-help tapes, videos, tête-à-têtes, seminars. High priests, low priests, monks, ministers, astrologers, palmists, psalmists, phrenologists, hypnotists, aura readers, astral pocket jockeys, harmonic wave surfers, all were the rock stars of a new age of enlightenment. But the zaniest of all of the obvious signs that the world had gone completely mad and people would embrace just about anything or anyone in a desperate attempt to conjure up the NEW YOU, was the lady we will meet in this book. Unorthodox? How about Alice in Wonderland strange. Weird. Off the charts. Barking mad. Totally whack. We’re talking about … Dr. Joy Smothers, the folk singing psychologist. This is her story. This is how it all began!
Read more
Other Formats: Paperback 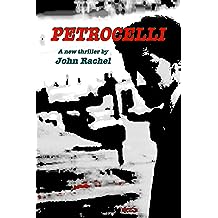 Petrocelli Oct 30, 2015
by John Rachel
( 34 )
$5.99
A "riveting" crime thriller about human trafficking and sex slavery set in America and southeast Asia, Petrocelli is not for the timid or faint-hearted.

Lenny Petrocelli had always been a slacker, a mediocre low-life, getting by on his good looks and street smarts. One day he woke up. Entangled by his gangland bosses in the web of child prostitution and human trafficking, he was being set up as the fall guy to take the rap, if the horrifying but lucrative enterprise went down.

Seeing the violence and abuse young girls from Asia were subjected to in the gruesome world of sex slavery, Lenny did the most difficult but the most important thing in his entire life: He became a better person. Now he would risk everything, even his life, to put an end to this savage exploitation.

Peer into this awful world. See it through Lenny’s eyes. Discover what’s possible even in the face of the worst, most pernicious evil and cruelty.

Embrace the promise of redemption and the power of love.

If this gritty novel rings true, it’s for good reason. “Petrocelli” is based on actual stories from a violent and gruesome under-world, where millions of children and adolescents across the globe are held in bondage as slaves. 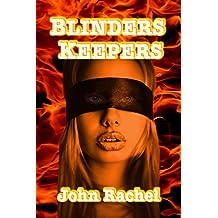 Blinders Keepers Dec 14, 2015
by John Rachel
( 30 )
$5.99
In this social-political satire, a young man who escapes his hayseed hometown in Bible-Belt Missouri is mistakenly hunted down by the national security agencies as a terrorist, while the President plagued by an America in chaos and collapse perpetrates an end-of-the-world hoax, in a desperate attempt to get himself re-elected.

Blinders Keepers is humor and commentary in the tradition of Jonathan Swift, Kurt Vonnegut and Joseph Heller, but revved up and spit-shined to take on the historical new levels of absurdity and dysfunction of the 21st Century.
Read more
Other Formats: Paperback 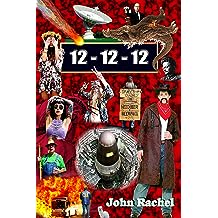 12 - 12 - 12: Book 2 of John Rachel's End-of-the-World Trilogy Dec 7, 2015
by John Rachel
( 4 )
$5.99
"12-12-12" is the story of a great nation falling apart and one young man’s quest for meaning in the midst of chaos. It takes the stuff of reality and pitches it to a high scream. Open your mind but cover your ears. Knowledge is bliss but it’s loud and painful. Yet somehow still funny. "12-12-12" manages to tell it like it is by telling it like it isn't. Granted, this is not what actually happened during 2012. But what unfolds is not more implausible. Nor is it less implausible. It's dark, ironic, witty, at times surrealistic and just plain weird. One reviewer calls it "laugh-out-loud brain food for hungry minds."
Read more
Other Formats: Paperback 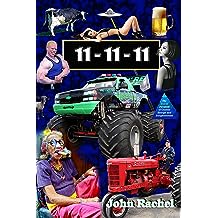 11 - 11 - 11: Book 1 of John Rachel's End-of-the-World Trilogy Nov 23, 2015
by John Rachel
( 10 )
$5.99
11-11-11 is the ultimate feel good story. After you get a load of the pathetic lives of the citizens of hayseed Bible-belt Pulnick, Missouri, you'll feel really good about your own life! The town, already full of misfits, losers, and crazies, in the grips of paranoia that the world will end on November 11th, exploited by dodgy spiritualists and local politicos, are now victims of an invasion of white supremacist meth heads from Texas. 23-year-old Noah Tass was totally fed up, and desperate to escape. But in this novel, a little whiff of desperation can be a lungful of laughing gas.Will Noah finally make it out of Pulnick to begin a new life journey that actually makes sense? The answers to this and many other questions you probably never thought to ask lurk between the covers of this strange, thought-provoking, sometimes disturbing, morbidly hilarious, literary spoof.
Read more
Other Formats: Paperback 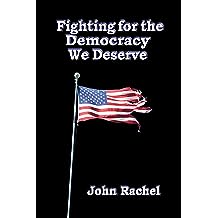 Fighting For The Democracy We Deserve Sep 7, 2015
by John Rachel
( 2 )
$5.99
This is a manual for constructive voting in the 2016 and 2018 elections. It presents a concrete plan for wresting control of the country and our democracy back from the rich and powerful, and restoring the constitutional mandate of government of the people, by the people, and for the people.

There is a financial reward for saving America from authoritarian rule by the corporate elite. If voters unite behind the strategy contained in this short book, each and every U.S. citizen will end up $14,084 richer. 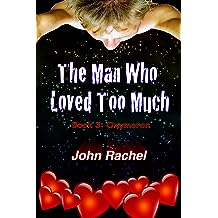 In this, the final book of the trilogy, we find out what it means to be a "man who loves too much". More importantly, we discover if Billy Green is such a man.
Read more
Other Formats: Paperback 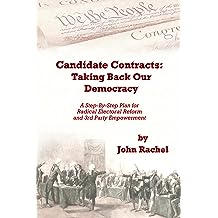 Candidate Contracts: Taking Back Our Democracy: A Step-By-Step Plan for Radical Electoral Reform and 3rd Party Empowerment Jun 7, 2015
by John Rachel
( 2 )
$7.99
Prepare to understand contemporary politics as never before! Prepare to see the future of American democracy!

A recent study at Princeton University came to a shocking conclusion. Our system has been so corrupted by money and influence peddling, America is no longer a democracy.

This manifesto offers a detailed, step-by-step plan for cleaning up the corruption in Washington DC, replacing the current crop of pay-for-play politicians with progressive, independent, minor-party candidates, who will be bound by legal contract when elected, to faithfully serve the interests of the voting public.

This is electoral reform so radical that in one master stroke, it puts America on the path to a healthy economy and directly addresses its #1 and #2 challenges: the suicidal march to war and the destructive impact of a historically high level of wealth inequality.

Brace yourself for a real game-changer which will redefine politics for the foreseeable future. Get ready as the nation begins its journey toward a peaceful and abundant future for all of its citizens, not just a privileged few.
Read more
Other Formats: Paperback 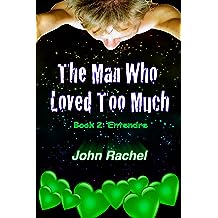 He was more determined than ever to find meaning in life and comfort in love.

Billy came to know one thing for sure.

He could now with the absolute cocksure confidence of pure enlightenment, scoff at the naysayers and spit in the face of the purveyors of romantic nihilism, the cynics who say that love is an illusion.

Billy knew the real score.
Love is the light that never dims.
Love is a wine that flows in our hearts.
Love is a wonder that has no beginning or end.
Love is a master key that opens the gates of perfection.
Love is the language our souls use to speak to one another.
Love is the trafficking of fantasies and transcending of mortality.
Love is an energy that can neither be created or destroyed.
Love is God Allah Yahweh Shiva Qat Aphrodite.
Love is touch smell feel taste listen pray.
Love is the poetry of the senses.
Love is metaphysical gravity.
Love is the gift of oneself.
Love is sweet tyranny.
All you need is love.

Yes. That’s how it should go.
I love, therefore I am.

But does it ever turn out the way we planned? The way we hoped and dreamed?
Read more
Other Formats: Paperback 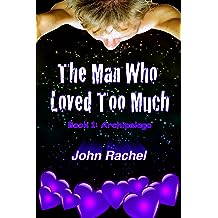 The Man Who Loved Too Much - Book 1: Archipelago Nov 9, 2014
by John Rachel, Archimedes Delusio III
( 38 )
$5.99
Poor Billy Green! When he was just turning four, his father tried to throw him in the trash. He was a smart kid but that just seemed to create enemies. His mom did everything to protect him. But this was Detroit, armpit of the wasteland! Catholic school didn’t help much, except the time he got his first kiss from an atheist nun. Home life was dismal. Was his father capable of anything but drinking beer and farting? And what was with that neighbor who made puppets and tried to molest Billy? Golly! Detroit was sucking the life out of him. At such a young age. Then adolescence swirled around him. Like water in a toilet bowl. High school was a B movie. Only without a plot. So finally he did something about it. Billy ran away … to college. Cornell University. That was a good move for sure! He studied hard, lost his virginity, met the love of his life. Things were definitely looking up! What could possibly go wrong?
Read more
Other Formats: Paperback