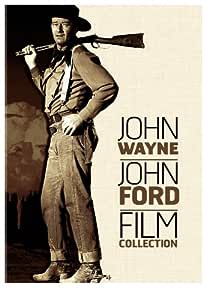 JOHN WAYNE-JOHN FORD FILM COLLECTION Collection Includes: THE SEARCHERS TWO-DISC SPECIAL EDITION - Wayne’s favorite role. And, many say, Ford’s best film. “About as good as Hollywood filmmaking gets…a true American masterpiece” (The Movie Guide). THE WINGS OF EAGLES - A compassionate biopic salute: aviation pioneer “Spig” Wead (Wayne) overcomes tragedy to forge a Hollywood career. Maureen O’Hara co-stars. FORT APACHE - They’re duty bound to obey. But Wayne and other cavalrymen are at odds with the orders of ramrod commander Henry Fonda. Shirley Temple co-stars. 3 GODFATHERS - The tale of the Magi – Western style. Fugitive bank robbers won’t abandon the infant entrusted to them, even though caring for him dims their chances of escape. SHE WORE A YELLOW RIBBON - Another Ford masterpiece of mood and heroics. An aging officer (Wayne) who knows the agony of war seeks to make his last mission one of peace. Academy Award (1949): Best Color Cinematography. THEY WERE EXPENDABLE - Wayne and Robert Montgomery are PT-boat skippers in “one of the finest (and most underrated) of all World War II films” (Leonard Maltin’s Movie Guide). Bonus Documentary Disc – First Time on DVD: DIRECTED BY JOHN FORD - Peter Bogdanovich’s groundbreaking tribute to the filmmaker, restored and reedited to include more classic clips and insightful anecdotes from Clint Eastwood, Katharine Hepburn, Martin Scorsese, Steven Spielberg and more contemporary cinema giants.

BRIAN'83
5.0 out of 5 stars beautiful cinematography, solid acting
Reviewed in the United States on August 31, 2016
Verified Purchase
If you're a person who enjoys Westerns,beautiful cinematography,solid acting,and straight-forward dialogue;it's hard to beat a Wayne-Ford collaboration!The film's they did together are represented nicely here. The westernWesterns are some of the best EVER made;as for the others: They We're Expendable-Wayne & cast do a believable job as patrol/small strike boat crews in the Pacific,during WWII. The Wings Of Eagles is a departure for Wayne,in a "mostly dramatic-almost- everyday character role....but there's the added bonus of interaction with Maureen O'Hara....which was always Big-screen magic. Most of you may not be familiar with all these films but, HIGHLY RECOMMENDED! You even get a six disc that gives insight to the great director John Ford. A must for your DVD collection;from 2 icons,spanning films(1940's-1970's).
Read more
4 people found this helpful
Helpful
Report abuse

Elder
5.0 out of 5 stars Elder
Reviewed in the United States on January 31, 2015
Verified Purchase
This is a great cooection for John Wayne fans.
Even if your not a fan and just like cowboy movies you'll surely enjoy this set.
Elder
Read more
One person found this helpful
Helpful
Report abuse

Santa Barbara Jim
3.0 out of 5 stars You get what you poy for
Reviewed in the United States on November 2, 2016
Verified Purchase
Not complete and not all Ford/Wayne movies are worth seeing. Not complete. Bargain price shows - Quality of Searchers is not the best.
Read more
Helpful
Report abuse

ghostwriter
5.0 out of 5 stars All of the Duke's best
Reviewed in the United States on February 20, 2014
Verified Purchase
with John Ford. If you want a great John Wayne collection, this is something to consider. Wings of Eagles is one of Wayne's different movies and the rest are all of his best.
Read more
Helpful
Report abuse

A Little ol' gal from "Jaw-Ja"
5.0 out of 5 stars Great set of DVDs
Reviewed in the United States on July 18, 2014
Verified Purchase
Some of the best movies ever made and the DVDs are great quality.
Read more
2 people found this helpful
Helpful
Report abuse
See all reviews

William Wren
4.0 out of 5 stars Great - but no Stagecoach in the set
Reviewed in Canada on August 9, 2006
Verified Purchase
This is a great collection but take note: In Canada, this set DOES NOT include Stagecoach Two-Disc Special Edition (or any other edition of Stagecoach). While in the U.S. the set is an 8 movie set, in Canada there are only 7. I've no idea why that is.

I would give the set 5 stars but that serious omission drops it down to four.

On the other hand, The Searchers looks great in this new, restored transfer.

By the way ... if anyone knows why Stagecoach is missing from the Canadian set, please let us know.
Read more
11 people found this helpful
Report abuse
See all reviews