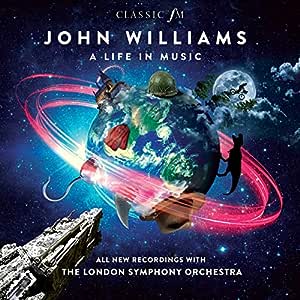 John Williams: A Life In Music

John Williams: A Life in Music celebrates the London Symphony Orchestra's collaboration with John Williams that spans over 40 years, going back to Star Wars in 1977. Out May 4 (International Star Wars Day), this release features Williams's most iconic film scores, including the LSO's first ever recording of "Hedwig's Theme" from Harry Potter as well as a world premiere recording of the Theme from Schindler's List for solo cello.

David RoweTop Contributor: Classical Music
5.0 out of 5 stars I'm not sure we really needed this. But it's gloriously played and has lovely, plush sound.
Reviewed in the United States on May 10, 2018
Verified Purchase
Here we have yet another release of the usual John Williams fare. It is not conducted by John Williams, a fact Decca seems to go out of its way to conceal. But it is played by the London Symphony Orchestra, and their effortless virtuosity, along with sweetly, singing tenderness, are everywhere on display. This collection is conducted by Gavin Greeaway, known almost solely as a studio conductor of film soundtracks of other composers's scores for the movies themselves. And to be fair, he brings a symphonic grandeur and plenty of flair to these familiar themes. The only track unique to this collection is an arrangement of the Schindler's List theme for solo cello rather than the usual violin. It's fine; nothing special, despite heartfelt playing by the LSO's principal cellist.

The sound is plush and expansive, perhaps revealing this recording was made in joint partnership with FM Classics. It sounds much more like an FM Classics recording than a Decca one. It is rich, warm and smooth, in a glowing and spacious acoustic. The highlight here is the playing of the LSO, which is truly fabulous. However, John Williams's own Boston Pops recordings (for SONY and Philips) have more life and an immediate presence that this Decca tends to smooth over.

One nice touch, however, is that the booklet includes quotes from featured members of the orchestra for each track. These do not seem "scripted" or shallow; rather, they express sincere admiration for the genius of John Williams as a composer and reveal how rewarding his scores are to play.

In sum, I'm not sure we really needed this recording. If you already own any of John Williams' own recordings of these themes (with the Boston Pops), there is absolutely no reason to buy this new release. With just 10 tracks totaling 50 minutes' playing time, this is hardly "A Life In Music", as Decca wants you to believe they have here. However, it is offered at slightly less than full price; and with spectacular playing and beautiful recording quality, it is tempting and not likely to disappoint.

M.H
5.0 out of 5 stars Luxerius perfrormance
Reviewed in the United States on November 14, 2018
Verified Purchase
Usually i like Gerhardt work for Star Wars, luxuries, royalty and perfection, all years past couldn't find better alternative regarding this part. After listening to this CD i change my mind, the performance is very accurate and precise, also I hear many small details that other conductors missed. Defiantly I will look to his other CD.
As for CD recording it’s very high quality remind me of Telarc recording. Highly recommended.
Read more
Helpful
Comment Report abuse

Michael Schilling
5.0 out of 5 stars An important addtion for any John Williams fan!
Reviewed in the United States on September 28, 2018
Verified Purchase
Although I already have many of the original soundtrack albums for the selections on this CD, it is always a joy to hear the iconic London Symphony Orchestra go full-bore with some of the maestro's most beloved music scores. Any fan of John Williams, or of classic movie scores in general, will experience a huge gamut of emotions listening to this well-packaged and beautifully-executed musical tribute!
Read more
Helpful
Comment Report abuse

Dr. Marie Jureit-Beamish
5.0 out of 5 stars A superb recording of John Williams' 10 most famous tunes from his films
Reviewed in the United States on June 24, 2019
Verified Purchase
The London Symphony Orchestra sounds fabulous in this recording of ten of William's most famous and recognized tunes and themes from ten different films. The 2018 recording is of the finest sound. It is very inspiring! If I had to have but one CD of WIlliams' must it would be this one!
Read more
Helpful
Comment Report abuse

lean
4.0 out of 5 stars Good music always
Reviewed in the United States on October 19, 2018
Verified Purchase
It was a nice variety, really enjoyed it.
Read more
Helpful
Comment Report abuse

The Cello version of Schindler's List was worth listening to, as it is usually played with the violin as indeed it was written for Itzhak Perlman, but I think it suits the cello very well indeed.
Read more
One person found this helpful
Helpful
Comment Report abuse

Dave PS
5.0 out of 5 stars John Williams. In my opinion one of the greatest composers in our modern world.
Reviewed in the United States on June 25, 2018
Verified Purchase
John Williams is a remarkable composer.
Read more
Helpful
Comment Report abuse

JonTurtle
3.0 out of 5 stars Disappointed
Reviewed in the United Kingdom on November 20, 2018
Verified Purchase
Expensive for number of tracks.
Read more
Helpful
Sending feedback...
Thank you for your feedback.
Sorry, we failed to record your vote. Please try again
Report abuse