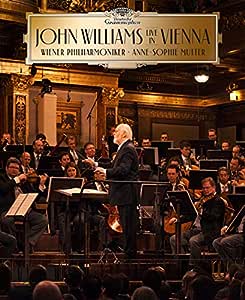 $32.55
& FREE Shipping on eligible orders. Details
Sold by: STMedia Group
$32.93
+ Free Shipping
Sold by: i-Deals Store
Have one to sell?
Sell on Amazon

John Williams/Anne-Sophie Mutter/Wiener Philharmon (Artist) Format: Audio CD
4.8 out of 5 stars 550 ratings
Amazon's Choice recommends highly rated and well-priced products.
Amazon's Choice for "john williams in vienna blu-ray"
See all formats and editions Hide other formats and editions
Available at a lower price from other sellers that may not offer free Prime shipping.

DG presents John Williams in Vienna, the live recordings of the Hollywood legend's Vienna Philharmonic 2020 debut. Saying it's "one of the greatest honors of my life," he received a standing ovation before a single note was played. Sharing the stage with the famous orchestra and violinist Anne-Sophie Mutter, he performs iconic themes from Star Wars, Harry Potter, Indiana Jones, Jurassic Park and other cinematic landmarks that have earned countless awards: 5 Oscars, 5 Emmys

4.8 out of 5 stars
4.8 out of 5
550 global ratings
How are ratings calculated?
To calculate the overall star rating and percentage breakdown by star, we don’t use a simple average. Instead, our system considers things like how recent a review is and if the reviewer bought the item on Amazon. It also analyzes reviews to verify trustworthiness.
Top reviews

J. Bevan
5.0 out of 5 stars A joy to watch & hear...
Reviewed in the United States on October 23, 2020
Verified Purchase
I found this concert to be quite amazing at many levels. I go to a lot of orchestral concerts beginning in 1958(!) in many venues around the world. I have been inside the Gold Hall of the Musikverein in Vienna where this takes place but have never heard a live concert there. Most people will recognize it as the location of the annual New Year's concerts live from Vienna. Personally, I also have a number of Leonard Bernstein concert videos recorded in that location. John Williams with the Vienna Philharmonic may not be the most predictable combination in the music world, but it worked very well and there seemed to be more than mutual respect between conductor and orchestra. This was apparently Williams' first visit to Vienna (which was a little surprising to me). It came about, somehow, because the late Andrè Previn (with whom Williams had worked in Hollywood) introduced John to Anne-Sophie Mutter (Previn's wife at the time) and she apparently got Williams together with the Vienna Philharmonic (those details of that alliance are not clear). So he was scheduled for an earlier concert which he could not make due to health reasons and this one finally took place just before lockdown in January, 2020. The orchestra plays the music beautifully and Williams seems be be enjoying the entire experience. The audience is on its feet multiple times...including before the first note is played...and goes literally bonkers when he encores with the Imperial March (from Empire Strikes Back). So a good time is had by all. (European audiences are not nearly as prone to standing ovations as we here in the states.) The concert is very generous in length. Mutter plays about 8 pieces, I think, only one of which is on the CD (because the others were released last year on the CD "Across the Stars" which was recorded in Hollywood). Anne-Sophie seems as excited about the entire proceedings as anyone and attacks her parts with her usual virtuosic gusto. I have no complaints. To me it is touching that a living American composer can have such a following (and a very enthusiastic one, at that...) so far from home. John is apparently writing a violin concerto for Anne-Sophie, so I'll look forward to that...at a future date...I hope. He describes her as "the greatest violinist her country has produced in the past 100 years" ... I've followed her since she was a teenager and wouldn't dispute that assessment. Highly recommended all around.
Read more
9 people found this helpful
Helpful
Report abuse

Davis Hall
5.0 out of 5 stars Beautiful recording, Get the Blu-Ray Deluxe Edition
Reviewed in the United States on November 7, 2020
Verified Purchase
The Blu-Ray has some music not on the CD, plus a conversation between Anne Sophie Mutter and John Williams. This is a treat because they've worked together, and are very relaxed. ASMutter asks JWilliams the kinds of questions you might ask. The audience in Vienna is remarkably quiet during the playing. The Blu-Ray has several audio options. Don't pass this up no matter how much of William's music you have.
Read more
5 people found this helpful
Helpful
Report abuse

R. Gong
5.0 out of 5 stars John Williams Conducts The Vienna Philharmonic
Reviewed in the United States on October 15, 2020
Verified Purchase
When you put John Williams in Vienna, conducting their renowned orchestra, it’s magical. The concert was magnificent. Mr. Williams had the Vienna Philharmonic perform many of his iconic compositions from Close Encounters, Indiana Jones, E.T. to Harry Potter and Star Wars, and there’s a lot more. If I have any gripe, it’s that I wished he would’ve included his music from Superman and his infamous 2-note Jaws theme. Either way, this is a great concert from a giant in cinematic music, and it’s a great Blu-Ray to have. The audio is excellent. Plus, the package includes a CD of most of the concert performance.
Read more
3 people found this helpful
Helpful
Report abuse

Judith Hubbard
5.0 out of 5 stars If you love John Williams' music you have to get this
Reviewed in the United States on October 7, 2020
Verified Purchase
it is a wonderful, historic musical event. I urge those who love music, purchase this item. Great sound, great filming, great music, great conductor
Read more
4 people found this helpful
Helpful
Report abuse

H A.
5.0 out of 5 stars Outstanding at every level.
Reviewed in the United States on October 11, 2020
Verified Purchase
Williams himself, the Vienna Philharmonic, the camera people, and the sound recording and engineering for a live event is the best I've ever heard and seen on a concert DVD.
Read more
3 people found this helpful
Helpful
Report abuse

Brett V.
5.0 out of 5 stars Likely one of the last great live appearances, but yikes! SA-M
Reviewed in the United States on November 28, 2020
Verified Purchase
How splendid. What a lovely performance by the maestro. Gorgeous blu ray. Splendid job on the audio.

Best rendition of the Imperial March i've heard in years.

It's a shame Anne Sophie-Mutter had to ruin the Harry Potter theme. No wonder they didn't include it on the cd.

Royal Showing
5.0 out of 5 stars SHOULD be a 10, THE BEST CONCERT, I HAVE EVER HEAR, ATMOS is REALLY a STANDOUT, JOHN WILLIAMS A++++
Reviewed in the United States on December 17, 2020
Verified Purchase
VIENNA VENUE is PERFECT for CONCERT. THE CONCERT BIG and FULL. A TREASURE for the EAR. OUTSTANDING.
Read more
Helpful
Report abuse

cp
5.0 out of 5 stars Includes Blu-Ray
Reviewed in the United States on January 12, 2021
Verified Purchase
Since it's a little unclear, wanted to share that this does include a Blu-Ray disc with an Atmos track. Great concert and sound mixing.
Read more
Helpful
Report abuse
See all reviews

Customer review
5.0 out of 5 stars Golden Legacy of John Williams Beautifully Recorded
Reviewed in the United Kingdom on August 14, 2020
Verified Purchase
Considering the prolific output of John Williams over the decades not only as a composer but also as a conductor on stage, it is surprising that there has not been any commercially available video recording of him conducting complete pieces of his own concert music...until now. Indeed a wait well worthwhile! And what a way to commemorate his achievements and contribution to contemporary classics than with this wonderful recording and long awaited collaboration with the Vienna Philharmonic.

These rescheduled concerts were held in Jan 2020 and John Williams' visit to Vienna was a cultural inspiration for the composer, orchestra and fans alike. Bringing home the classic tradition of American film music history of the likes of Steiner and Korngold back to its roots was a homecoming in its own right. John described the privilege working with the Vienna Philharmonic and playing in the Musikverein as an inspiration.

The selected programme includes the major film score themes as well as some subthemes, most in the full orchestral concert arrangements (Hook, Close Encounters, ET, Jurassic, War Horse, Jaws, Marion's, all Star Wars Tracks, Raiders) and a few arranged for violin as played by Anne Sophie Mutter (Harry Potter, Sabrina, Donnybrook, Eastwick, Cinderella, Tintin, Schindler's). The recording is beautifully done both in the video and audio format by the excellent DG team. The video includes the short anecdotal gems John Williams shares with the audience between pieces of his music, just like being in the actual concert itself. Full encores are included and notice he had a rapturous standing ovation even before he started playing! Thus the feel is very much a live concert, although the recording quality is first class with great acoustics of the hall well captured. Spacious, detailed and warm, the excellent engineers have done a great job capturing the nuances of the music encompassing the whole orchestra.

The Deluxe Edition comprises of a Blu Ray video recording of the whole concert and an audio CD. The CD only contains 13 (all orchestral versions plus one ASM track from Eastwick) of the 19 titles seen on Blu Ray and audience applause has been edited out so you can enjoy the music on its own. The Blu Ray has DTS HD Master 2.0, DTS HD Master 5.1 and Dolby Atmos 9.1.4. Also features a 27 minute chat between ASM and JW including his preparation for the concert, his visit to Vienna and music traditions grounding film scores. Also comes with a colour booklet with programme. Compliments to Michael Beyer for doing a great job following the music programme, players, conductor and capturing the electricity of the live concert plus audience reaction.

This video concert recording of the legend himself conducting his most well known pieces, in collaboration with one of the finest orchestras in world and played in one of the most beautiful concert halls in the world is a dream come true. The whole production is well worth its weight in gold. If you are a true fan then this is what you have been waiting for!

Highly recommended. A joyous collaboration and momentous concert of John Williams' legacy beautifully recorded and produced. Let's also hope DG would release it in 4K (if not 8K) in the future!
Read more
14 people found this helpful
Report abuse

d.s.roxburgh
5.0 out of 5 stars Good price!
Reviewed in the United Kingdom on September 26, 2020
Verified Purchase
Arrived on time and as described plus almost half the price as it was.
Read more
Report abuse