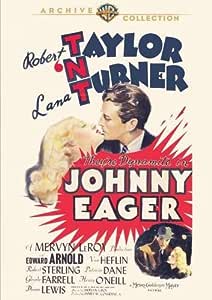 Lana Turner ("Peyton Place," "The Postman Always Rings Twice") stars as the daughter of a prominent D.A. who is manipulated by gangster Robert Taylor ("Ivanhoe," "All the Brothers Were Valiant") when she falls head over heels for him. Van Heflin ("Shane," "The Three Musketeers") received an Academy Award as Taylor's alcoholic confident. With Edward Arnold ("Mr. Smith Goes to Washington"), Robert Sterling ("Show Boat"), Emmy-winner Glenda Farrell ("Kissin' Cousins"), and Barry Nelson ("The Shining"). Directed by Oscar-winner director/producer Mervyn LeRoy ("The Wizard of Oz," "Little Caesar").

4.8 out of 5 stars
4.8 out of 5
43 customer ratings
How does Amazon calculate star ratings?
Amazon calculates a product’s star ratings based on a machine learned model instead of a raw data average. The model takes into account factors including the age of a rating, whether the ratings are from verified purchasers, and factors that establish reviewer trustworthiness.
Top Reviews

Rita Reader
VINE VOICE
5.0 out of 5 stars Film noir that will never disappoint! A keeper shelf delight.
Reviewed in the United States on May 11, 2019
Verified Purchase
This is old Hollywood at its best! I adore the chemistry between Taylor and Turner. They smoulder enough heat to melt the wax off a Dixie cup in each glance at twelve paces! And Van Heflin gives a rock solid unforgettable performance even as a second banana. Lana Turner manages to turn Taylor's Johnny into mush. Keep your Kleenex handy. This is a film you will watch again and again.
Read more
2 people found this helpful
Helpful
Comment Report abuse

REG- 'El-Choya' -THEKAT
4.0 out of 5 stars GLOSSY MGM GANGSTER FLICK
Reviewed in the United States on October 1, 2012
Verified Purchase
MGM HEADED INTO WARNER BROS.TERRITORY AND MADE A GLOSSY AND SLICK GANGSTER FILM.VAN HEFLIN STEALS EVERY SCENE HE IS IN AND LANA TURNER AT HER SEXIEST .SHE WAS NO GREAT ACTRESS IN THIS FILM BUT SHE PHOTOGRAPHED BEAUTIFULLY.THE PHOTOGRAPHY IS BRILLIANT ,LOT OF NIGHT SCENES THE BEGINNING OF FILM NOIR.TAYLOR GOT OUT HIS GREAT LOVER ROLES AND BECAME A TOUGH GANGSTER AND SPORTED A SMALL DARK MOUSTACHE HE WORE EVER SINCE WATERLOO BRIDGE 1940,AND WORE DARK SUITS,COATS AND HATS IN THIS FILM TO MAKE HIM LOOK MORE SINISTER .TAYLOR WAS NEVER ONE OF MY FAVORITE MOVIE HEROES TYRONE POWER WAS,BUT THIS WAS ONE OF MY FAVORITE ART DECO TYPE FILMS THAT MGM DID SO WELL NOT LIKE THE TOUGH REALSM OF WARNER BROS.CRIME FILMS.
Read more
7 people found this helpful
Helpful
Comment Report abuse

Avid Reader
5.0 out of 5 stars Classic in every way
Reviewed in the United States on July 18, 2013
Verified Purchase
Two star perfomers at the height of their stardom with years more to go - Turner and Taylor are stunning. The whole cast is great. And the story is good. If you care anything about classic Hollywood movies, this one's for you!
Read more
4 people found this helpful
Helpful
Comment Report abuse

Dr. Ronald Schwartz
5.0 out of 5 stars Taylor and Turner are a hot team in this gangster yarn.
Reviewed in the United States on March 11, 2013
Verified Purchase
Gambling is the big problem for the city and Judge Edward Arnold wants to end its existence. But Johnny Eager (Taylor) uses his influences with the judge's daughter (Turner), first falling in love with her and then sacrificing that love for a fake killing in which Turner takes place, pulling the trigger and having a nervous breakdown. Taylor tries to make it right with her, telling her the truth. But the big surprise is Van Heflin's performance as Eager's best friend and drinking buddy who tries to steer Johnny on the right road to redemption. But there is no happy ending here in this 1942 M-G-M early film noir.
Read more
5 people found this helpful
Helpful
Comment Report abuse

KJTRVL
5.0 out of 5 stars Five Stars
Reviewed in the United States on June 14, 2018
Verified Purchase
Arrived quickly and was a great movie!
Read more
One person found this helpful
Helpful
Comment Report abuse

Edward J. Fairchild
5.0 out of 5 stars Love Lana always
Reviewed in the United States on March 9, 2015
Verified Purchase
Love Lana always!!! Great pairing with another legend-Robert Taylor!!! Love the scene where she quote Cyrano deBergerac about the Meaning of a Kiss!!!
Read more
One person found this helpful
Helpful
Comment Report abuse
See all reviews from the United States

David H. Busley
5.0 out of 5 stars Five Stars
Reviewed in the United Kingdom on February 12, 2016
Verified Purchase
One of my favourite films. I an delighted with it.
Read more
Helpful
Sending feedback...
Thank you for your feedback.
Sorry, we failed to record your vote. Please try again
Report abuse

Alex da Silva
3.0 out of 5 stars Johnny Thief
Reviewed in the United Kingdom on May 21, 2011
Verified Purchase
Johnny Eager (Robert Taylor) has a stupid name. He is a reformed criminal who works as a cabbie, only he hasn't done any reforming and pretty much runs the town with politicians and policemen under his influence. The one person who stands against him is John Farrell (Edward Arnold), the prosecutor who previously sentenced him and who is blocking his ability to run a dog-track. Johnny Eager blackmails Farrell by implicating his daughter Liz Bard (Lana Turner) in a murder. I don't know why she's got a different surname to her dad but she does. Anyway, Eager has a change of heart when it comes to affairs of the heart and sets out to kill Julio (Paul Stewart), the man who is integral to the blackmail set-up........and is Eager's one and only friend Jeff (Van Heflin) a homosexual...?

I found that this film went on for too long and it just wasn't very exciting. The cast are all OK but I didn't really connect with Robert Taylor and I felt disappointed with the role played by Lana Turner. I was anticipating a strong female lead role. What a wasted opportunity. She could have given some spunk to this story but she just falls flat. The most interesting character is Van Heflin and he delivers some dialogue gems throughout the film. It's his delivery of these lines that make him an incredibly likable drunk.

There are some interesting scenes, eg, the fake killing, but there aren't enough. The film is OK but it somehow left me feeling a bit detached from the proceedings and I didn't care too much for what happened to any of the characters. I watched it and that was that. I'm keeping onto the film to watch at a later date. Maybe, it's one of those films that improves with a second viewing.