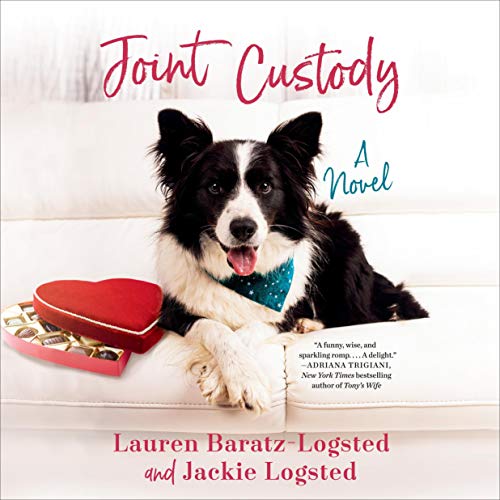 List Price: $24.50
You Save: $3.06 (12%)
By completing your purchase, you agree to Audible’s Conditions Of Use
Sold and delivered by Audible, an Amazon company
Share

A book told from the POV of a dog? Hell yes! Sign me up.

I loved Gatz! The thoughts he was having and the things he did to get his humans back together had me smiling and laughing. He actually went as far as eating a box of chocolates. Yes he knew they could kill him, and while he did not want to die, it was a risk he was willing to take for The Man and The Woman. And if they started to date other people he would do whatever he could to sabotage the dates. They could have meaning’less’ but not meaning’full’ with other people LOL.

I smiled through this whole book. And I will admit I did tear a bit near the end. After reading this book I have a whole new outlook on what is going on in the minds of animals. Hahaha!
And at the end of my kindle book there was an excerpt from the sequel to Joint Custody. OMG! There is going to be a sequel?! When is it coming out? I am definitely reading that. I am so excited.
Read more
3 people found this helpful
Helpful
Report abuse

writeoncindy
4.0 out of 5 stars LOVEABLE GATZ!
Reviewed in the United States on January 27, 2021
Verified Purchase
"What a handsome dog! Would it be all right if I pet him?"

It all begins with a meet-cute between The Man, a writer and The Woman, an editor. The Man is walking home after picking out a darling border collie at the shelter. The Woman stops him and names the dog, Gatz on the spot. It turns out, The Great Gatsby is their favorite book. They become a couple on the spot.

JOINT CUSTODY (Berkley) by the mother-daughter, Logsted team is a story about a very special dog. Gatz brings The Man and The Woman together and does just about anything, well let's just say everything, he eats two-pounds of chocolate, to keep them together. It's told from the perspective of Gatz and he wants the three of them to be a forever family. It could have been gimmicky, but Gatz is a real fleshed out character you can't help but love.

After three years, The Man and The Woman break up. The Man suggests joint custody because he knows The Woman loves Gatz. She gets Monday through Friday, he gets weekends. The Man wants to continue his relationship with The Woman, but he's a bit of a curmudgeon and she's tired of it.

Soon The Woman meets The New Man. He's another writer and wants her to be his editor and more, but isn't that a conflict of interest? More to follow.

The JOINT CUSTODY takeaway for me? "Sometimes, you don't get the happily ever after you hoped for and worked for, or even thought you'd get, but that's okay. Just so long as everyone ends up happy."

This is book one in The Gatz Chronicles. Part of the sequel is at the end of book one to give you a sneak preview of what's next. FYI: The fun continues.
Read more
2 people found this helpful
Helpful
Report abuse

Mary
5.0 out of 5 stars Great Read!!!
Reviewed in the United States on March 23, 2021
Verified Purchase
This was such a fun light read!! I hated for it to end...and I can't wait for the sequel! It is very cleverly written, funny, touching and an all around delightful book!!
Read more
2 people found this helpful
Helpful
Report abuse

Jason Kessler
5.0 out of 5 stars Highly recommended.
Reviewed in the United States on January 15, 2021
Verified Purchase
I thought it was going to be about the ownership of a marijuana cigarette, but I like this better! [joke] Such a unique narrator, and I loved the way the humor kept it light. This book was a ton of fun. Highly recommended.
Read more
2 people found this helpful
Helpful
Report abuse

Kathleen
2.0 out of 5 stars Slow. Sad. Skip This One.
Reviewed in the United States on February 20, 2021
Verified Purchase
Book was slow and sad. I put it down about half way through and I'm a book hound
who almost always finishes every book.
Read more
Helpful
Report abuse

kathleen g
TOP 500 REVIEWER
5.0 out of 5 stars oh the pup
Reviewed in the United States on January 5, 2021
Ok- this is narrated by Gatz the dog. Gatz who wants nothing more than for his people- the Man and the Woman- to get together again. They met on the day the Man adopted Gatz from the shelter; she named him after the Great Gatsby, a book they both loved. Things went well for three years despite their very different personalities but now they've broken up and Gatz spend the week with him and the weekend with her. He plots and plots and does some stupid things (like eating chocolate) that he thinks will propel them into each others arms. What he doesn't count on, though, is that he doesn't know everything about their lives anymore. Is he doing the right thing? To enjoy this you have to go with the idea that Gatz knows social as well as literary references and you know what- that was ok by me. It's got some funny moments (always a plus these days). Thanks to netgalley for the ARC. It's light, it's entertaining, and no spoilers from me on what happens.
Read more
3 people found this helpful
Helpful
Report abuse
See all reviews
Back to top
Get to Know Us
Make Money with Us
Amazon Payment Products
Let Us Help You
EnglishChoose a language for shopping. United StatesChoose a country/region for shopping.
© 1996-2021, Amazon.com, Inc. or its affiliates