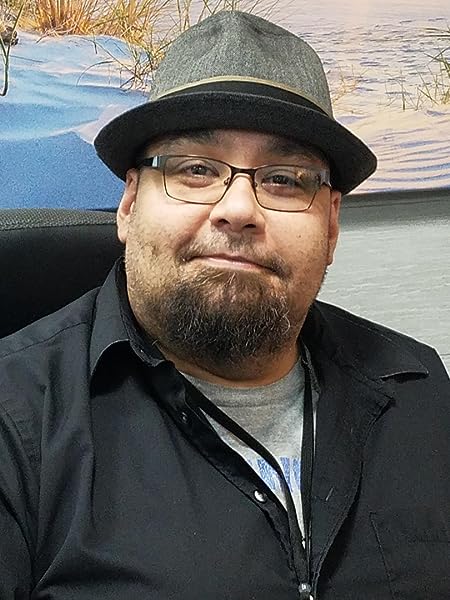 Joseph S. Samaniego is a historian from North Carolina specializing in medieval European History. He has a Master of Arts in History and has future plans to receive a PhD.

In his daily life, he is not only a Fantasy author with 5 titles to his credit, he also writes non-fiction and is a gifted fantasy cartographer.

When he is not spending time with his family, Joseph spends time reading, writing and playing video games. 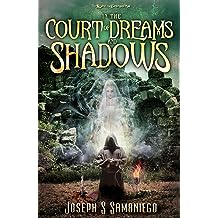 In the mage city of Corintha, the disgraced mage Braga is hell-bent on bringing the evil witch Iodoc back from a state of living death so that the world of suffering can end and his thirst for revenge quenched. On the other side of the coin is Ionius, the corrupt Grandmaster of the Knights of the Silver Seal, who wants to rid the world of mages. The mages follow the old gods while the Knights of the Silver Seal preach the Creator but who is right?

War is brewing as the two forces, holy knights and mages, are set to collide and the stories of these two men unfold. In the middle of this war is the second class mage Sabutai and his companions that are brought together in secret to protect the innocent lives of the mortal world. A new order of knights will rise up and be the line between good and evil, doing what’s necessary to protect the mortal realm and the innocents therein. However, forces from beyond seek to play a part in the outcome of the growing conflict.

Journey into the world of the Carolyngian Age and witness what may be the final days, unless the Shrouded Guild can stop the coming darkness! 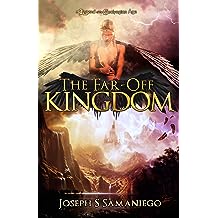 Two hundred years after the Gota settled on the Central Continent the word has moved on – but change is coming! Queen Aiko of the Quarmi Domain wishes to cleanse the world of heretics and the Sile Emperor, Kishtos III, seeks a mythical kingdom of power. Together they help a usurper regain his family’s throne but the puppet knows the truth. The old gods are never far away when such hatred and evil surround mortals.

Join the Kingdom of Lotcala, the Amazonian Queendom and their new dwarven allies as they battle the forces of evil in an attempt to protect their lands, their people and the mortal world!
Read more
Other Formats: Paperback 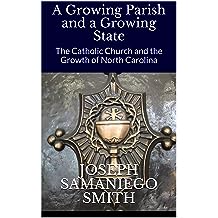 North Carolina has always had an interesting and varied history since the Lost Colony attempted the first settlement of the state. Part of that history was and still is in the form of an influx of Catholic citizens to the area. This began when North Carolina was still an English colony, being explored by intrepid settlers.

While we have ignored a great deal of that history, there are some examples where the Catholic Church brought a bigger influence than previously realized. From early settlers, laborers, and revolutionaries to the politicians and clergymen who helped to change the laws, North Carolina has always been a state that could look to the past to find a sense of the future.
Read more
Other Formats: Paperback 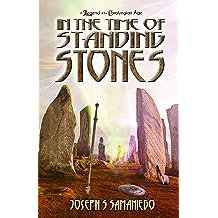 In the Time of Standing Stones: A Legend of the Carolyngian Age (Legends of the Carolyngian Age Book 1) Jun 7, 2019
by Joseph S Samaniego
( 2 )
$0.99
There are some evil women in this book and some angels. Samaniego treats them all with respect, showing them as powerful, smart, and talented. - Tiffany Christina Lewis, author of the Michael Taylor Series

One age comes to a close as great forces conspire to bring a new age to light!

In an ancient land, rulers have always fought for power but when warriors from the east land on the Central Continent an upheaval of power like never before unfolds. The world turns upside down as more secrets emerge that will shake the accepted ways to their core.

Kings Theodorif, Fenir and Haakon lead their people, the Gota, to new lands with the hopes to raid and conquer the lands but what they find instead of opportunities is an ancient evil bent of devouring the world. The once fertile lands have been damaged by centuries of war and the people are blinded by distrust and hate. It is not the lands that the three kings were promised.

Mortal kind faces its greatest threat as the Gota have to join their force with unfamiliar faces to ensure the survival or the mortal races while trying to establish a new home for their people. Succeed and perhaps they will flourish but to fail would mean the extinction of all that was good in the world.
Read more 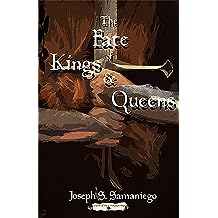 The Fate of Kings and Queens (Legends of the Carolyngian Age Book 4) Apr 5, 2021
by Joseph S Samaniego
( 2 )
$3.99
Joseph S. Samaniego is back with another action-packed novel from the Carolyngian Age. The Fate of Kings and Queens is a masterful telling of how two royals came together to create a new dynasty and the bloody war that had to be waged to secure their future. - Tiffany Christina Lewis, author of the Michael Taylor Series


For generations, the Kingdom of Lotcala and the Queendom of Amazon were as close as siblings. Through the years of war and commerce, they built an alliance that allowed both monarchies to prosper. One kingdom bred from ancient raiders and a queendom known for the fiercest warriors in the world.

Never had the two become one, though a few had tried. Now, after a broken engagement, Princess Syrena of Amazon follows a path to reunite with her lost love, Prince Gabriel of Lotcala. Some doubt their future success, but perhaps love could find a way.

Fate, however, would intervene. The world knew them both as the King and Queen of Lotcala and their reign for its peacefulness. However, they had to fight before they could claim such a rule. In the earliest days of their reign, war consumed their lives.

Journey to the Falcon Coast, to a time when war between the four major monarchies threatened to destroy a thriving land. Find out what really happened during a war that saw heroes rise and fall, all in a quest to end rivalries that had spanned generations.
Read more
Other Formats: Hardcover , Paperback 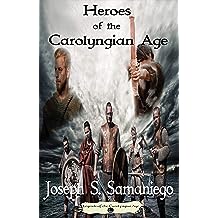 Five tales of famous and legendary figures of the Carolyngian Age seeking glory. Unheard tales of war, adventure and triumph! Prior to their roles as kings or queens, these warriors had to begin their path and many had to face the hardships of life outside the luxuries of a castle. Journey into the world of the Carolyngian Age and read the legends as they happen! New legends of warriors facing off against great odds, making new allies or righting wrongs.

For the first time anywhere read the tales of Rowena and her mercenary sisters, Princess Syrena fighting the Demon Boar, Godfrey the Conqueror and more.
Read more 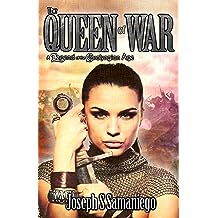 The Queen of War: A legend of the Carolyngian Age Nov 5, 2018
by Joseph Samaniego
( 3 )
$3.99
"Joseph has a unique talent for writing strong female characters. The heroines in “The Queen of War” were all excellent representatives of female strength and nobility." - Tiffany Christina Lewis, author of the Michael Taylor Series.


The world of the Carolyngian Age is about to change forever!

When darkness returned the oracles fell silent, unable to commune with the gods. With no guidance, the faith faded, and now, after centuries of abandonment, Crown Princess Amelia of Lotcala fears the future.

The first born in a kingdom born from war, Amelia is the first daughter to be first born in the thousand year history of Lotcala. That is the least of her concerns, however. Surrounded by bickering family with secret agendas, her life of training may not have prepared Amelia for the coming war. Due to inherit a kingdom on the brink of war, with invaders to the north, raiders from the east, and a family she cannot trust, she must not fail. She must not fall. Amelia has the fate of her family on her shoulders, and a kingdom to protect, from an enemy she can't see... or will she fail?

Set in the darkness of the Carolyngian Age one of the greatest dynasties sets to prevent its downfall while two evil queens and a greedy elf-lord fight to see the Kingdom of Lotcala and its royal family lost to the sands of time.
Read more 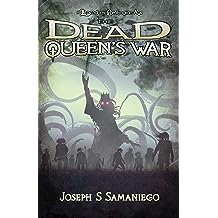 The Dead Queen's War: A Legend of the Carolyngian Age May 22, 2018
by Joseph S Samaniego
( 1 )
$3.99
As a deadly mage plague sweeps through one city, a second far-off city is plagued by internal power struggles from rival families that seek to topple one of the world’s most powerful families.


The Empire of Lotcala has seen its share of misfortune and war but in recent years they thought the fears from centuries ago were forgotten. When an ancient evil rises from the grave most are powerless to stop the spread of the darkness. It is now up to three unlikely companions driven by different motives to stop the coming onslaught of the plague and rival factions from killing everything they hold dear.


Witness the return of the Sybila, Queen of the Sea People, as she and her new allies battle her greatest foe, Iodoc the Dead Queen in what she hopes is the final battle. Now the battle is left up to those who can summon the courage to confront this evil queen of the dead and stop her from conquering the world.


Set in the waning centuries of the Carolyngian Age, greed and power have taken the place of honor and duty as the path to glory. Could this be the spark that the world needs to return to the days of old or are the days of old what the world should avoid?
Read more
Other Formats: Paperback 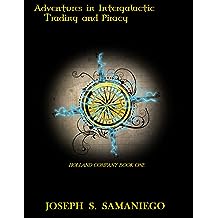 Adventures in Intergalactic Trading and Piracy: The Holland Company Jan 3, 2018
by Joseph S Samaniego
$1.99
Centuries into the future, mankind has ventured into the far reaches of the universe and made countless discoveries, including the existence of other species and better forms of space travel through the wonders of their technology. Specially fitted sailing ships roam the open expanse of space and trade companies have formed to control the enterprises of empires!

In such a universe only the rich rule, that is until an upstart trade company founded by war hero John Holland enters the fray with his motley crew of pirates and soldiers turned sailors.

Past crimes and new sins collide in dramatic ways as the crew learns to get along with each other while trying to turn a profit. Who will reign when all the secrets come out and the ships leave port?
Read more
Other Formats: Paperback