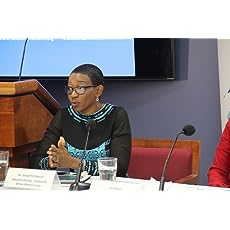 J. Jarpa Dawuni is Assistant Professor of Political Science at Howard University, Washington D.C.. Her two recent books are International Courts and the African Woman Judge: Unveiled Narratives (Routledge, 2018) co-edited with Judge Akua Kuenyehia and Gender and the Judiciary in Africa: From Obscurity to Parity? (Routledge, 2016), co-edited with Gretchen Bauer. She is the founder and Executive Director of the non-profit Institute for African Women in Law (IAWL) which focuses on enhancing the capacity of women in the legal professions in Africa and the Diaspora. She is a Carnegie African Diaspora Fellow and a Fulbright Specialist Scholar.
Read more 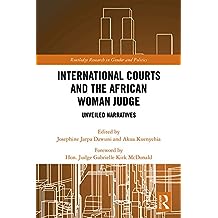 A sequel to Bauer and Dawuni's pioneering study on gender and the judiciary in Africa (Routledge, 2016), International Courts and the African Woman Judge examines questions on gender diversity, representative benches, and international courts by focusing on women judges from the continent of Africa.

Drawing from postcolonial feminism, feminist institutionalism, feminist legal theory, and legal narratives, this book provides fresh and detailed narratives of seven women judges that challenge existing discourse on gender diversity in international courts. It answers important questions about how the politics of judicial appointments, gender, geographic location, class, and professional capital combine to shape the lives of women judges who sit on international courts and argues the need to disaggregate gender diversity with a view to understanding intra-group differences.

International Courts and the African Woman Judge will be of interest to a variety of audiences including governments, policy makers, civil society organizations, students of gender studies, and feminist activists interested in all questions of gender and judging. 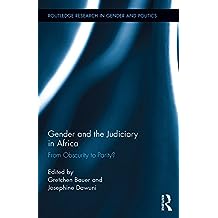 Gender and the Judiciary in Africa: From Obscurity to Parity? (Routledge Research in Gender and Politics Book 5) Oct 30, 2015
by Gretchen Bauer, Josephine Dawuni
$50.30

Between 2000 and 2015, women ascended to the top of judiciaries across Africa, most notably as chief justices of supreme courts in common law countries like Ghana, Nigeria, Sierra Leone, Gambia, Malawi, Lesotho and Zambia, but also as presidents of constitutional courts in civil law countries such as Benin, Burundi, Gabon, Niger and Senegal. Most of these appointments was a "first" in terms of the gender of the chief justice. At the same time, women are being appointed in record numbers as magistrates, judges and justices across the continent. While women’s increasing numbers and roles in African executives and legislatures have been addressed in a burgeoning scholarly literature, very little work has focused on women in judiciaries. This book addresses the important issue of the increasing numbers and varied roles of women judges and justices, as judiciaries evolve across the continent.

Scholars of law, gender politics and African politics provide overviews of recent developments in gender and the judiciary in nine African countries that represent north, east, southern and west Africa as well as a range of colonial experiences, postcolonial trajectories and legal systems, including mixes of common, civil, customary, or sharia law. In the process, each chapter seeks to address the following questions:

Timely and relevant in this era in which governmental accountability and transparency are essential to the consolidation of democracy in Africa and when women are accessing significant leadership positions across the continent, this book considers the substantive and symbolic representation of women’s interests by women judges and the wider implications of their presence for changing institutional norms and advancing the rule of law and human rights.