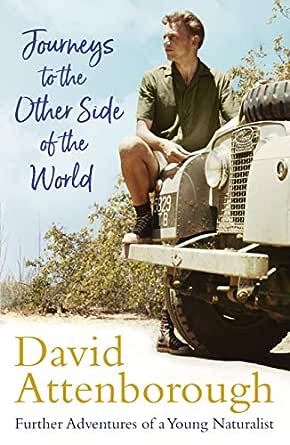 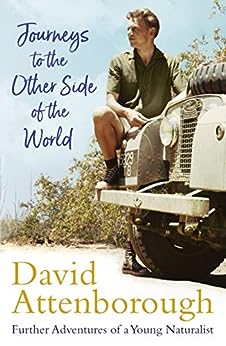 Journeys to the Other Side of the World: further adventures of a young David Attenborough Kindle Edition

Sir David Attenborough is a broadcaster and naturalist whose television career is now in its seventh decade. After studying Natural Sciences at Cambridge and a brief stint in publishing, he joined the BBC. Since the launch of his famous Zoo Quest series in 1954 he has surveyed almost every aspect of life on earth and brought it to the viewing public. His latest program, Blue Planet II, was the most-watched nature documentary of all time.
--This text refers to an alternate kindle_edition edition.

Praise for Adventures of a Young Naturalist
"Attenborough relates his adventures of sixty years ago with typical British wit . . . This is a great book for anyone who wants to vicariously travel like an old-fashioned adventurer and seeks to understand how far we have come in developing a protective attitude toward wildlife.
―Frans de Waal, The New York Times

"A rare glimpse of a fledgling David Attenborough in the wild."―Sloane Crosley, Vanity Fair

"Everyone who enjoys wildlife programming on television owes a debt of gratitude to David Attenborough. Attenborough--zoologist by training, TV man by profession--pioneered the concept over sixty years . . . He went out in the field, lived in the jungle for weeks at a time, and wrestled everything from caimans to boa constrictors . . . His new memoir, Adventures of a Young Naturalist, collects accounts of three of his first trips into the wilderness, stories that amaze and fascinate."―Curt Schleier, Minneapolis Star Tribune

"A marvelous book, an invaluable record of David Attenborough's first three journeys . . . What makes this elegant book so unputdownable is that Attenborough makes the viewer feel inside the picture, part of his team . . . On the page, as on the screen, he shares, shows, explains. His style is disarmingly self-deprecating, utterly engaging."―Telegraph

"One of the last of the pith-helmeted, noble British adventurers, he tells a host of wondrous tales set in the last years of the crumbling British Empire and he tells them beautifully . . . His writing is as impressive and as enjoyable as his TV programs and there can be no higher praise."―Daily Express --This text refers to an alternate kindle_edition edition.

4.8 out of 5 stars
4.8 out of 5
142 global ratings
How are ratings calculated?
To calculate the overall star rating and percentage breakdown by star, we don’t use a simple average. Instead, our system considers things like how recent a review is and if the reviewer bought the item on Amazon. It also analyzes reviews to verify trustworthiness.
Top reviews

Unclebob53703.
5.0 out of 5 stars Terrific arm chair adventure
Reviewed in the United States on April 27, 2020
Verified Purchase
I've had this book for 30 years, got this reprint for my Mom and she loves it. His sense of humor is priceless, and what he goes through to get his critters is sometimes staggering. Wish this would come out in Kindle version.
Read more
One person found this helpful
Helpful
Comment Report abuse

Kris McInerney
5.0 out of 5 stars Great
Reviewed in the United States on September 20, 2019
Verified Purchase
Very nicely written book. I like the way crafted the story and how he described all the adventuring hardships they endured in a "well that's just what had to be done" attitude. This book has improved my admiration for a great man.
Read more
Helpful
Comment Report abuse

Karina S Thibodeau
4.0 out of 5 stars Very Educational and Entertaining!
Reviewed in the United States on July 27, 2020
Journeys to the other side of the World by David Attenborough was what I thought a very interesting read. His is entertaining and kept me engaged until the end. The writing was wonderful I felt like I was right there with him. It was interesting to learn about different people and cultures. This was an enjoyable and educating read.
Read more
Helpful
Comment Report abuse
See all reviews

Peter R
5.0 out of 5 stars Excellent book
Reviewed in the United Kingdom on January 18, 2019
Verified Purchase
A superb book with great descriptions of the culture and animal collecting in the countries that the author visited in his early career. David Attenborough has a knack of making you feel you are with him on his adventures.
Read more
3 people found this helpful
Report abuse

Amazon Customer
5.0 out of 5 stars Easy to read
Reviewed in the United Kingdom on June 7, 2019
Verified Purchase
Loved the book. As with all David Attenborough books it was informative but easy to read and you see how difference the world is now to how it was when he was collecting stories and animals. Enjoyed the book was very good condition for the money and quick delivery. +++++
Read more
2 people found this helpful
Report abuse

The Antyman
5.0 out of 5 stars Great read as always from Sir David
Reviewed in the United Kingdom on January 18, 2019
Verified Purchase
this was for my wife who reads a lot on her journeys from to work. Sir David is a wonderful wordsmith and this detail his earlier exploration around the wold. this book from a fascinating man.
Read more
3 people found this helpful
Report abuse

A. M. B. Williams
5.0 out of 5 stars Great book for present
Reviewed in the United Kingdom on September 22, 2019
Verified Purchase
Great book
Read more
One person found this helpful
Report abuse
See all reviews