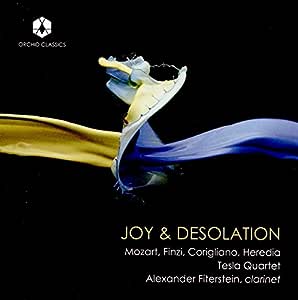 Following its hugely acclaimed debut on Orchid Classics, the Tesla Quartet returns alongside clarinettist Alexander Fiterstein in works by Mozart, Finzi, John Corigliano and Carolina Heredia. In its latest Orchid release, the Tesla Quartet offers fresh and vibrant interpretations of repertoire ranging from the Classical epoch to the present day. Mozarts exquisite Clarinet Quintet finds an outstanding advocate in this performance by Alexander Fiterstein, and Finzis autumnal Bagatelles, originally composed for clarinet and piano, are heard here in a delightful arrangement by Christian Alexander. Contemporary American composer John Corigliano wrote his deeply-moving Soliloquy in memory of his late father, and Argentinian composer Carolina Heredia wrote Ius in Bello in 2014 as a fascinating exploration of social justice, using Latin-American popular styles to add colour and depth to the works tensions, its dream-like quality evoking the desire for peace. Praise for the Tesla Quartet performing Haydn, Ravel & Stravinsky on Orchid Classics: Everything appears to evolve naturally out of what has gone before with a radiant warmth and affection that proves increasingly contagious on repeated listening... An outstanding recording debut. BBC Music Magazine (December 2018 Recording of the Month, Double 5 Stars)

3.0 out of 5 stars
3 out of 5
1 customer rating
How does Amazon calculate star ratings?
Amazon calculates a product’s star ratings based on a machine learned model instead of a raw data average. The model takes into account factors including the age of a rating, whether the ratings are from verified purchasers, and factors that establish reviewer trustworthiness.
Top Reviews

Fanfare Archive
3.0 out of 5 stars A talented quartet pays too much attention to sounding gentle and exquisite
Reviewed in the United States on April 25, 2020
Huntley Dent, Fanfare magazine

An album titled Joy and Desolation implies emotional extremes that are not quite delivered by the Tesla Quartet and clarinetist Alexander Fiterstein. Until the last piece, which expresses angst and agitation, the performances are unusually gentle. The title “Quiet and a Little Disquiet” would have been more appropriate. I admired the Tesla’s debut album in 2018 (Fanfare 42:5), which gave a hint at the subdued interpretations heard here. The slow movement of Mozart’s Clarinet Quintet justifies the group’s nuanced gentleness by creating a hushed mood that holds your attention. But the remaining three movements, and particularly the two outer ones, are under-inflected and, for me at least, unacceptably relaxed. Poise is one thing, passivity another.
The rest of the program consists of material that will be very unfamiliar to most listeners. I imagine the chief reason for including Gerald Finzi’s Five Bagatelles and John Corigliano’s Soliloquy is their instrumentation; the availability of works for clarinet quintet must be fairly limited. In fact the Finzi was originally written for clarinet and piano. The pieces were begun in the 1920s but not finished until the Second World War, when Finzi could find time off from his work at the Ministry of War Transport. The conventional English pastoral tone of the Bagatelles would seem to make them the work of an hour, so to speak, and they have a lulling effect. The fourth and fifth pieces, titled “Forlana” and “Fughetta,” display a bit more then generic appeal, but Finzi was probably right to judge the set as trifling.
The booklet contains personal responses from the performers, and cellist Serafim Smigelskiy says of Corigliano’s Soliloquy from 1995 that its “austere ambience” brings evocations of “longing and uncertainty.” The impetus for the work was to pay tribute to the composer’s father, John Sr., who served as concertmaster of the New York Philharmonic for 23 years. The violin is the speaker of the soliloquy, alternating with the clarinet—the two voices might be considered father and son. The music unfolds in measured sentences of long-held notes for the most part. There isn’t much variety, and I found the piece unremarkable, even though the elegiac mood is well sustained.
Only the final work on the program made me sit up and pay attention. Argentinian composer Carolina Heredia wrote Ius in Bello in 2014 on commission from a bucolic music festival in Vermont. The effect of the music isn’t very connected to the title, which translates as “law in war,” and refers to the moral principles laid down for combatants. But war and conflict are evoked here as a mood conveyed by a wailing clarinet and string effects from pizzicato and col legno to jolting glissandos and sul ponticello jitters. We’re told that Latin American popular songs play a part, but none of this verbal description helps much. Ius in Bello is seven minutes of highly original and affecting music, expressing angst with hints of unreachable peace.
The Tesla Quartet was founded at Juilliard in 2008 and went on to earn acclaim early on. The fact that they aim to play so exquisitely in the Mozart Quintet is also a general aim, but it can be carried too far. My overall response to this release is disappointment when I consider how well the Heredia piece is played—nothing else on the disc rises to that standard or exploits the talents of these performers to the full. If they continue to set meaningful challenges, however, I anticipate more future success. It’s good to end with hopeful encouragement.